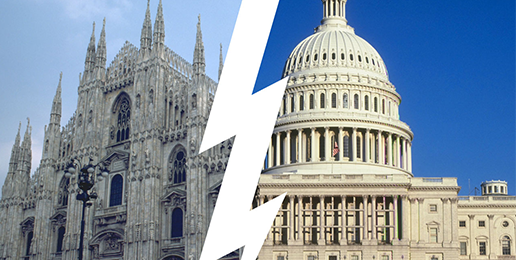 I’d like to offer a few words about the separation of church and state—a concept long abused by “progressives.”

The religion clauses of the First Amendment were intended to protect religion from the intrusive power of the state, not the reverse. The Establishment Clause states that “Congress shall make no law respecting the establishment of religion.” That does not mean religious convictions are prohibited from informing political values and decisions. To expect or demand that political decisions be divorced from personal religious beliefs is an untenable, unconscionable breach of the intent of the First Amendment which also includes the oft-neglected Free Exercise Clause which states that “Congress shall make no law prohibiting the free exercise of religion.”

People from diverse faith traditions and no faith could all arrive at the same position on a particular public policy. For example, although Orthodox Jews, Muslims, Catholics, Baptists, and atheists may all oppose abortion because they value human life, the reasons (or motives) for that valuation of life differ.

If there is a secular purpose for a law (i.e., to protect incipient human life), then voting for it—even for religious reasons—does not violate the Establishment Clause of the First Amendment. The source or motives of the various parties’ desires to protect incipient life are not the concern of the government. It would be not only absurd but also unethical for the government to try to ascertain the motives or beliefs behind anyone’s opposition to abortion and equally unethical for the government to assert that only those who have no religious faith may vote on abortion laws. Such an assertion would most assuredly violate the Free Exercise Clause of the First Amendment.

forcing religious arguments to be restated in other terms asks a citizen to ‘bracket’ religious convictions from the rest of her personality, essentially demanding that she split off a part of her self . . . [T]o bracket [religious convictions] would be to bracket—indeed, to annihilate—herself. And doing that would preclude her—the particular person she is—from engaging in moral discourse with other members of society.

To paraphrase First Things founder, Richard John Neuhaus, that which is political is moral and that which is moral, for religious people, is religious. It is no less legitimate to have political decisions shaped by religion than by psychology, philosophy, or self-serving personal desire.

If allowing religious beliefs to shape political decisions did represent a violation of the Establishment Clause and an inappropriate commingling of religion and government, then American history is rife with egregiously unconstitutional actions, for religious convictions have impelled some of our most significant social, political, and legal changes including the abolition of slavery, antiwar movements, opposition to capital punishment, and the passage of civil rights legislation.

“Progressives” seem to have no objection to people of faith participating in the democratic process so long as their views comport with “progressive” positions. “Progressives” never cry foul when Quakers or Catholics oppose war because of their religious convictions, and “progressives” do not object that Catholic opposition to the death penalty represents a violation of the separation of church and state. When conservative people of faith participate in the political process, however, suddenly the Establishment Clause has been violated.

Dr. Martin Luther King Jr.’s “Letter from Birmingham Jail” is replete with references to his Christian faith which informed his belief about the inherent dignity, value, and rights of African Americans, a belief which he lost his life to see enshrined in law. He wrote what would now certainly generate howls of opposition if expressed by a conservative:

The same people who argue vociferously against the presence of religiously informed political decisions that are conservative in nature are curiously silent with regard to those Catholics, Jews, United Methodists, Presbyterians, Lutherans, Unitarians, and Episcopalians who were politically active in the movement to effect speech codes or revolutionize marital laws. One could argue that those who attend houses of worship that support legalized same-sex unions are similarly attempting to enshrine in law their religious beliefs.

When politicians like presidential candidate Pete Buttigieg, former president Barack Obama, and Senator Rob Portman or celebrities like Jason Collins cite their Christian beliefs as the justification for their support for the redefinition of marriage, or fiscal policies, no one in the press or homosexual community accuses them of violating the separation of church and state.

Neuhaus argues persuasively in his book The Naked Public Square that a polity denuded of religion will be clothed soon enough in some other system that functions as religion by providing “normative ethics.” A democratic republic cannot exist without objective normative ethics that render legitimate the delimitation or circumscription of individual rights.

Historically, the sources of the absolute, transcendent, objective, universal truths that render legitimate our legal and judicial systems have been “the institutions of religion that make claims of ultimate or transcendent meaning.” Neuhaus explains that this “does not represent an imposition of the private into the public spheres, but rather an expansion or transformation or recollection of what is public.” He argues that when religion is utterly privatized and eliminated as a “source or transcendence that gives legitimate and juridical direction and form, something else will necessarily fill the void, and that force will be the state.”

If the body politic claims that there are no absolutes or delegitimizes religion as an arbiter of right and wrong, or good and evil, then the state will fill the vacuum, relativizing all values, and rendering this relativization absolute. Many would argue that there is little indication that society has heeded Neuhaus’ warning about the political implications of society’s rejection of religiously derived transcendent truths. And so, the coercive power of the state increasingly fills the space vacated by religious institutions.

Lawmaking absent an understanding that there exist moral truths that are objective and universal would represent an illegitimate and hubristic arrogation of power by the state. Acknowledging that there is objective truth regarding what is right and wrong and that it is universal and knowable is essential to democratic institutions. What sense does outrage at human rights violations make if we assert there are no universal, transcendent, eternal, objective truths? And if we agree that these truths exist and that they transcend the subjective opinions of any particular individual, then what is their source other than a supernatural, eternal, transcendent being?

Some argue that reason alone is sufficient to serve as the objective source of truth, but a recollection of Hitler’s eugenic reasoning reveals the problem with reliance solely on man’s reason. Claims of unalienable, self-evident rights, as our founding fathers understood them, both presume and require for justification, the existence of God. Robert L. Toms wrote that it was this understanding that generated “the concept that the state, the monarch, the dictator, the tribal leader, was no longer a deity to be obeyed unquestionably.” And the state neither creates ex nihilo nor confers our fundamental rights but, rather, provides legal protection for extant rights.

Charges of violating the separation of church and state are selectively hurled. Remember that next time a lefty tells you your political views must be severed from your religious views.