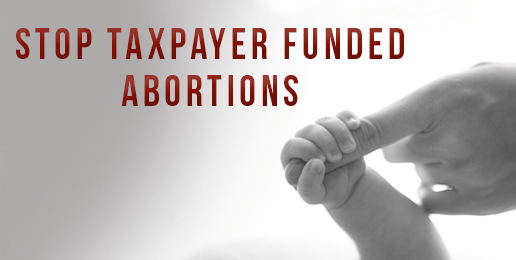 Today, State Representative Peter Breen (R-Lombard) and State Senator Dan McConchie (R-Hawthorn Woods) filed the “No Taxpayer Funding for Abortion Act,” which would prohibit units of government in Illinois from using taxpayer funds for elective abortions, reversing key provisions of the recently enacted House Bill 40. Breen and McConchie are pressing for full debate and a floor vote on the measure during the upcoming fall veto session later this month, before HB 40 goes into effect in 2018.

“With the signing of HB 40, Illinoisans will be put on the hook for roughly 75% of the state’s 40,000 annual elective abortions,” said Breen. “Strong majorities of Illinoisans, especially folks in the suburbs and downstate, oppose taxpayer funding of abortions, and the No Taxpayer Funding for Abortion Act will respect both their pocketbooks and their consciences. Considering the average cost of $1,000 per Medicaid abortion, we don’t have the $30 million required to cover 30,000 abortions every year.”

“The No Taxpayer Funding for Abortion Act is a critical piece of legislation that respects the moral and fiscal concerns of our residents,” said McConchie. “In states that have legalized Medicaid abortions, over 50% of all abortions become taxpayer-funded. The residents in my suburban district are overwhelmingly opposed to this new spending scheme.”

The legislators are relying on data from the Guttmacher Institute, the former research arm of Planned Parenthood, about income levels of those seeking abortions and payment data from other states that provide elective abortion funding. Guttmacher indicates that 75% of women seeking abortions are below 200% Federal Poverty Level, and that, in states with elective abortion, over 50% of all abortions are paid for by Medicaid. See, https://www.guttmacher.org/report/characteristics-us-abortion-patients-2014. Because Illinois’ Medicaid system extends eligibility to pregnant women up to at least 213% Federal Poverty Level, those who will be eligible for taxpayer funded abortions may be even higher than 75%. See, http://www.dhs.state.il.us/page.aspx?item=14091 (pregnant women considered at least family size 2, as Illinois law counts unborn children in family size). The legislators also received information from the Illinois Department of Healthcare and Family Services showing that the average cost, over the past five years, for a Medicaid abortion and ancillary services is approximately $1,000 per procedure.

Breen drafted the No Taxpayer Funding for Abortion Act on the model of the federal Hyde Amendment, which prevents federal funding for abortions, other than for abortions sought in connection with pregnancies that result from rape or incest, or that threaten the life of the mother. Abortions under these circumstances constitute roughly 1% of all abortions. Federal law already requires states to provide Medicaid abortions under these three conditions, and the proposed Act recognizes those federal provisions.

While the No Taxpayer Funding for Abortion Act reverses the substantive provisions of HB 40 and prevents taxpayer funding for abortion at all levels of government, it adds new public policy language on abortion, not including controversial “trigger language” about Roe v. Wade that was at issue in HB 40.

“The ‘trigger language’ in HB 40 had no legal effect, and there’s no need to reopen a theoretical debate about language from over 40 years ago. Instead, we wanted to start fresh with updated language and concepts that reflect the majority position of Illinoisans, especially folks in the suburbs and downstate, who care very deeply about this issue,” Breen added.

“This controversial and culturally divisive act should not be one that taxpayers should be forced to fund,” said McConchie. “Likewise, there is no good reason for taxpayers to be on the hook for someone else’s personal decision.”

Additionally, while the federal government typically matches a state’s Medicaid expenses, it will not do so for elective abortions. Breen has stated previously that, based on the estimated direct cost to the state of $30 million for abortions, the true impact to the Medicaid system is actually double that, $60 million in lost medical services.

Within an hour of the filing of the No Taxpayer Funding for Abortion Act, numerous legislators from across Illinois joined the bill as cosponsors. The bills are pending as HB 4114 & SB 2241. Legislators are also considering legal action in the coming weeks to challenge whether HB 40 can be effective before June 1, 2018, due to it being held beyond the May 31 deadline set by the state constitution for the passage of bills. The current effective date is set at January 1, 2018, and legislators estimate the five-month difference in effective dates could prevent taxpayer funding of 10,000 abortions or more.