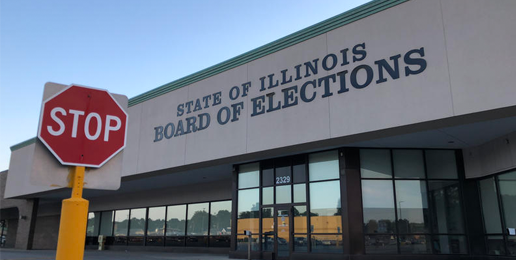 As Election Day November 3 nears tensions in the country continue to run high. The candidates, parties, and voters are expressing worry over mail-in balloting which is being promoted over in-person voting due to the recent pandemic. In the midst of this unease, the Illinois Conservative Union (ICU), along with Judicial Watch, have filed suit against the Illinois State Board of Elections (SBE).

The suit, filed September 21, stems from a request for a list of voter data sent by the ICU to the Illinois State Board of Elections in August 2019, which was denied. According to Judicial Watch, the request sought “information about the maintenance of voter rolls, including the most recent voter registration list for Illinois.” The complaint filed in filed in court states the request noted the records “would be used solely for purposes intended by federal law, namely, to ensure the accuracy and currency of the official list of eligible voters.”

The Election Board denied the request based on the claim that only governmental bodies and political committees were allowed to view such records. A few members of the Illinois Conservative Union were eventually allowed to visit the Board of Elections office in Springfield to review Illinois’ millions of voter records. However, they could only do so “one at a time on a computer terminal, with no ability to sort or organize records,” said Judicial Watch.

A media release from the Illinois Conservative Union stated, “The SBE refusal to provide voter data as requested is contrary to multiple court decisions around the country ruling that citizen rights to voter data under the NVRA cannot be infringed by state law.”

The attorney handling the case is David Shestokas, who is also an advisor to the Heartland Institute. “ICU’s original request, followed by the notice of violation to Executive Director Steve Sandvoss and the Board of Elections, advised SBE of the federal court orders ruling that the NVRA supersedes state law,” he noted. “The Board’s obligations are clear. Failing to comply results in a waste of taxpayer resources and has delayed ICU’s work on behalf of Illinois voters.”

Its partner in the suit, Judicial Watch, is a Washington D.C. based conservative action group that files Freedom of Information requests on government officials and agencies to investigate alleged misconduct. Judicial Watch filed the lawsuit in the United States District Court in the Northern District of Illinois (Illinois Conservative Union et al v. Illinois et al. No. 1:20-cv-05542).

According to Judicial Watch, its research has discovered 14 out of 102 counties (14% of all counties) in Illinois “have more registered voters than citizens over 18, while the state as a whole has 660,000 inactive registrants.”

“This lawsuit aims to open up Illinois voting records so private groups can tell whether they are dirty,” said Judicial Watch President Tom Fitton. “Illinois voters and citizens have a right to review election rolls under federal law and Illinois’ refusal to make them available suggests the state knows the rolls are a mess and won’t stand the light of the day.”

Carol Davis is Chair of the Illinois Conservative Union. “When crafting the NVRA, the intent of Congress was to enable the public to monitor the accuracy of our nation’s voter rolls,” she said. “By denying citizens access to the rolls, state election authorities are thwarting the intent of this legislation, specifically Section 8. Illinois has long been the target of jokes about our elections, such as ‘dead people voting’. Now is the time to verify the accuracy of Illinois voter rolls and put an end to our state’s embarrassing reputation regarding the lack of election integrity.”

Judicial Watch isn’t the only organization that has found irregularities in the state’s voter rolls.

In January 2020, WGN Chicago reported a “programming error in a signature pad at driver services facilities led to hundreds of non-U.S. citizens accidentally being registered as voters.” Once the problem was discovered it was fixed, and of the 574 individuals who were registered to vote, only 16 did.