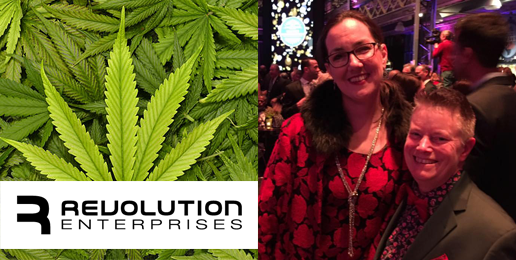 The unholy trinity of J.B. Pritzker, creepy State Representative Kelly Cassidy, and her creepy “wife” Candace Gingrich (who goes by the pronoun “they,” #eyeroll) continue in their efforts to destroy whatever good remains in Illinois. (And yes, people who promote feticide, taxpayer-funding of feticide, homosexuality, and cross-sex impersonation are creepy—uber-creepy.) Now, through the legalization of recreational marijuana, Pritzker, Cassidy and their ideological allies are trying—by sucking money out of Illinoisans’ pockets while keeping them stoned—to dig Illinois out of the fiscal gorge liberals  have dug.

If it’s not bad enough that Gingrich has worked for the Human Rights Campaign for 23 years, the Chicago Sun-Times reported on July 31 that she,

will serve as vice president and head of business development for Revolution Florida, a sister company to Illinois-based Revolution Enterprises. Revolution makes a variety of cannabis products, including food, beverages, topicals and pet products…. Gingrich… will also serve as the company’s ambassador to the LGBTQ community. Gingrich… plans to establish LGBTQ-focused medical cannabis treatment centers and increase economic opportunities for LGBTQ people in the sector.

Gingrich’s fake-wife Kelly Cassidy was the lead sponsor of the “massive marijuana legalization measure signed into law last month,” which followed close on the heels of the massive human slaughter bill that Cassidy led the charge on. But the creepy couple assert that since Gingrich was hired after the bill passed in late May, there’s nothing to see here folks, so just move along.

Pritzker too scoffs at the idea that there is any connection between his support for the pot bill and the business interests of relatives, in his case his second cousin Joseph “Joby” Pritzker and Joseph Pritzker’s father Nicholas J. Pritzker who head up a capital investment firm “that has… poured money into a pair of cannabis-related ventures, PAX Labs and MJ Freeway.”

Tao Capital Partners, which Nicholas Pritzker co-founded, was an early investor in the e-cigarette company JUUL, which “was developed by the cannabis vaporizer company PAX.” Due to the concerns of many that the slow death of the tobacco industry will result in JUUL moving into the burgeoning cannabis industry, on June 7, U.S. Rep. Raja Krishnamoorthi, chair of the House Subcommittee on Economic and Consumer Policy, sent a letter to JUUL requesting, among other things, this:

All documents, including memoranda and communications, referring or relating to proposals, plans, and/or intended partnerships or collaborations between JUUL and any cannabis-related companies, including but not limited to Cronos Group [a Canada-based cannabis company].

Last year, Pritzker’s campaign claimed “the governor had not spoken” to his relatives “about marijuana policy or anything else ‘in a long time.’” First, how long is a long time? Second, not speaking to family members about policy pertaining to business interests related to marijuana that he knows they have is hardly a defense.

Oh, but there’s more. The Sun-Times quoted Dr. Kevin Sabet, president of Smart Approaches to Marijuana, who exposed that the Chicago way of profiting while harming Illinoisans thrives:

Governor Pritzker worked to buy off legislators during the budget process in closed door meetings and now his family will now vastly benefit. Senator Van Pelt was putting plans in place to obtain a marijuana license while the bill was being written.

According to a May 21 article in the Sun-Times, starting last January “Van Pelt was marketing… investment seminars and leading a company that intends to obtain licenses to grow and sell marijuana in the state, she also was named as co-sponsor of a bill to legalize the drug statewide.”

Last January, Senator Patricia Van Pelt (D-Chicago) began advertising on social media her $100 seminars on how to profit from recreational pot once it was legalized. According to the Sun-Times, “Less than four months later, those seminars and another cannabis-related business Van Pelt is involved with are being investigated by the Illinois Secretary of State’s office.”

A damning news report from WCIA in Springfield on Van Pelt’s “scheme,” reveals that scheming isn’t new to Van Pelt:

In 2015, while in office, she promoted a multi-level marketing pyramid scheme that later ended abruptly when its owners were convicted for dodging taxes and defrauding investors of $4 million dollars.

The Sun-Times reported the extent of Van Pelt’s troubling entanglements with the cannabis industry:

In addition to charging nearly $100 to watch her online cannabis investment seminars, Van Pelt also serves as the president of WaKanna For Life. The multilevel marketing company… aims to win licenses to grow and sell pot, according to company CEO Melissa Boston-Atoyebi.

On April 20, considered a holiday among pro-pot advocates, Van Pelt and her co-investors sold tickets to a seminar they held on the cannabis industry at the Harold Washington Cultural Center in Bronzeville.

According to WCIA, Van Pelt’s actions represent not only a violation of ethics guidelines for lawmakers but perhaps even state law:

Undeterred by ethics laws that prohibit public officials from using their office to enrich themselves, Van Pelt uses her personal Facebook page to post images of her private meetings with Governor J.B. Pritzker, including images of March 21st Legislative Black Caucus meeting agenda which outlined how the state should prioritize marijuana shop licenses for black business owners…. Van Pelt’s personal involvement in a company that could reap handsome profits in the wake of legalization has raised ethical questions about the potential for a conflict of interest. Several members of the Legislative Ethics Commission, who are legally restricted from discussing open investigations, said they were unaware of Van Pelt’s activities, but acknowledged that her actions were troublesome, and that they could easily trigger an ethics complaint to the Legislative Inspector General.

Van Pelt signed on to the recreational marijuana bill as a co-sponsor in early May. The WCIA exposé came out on May 14. The Sun-Times reported that shortly after her scheme was exposed,

New conflict of interest provisions were added to the marijuana measure just before the Illinois Senate passed it, banning lawmakers and their family members, as well as state employees, from being able to get a cannabis business license for two years.

Then on May 15, Van Pelt was removed as a co-sponsor of the bill.

The creepy actions of creepy leaders like Pritzker, Cassidy, and Van Pelt help explain the growing movement to have Chicago go its own way, that is to become a separate state. And they help explain the mass exodus of Illinoisans to places with green pastures rather than fetid swamps.

Liberals to Make Illinois a Slaughterhouse Extraordinaire
b
a
x
r