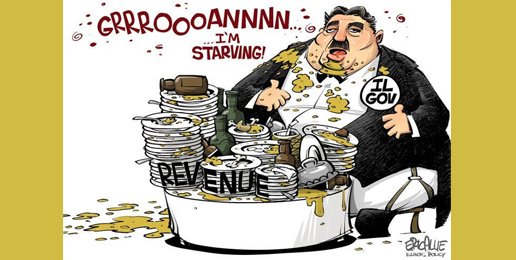 The news out of Washington, D.C. this spring is that President Donald Trump and the Republican majorities in Congress plan on cutting taxes. The unsurprising news out of Springfield, Illinois is that General Assembly Democrats are planning to raise taxes.

Also not surprising is that there is a hot debate about whether the GOP tax cut efforts in D.C. can succeed. There is no debate, however, about Illinois Democrats’ accomplishing their mission. Especially when Republicans, including Governor Bruce Rauner, appear poised to help the Democrats.

What is also not debatable is whether raising taxes in Illinois will be enough to make ends meet in a state where spending continues to be out of control. It won’t be.

Sometimes a trip to dictionary.com is helpful even when we all know the definitions. The first word for today is “insatiable”:

As in an insatiable hunger for more of your tax dollars.

No one will ever provide the liberal Democrats in Illinois enough money to make them happy. I offer as proof the Illinois government employee pension systems. If Republicans would just use some of that Bruce Rauner/Ken Griffin money to get the word out about how corrupt those systems are, maybe Republicans would start to win more elections here.

Here is the title of an article from the Illinois News Network earlier this week: Study: Illinois’ public pensions are worse off than state claims. From the article (and notice the use of the word “bottomless“):

Illinois has on hand only 29 percent of the funds needed to meet the promises made to current and future retirees. That’s the worst record of any state, and [Hoover Institution Senior Fellow Joshua] Rauh concludes that for the state to stop sinking further into debt, it would have to contribute more than twice what it contributes now.

Illinois now devotes nearly 25 percent of its state budget to the state worker pensions, so doubling that figure means close to half of the state’s revenues would have to go to pensions to avoid accumulating further debt.

Putting more money in the current system is futile, according to Glennon.

“The smart ones already know the current situation, but they’re not honest enough to talk about it in public,” he said.

A dozen years ago pension expert Bill Zettler began talking about it — and both political parties ignored his warnings. Bill regularly pointed out the simple truth that if something is impossible — it won’t happen.

That’s our second word for the day: impossible.

In that same Illinois News Network article, Mark Glennon merely confirmed what Bill Zettler had to say many years ago:

The promises that have been made to retirees in Illinois eventually will have to be broken, and the pensions won’t be made in full, according to Glennon.

“Ultimately, I think that’s unavoidable …” he said. “The numbers are far beyond insurmountable already.”

Getting back to the word “impossible” — as I wrote nine years ago, we have two competing impossibilities. Right now there isn’t support to make the needed changes, and yet there isn’t enough money to meet the obligations.

How do we get to a solution? Until public support is rallied — solving the pension problem in Illinois is “incapable of being done, undertaken, or experienced.” It is “incapable of occurring or happening.”

The credit rating agencies understand the situation in Illinois clearly. Note this headline from Crain’s Chicago Business: “Illinois’ credit rating slashed to a cut above junk.” Need I define the word “junk”?