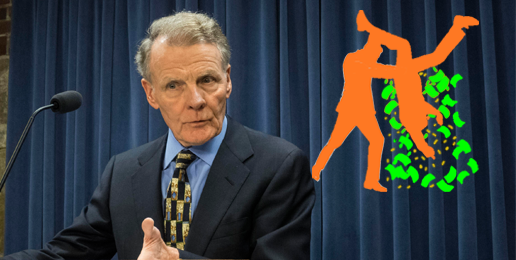 A Progressive Income Tax Proposal Will Not Satisfy the Illinois Taxeaters
Written By John Biver   |   05.02.18
PRINT

Back in the 1990s, Illinois conservatives watched as Republican governors cooperated with General Assembly Democrats to lay a foundation for our state’s current fiscal disaster. Today, as 25 percent of the state’s budget goes to paying overly-generous pensions for government employees, some sleepy slow-to-learn Republicans are waking up to the fact that something is amiss.

The good news is that Democratic candidate for governor J.B. Pritzker has a plan to solve our state’s revenue problem. Of course, I’m kidding: we don’t have a revenue problem, we have a spending problem.

A proposal for a graduated income tax in Illinois is being sold in comical fashion by the comical Center for Tax and Budget Accountability (CTBA) — a group that is never without a plan to take more money from hard-working Illinois families and hand it over to the government.

In Crain’s Chicago Business, liberal reporter Greg Hinz writes that CTBA has found a progressive income tax proposal that would “boost state income $2 billion a year while reducing taxes for 98 percent of individual filers, anyone with an adjusted gross income of less than $300,000 a year.” And if you believe that one, I’ve got a bridge to sell you.

Last year conservatives warned their fellow Illinoisans that the income tax increase that became law would not be the last tax increase. A progressive income tax wouldn’t be the last either — it would just be the next. When 25 percent of your state’s budget continues to fund retired government employees, while those pension funds are mathematically insolvent, it is foolish to think otherwise. And pension fund “debt” isn’t the only debt the state has amassed.

Wait, there’s more! There will be tax cuts under CTBA’s proposal. And their miracle plan asserts that “raising rates will not induce many higher-income individuals to move out of state”!

Campaigning in 2014, Bruce Rauner was vague about his claim that he could balance the state budget. Wisely, J.B. Pritzker is playing the same game in 2018. Though time will tell if Pritzker foolishly claims, as the CTBA does, that “98 percent of taxpayers would get at least some cut,” while “Those earning more than $300,000 a year would pay more, with rates rising to up to 9.85 percent for those with taxable income of more than $1 million year.”

Tax the rich! Too bad that never works out.

Mark Glennon, the founder and executive editor of Wirepoints, answers the CTBA:

CTBA’s New Progressive Tax Proposal Makes Our Case Against it

We’ve written here often that Illinois can’t count on a progressive income tax to solve much, if anything, in its fiscal crisis. That’s why many proponents, including gubernatorial candidate J.B. Pritzker, won’t get specific about what they spin as the primary solution to our problems, which we wrote about recently here and in Crain’s.

Well, the union-friendly Center for Tax and Budget Accountability just made the case for us.

They released a specific proposal and concluded it would raise just $2 billion in additional revenue. What that really does is prove the futility of thinking tax increases are a way out of our mess.

For some perspective on why $2 billion wouldn’t go far, consider just the additional funding required to meet “adequacy” under the new school funding formula. That alone will consume that $2 billion within six years.

Two billion dollars wouldn’t even cover the shortfall in unpaid interest that effectively accrues on pensions, much less begin to reduce their unfunded liability.

What about the rest of the deficit we’ve been running, which has averaged $11.7 billion over the last ten years, according to the state’s own financial statements?

How about something from the state to relieve suicidal property taxes so many municipalities are levying? Forget it.

And what about gubernatorial candidate J.B Pritzker’s list of promised goodies that so many progressives want?

“I think we all know what’s going on here,” Glennon writes:

Hurray, a tax cut for 98% of us so let’s get that constitutional amendment needed for this progressive tax proposal.” That’s what the CTBA and other proponents are hoping will be the response. After that, it will be, “Oops, wasn’t quite enough of a tax increase so….”

The entire article is worth your time — it can be found here.

In an article, Cole Lauterbach and Greg Bishop answer the question “Do Illinoisans support a progressive tax?” “It depends upon who you ask, they explain:

Jim Long, director of legislative relations for the Chicago-based think tank (the Illinois Policy Institute), said nearly everyone would support a progressive tax without the reality of math.

“It’s like asking a kid if they want ice cream for dinner. Everybody’s going to go for that,” he said. “We put [our poll] through the grinder of economics.”

All but one House Republican signed on to House Resolution 975 opposing a progressive tax ballot question, effectively killing the measure for this session. Rep. Jerry Costello became the first Democrat to sign on to a resolution opposing a graduated income tax when he was added as a chief co-sponsor to Rep. David McSweeney‘s similar House Resolution 891.

As always, readers must decide who to believe. Those defending and promoting excessive always-increasing taxes and government spending, or those calling for less of both.

For more on the topic, here are three recent articles of interest:

Fifty lawmakers are taking a pledge to fight a progressive income tax in Illinois, denying progressive tax proponents the support needed to put a constitutional amendment on the ballot.

Illinoisans can’t afford another middle-class tax hike. But that’s exactly what proponents of a progressive income tax were seeking this legislative session.

Here is a news item about the first Democrat to publicly oppose a progressive tax hike:

Calls to protect Illinoisans from a progressive income tax are now coming from both sides of the aisle in Springfield.

State Rep. Jerry Costello, D-Smithton, signed on as chief co-sponsor to House Resolution 891 on April 27. The resolution was filed in March by state Rep. David McSweeney, R-Barrington Hills, and states that Illinois should not scrap its constitutionally protected flat income tax.

Given Illinois’ reckless spending habits, a graduated, or “progressive” income tax is the last thing the state needs. While sold as a tax on the rich, a progressive income tax could have disastrous consequences for middle-class Illinoisans while failing to address the state’s misplaced spending priorities.

The Painful Push for a Progressive Tax in Illinois

Instead of pushing for further tax hikes on tapped-out taxpayers, lawmakers should rally behind a bipartisan effort to limit state spending.

The push for scrapping Illinois’ constitutionally protected flat income tax is greater than ever, with Democratic gubernatorial nominee J.B. Pritzker making it a key pillar of his campaign.

A progressive income tax is one of the most foolish policy choices Illinois could enact at a time when residents are experiencing crushing tax burdens, sluggish economic growth and high levels of outmigration.

Take ACTION: Please click HERE to send a message to your state senator and state representative.  Springfield hasn’t earned a right to additional tax resources. They have been utterly reckless with what they already get… more revenue simply will not improve their imprudence. Ask them to vote against any legislative proposal that would increase tax burdens for Illinois citizens. Ask them not to take much needed resources away from responsible family budgets to boost imprudent spending of Illinois government.

Let them know that you oppose any new tax increases when they refuse to cut government waste and bloat. You can also call your lawmakers’ Springfield offices through the Capitol Switchboard at (217) 782-2000.