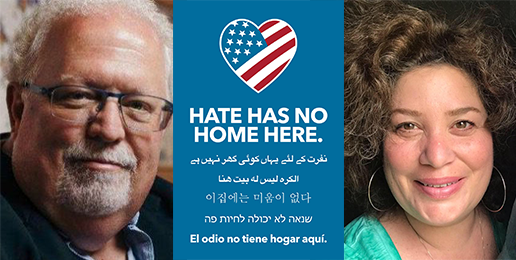 Something unexpected happened following the posting on Illinois Family Institute’s Facebook page of my article on the divisive “HATE HAS NO HOME HERE” yard signs. Well, actually two unexpected and related things happened. One of the things is the Chicago Tribune’s restaurant critic Phil Vettel left a response. Here’s his piquant comment about my article:

I replied, “Such an inarticulate (perhaps even hateful) response from a Chicago Tribune writer. Surprise, surprise.”

Another commenter joined the conversation saying, “So prove her wrong, Phil! Bet you can’t.”

Vettel kinda, sorta took her up on the challenge with this:

Imagine the level of inarticulate hate (h/t Laurie Higgins) one must have to take issue with “Hate Has No Home Here.”

I’m not sure in what specific or even general ways my article was “inarticulate,” unless Vettel has redefined “inarticulate” in the same way “progressives” have redefined “hate” to mean the expression of ideas with which they disagree. Nor do I know what I said that would constitute “hate.” Maybe he meant that I hate the yard signs because of what they connote, in which case he’s still off the mark. I don’t “hate,” (i.e., detest) the yard signs. I object to them. I don’t like them. I think they’re divisive and counterproductive. I think they foment hatred under the guise of hippie dippy, kumbaya sloganeering.

This brings me to the other interesting thing that happened yesterday. The press contact person for the “HATE HAS NO HOME HERE” project, a very nice woman named Carmen Rodriguez, called to discuss my article. She began by insisting that I provide the evidence for my claim that the yard signs have anything to do with Trump, Trump-supporters, or conservative beliefs on immigration or the “LGBTQ” ideology. I pointed to the evidence I provided in my article, which is a piece that clearly links the signs to the election of Trump and the false allegation of bisexual North Park University student Taylor Volk that she received hateful “anti-gay” messages from a Trump supporter. While acknowledging that the article I cited did, indeed, make the link, she said that that article was in error. I asked if she had called the reporter who wrote the original piece to correct her to which Rodriguez responded with silence.

In an attempt to prove that the yard signs had nothing to do with Volk’s allegations, Trump, Trump supporters, or conservative beliefs, Rodriguez pointed to prior neighborhood campaigns, specifically mentioning a “ribbons for peace” initiative. When asked what prompted this campaign, Rodriguez faltered saying she couldn’t exactly recall, but it had something to do with someone in the neighborhood hearing some “nationalistic” talk. Hmmm, if I’m not mistaken that’s the kind of thing you hear from “progressives” who deem expressions of love for America as hateful “nationalistic” rhetoric.

Rodriguez even tried to convince me that she’s not really “progressive,” but her Facebook photos from a January 2017 march seem to tell a different story. One says, “DONALD, YOU IGNORANT SLUT.” Another says, “HOW MANY WOMEN DOES IT TAKE TO CRUSH A CHEETO?” Another, “MY CHOICE.” And another, “FEMINISM is the RADICAL NOTION that WOMEN are PEOPLE #notmypresident.” Hmmm. My astute powers of deduction lead me to believe she may be a dyed-in-the-wool “progressive.”

Once more for the dull of reading.

All decent people oppose hatred—and yes, conservatives are decent people. “HATE HAS NO HOME HERE” is a trite slogan stating the obvious. So, why make the yard signs and why litter one’s lawn with them? Clearly, something prompted the creation and dissemination of the signs.

The answer can be found not only in the eager gullibility of those who bought Taylor Volk’s hoax—which was the proximate cause of the signs—but also in the relentless epithet-hurling of “progressives” over the past 30 years or so. Whenever someone expresses an ontological or moral proposition or political view with which “progressives” disagree, they—“progressives”—shriek “hater.” It doesn’t matter to “progressives” whether the person expressing the forbidden view actually hates people. All that matters to “progressives” is silencing conservatives through invective.

The consequence is that the words “hate” and “hater” now have denotations and connotations. And everyone knows the connotations. Conservatives well understand that when the word “hate” appears, it’s likely directed at them. And that’s why these yard signs are divisive. If the creators intended for these signs to eradicate hatred, they should not have employed politicized language imbued with associations “progressives” have created.

Hate Hoaxes Have a Home Here
b
a
x
r