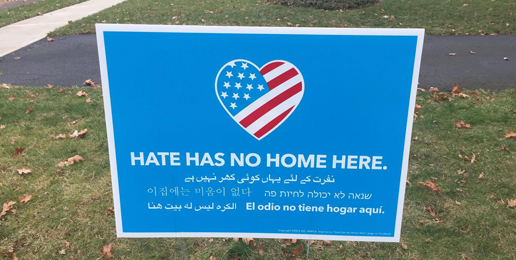 It was announced a week ago that the bizarre hate crime of which actor Jussie Smollett alleges he was a victim and the subsequent clean-up of his mess by incompetent fixer State’s Attorney Kim Foxx is going to be investigated by a special prosecutor. This turn of events reminded me of yard signs. On your leisurely summer walks, have you seen those yard signs that cropped up all over Illinois and other states over the past three years—you know, the ones with the banal expression “HATE HAS NO HOME HERE”? Who could disagree with such a statement, and, therefore, why a yard sign? Well, there’s text and then there’s subtext and history. The text expresses an important idea commonly held. So, why make a yard sign to announce a commonplace verity to every passerby every day for three years? Ah, now we come to the subtext, but first the fascinating history that the mainstream press did a very poor job illuminating.

On November 15, 2016, exactly one week after the election of President Donald Trump, NBC News Chicago reported that bisexual student Taylor Volk, then a senior at the purportedly Christian North Park University, said she had received two anonymous emails and a note taped to her door that contained “homophobic slurs,” “harassing, threatening language” and references to Trump. Volk further claimed that such occurrences were a “nationwide epidemic.”

But then things took an unexpected turn, though why it was unexpected is surprising.

A week after Volk’s story made the news, an investigation revealed her entire story was—wait for it—a hoax. But “progressives” can’t let either a crisis or a hoax go to waste. Gotta mine even hoaxes for propaganda gold. So, with very little press on the hoax, the gang of seven were able to disseminate their banal, virtue-signaling yard signs around the country and even the world, although oddly the website doesn’t mention the hoax in the group’s background myth.

Now for the subtext or subtexts. While the text suggests that community members reject hatred—which most community members in most communities do—the subtext coming on the heels of Volk’s Hoax is that Trump is a hater, that those who voted for him (you know, the “deplorables”) are haters, and that those who disagree with the arguable assumptions of  “progressives” on immigration or the “LGBTQ” ideology are haters.

These yard signs are the neighborhood equivalent of “safe space” stickers that regressive public school teachers/activists affix to their desks and regressive corporate employees affix to their desks and cubicle dividers. These yard signs and stickers are cunning strategic devices. First, they are political announcements masquerading as noble humanitarian gestures. Second, their absence implies that community members, teachers, or corporate employees with naked yards, desks, cubicles, or offices are insufficiently “woke,” unsafe, intolerant, bigoted haters. And so, “progressive” mission accomplished.

The next time a “progressive” starts caterwauling that conservatives are divisive, remember what “progressives” do. They actually threaten and attack conservatives. They continually spread the poisonous lie to immigrants and members of the “LGBTQ” community—including children and teens—that those who hold conservative moral and political beliefs hate them. And they concoct hateful, divisive hoaxes to foment more “progressive” hatred.

Here’s a list of hoaxes alleging anti-“gay” and/or racist incidents. I’m sure government schoolteachers will be covering these in their unit on political hoaxes. Taylor Volk was right. There is an epidemic—an epidemic of Leftist hoaxes designed to spread hatred of conservatives:

Student Charged with Making Anti-Gay Threats against Herself (National Review)

‘I don’t want to die!’: Leading gay ‘marriage’ activist in Ohio faked his own abduction (LifeSiteNews)

Why Would A Gay Teenager Commit Hate Crimes Against Herself? (BuzzFeed)