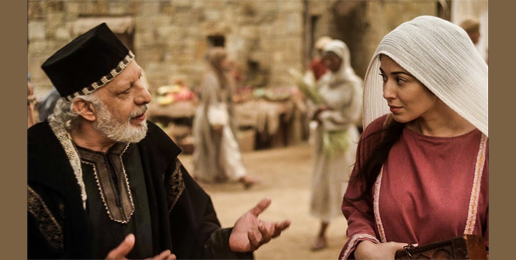 It took quick thinking on the part of “Jesus” to keep the action going.

The makers of “The Chosen” were filming a scene about the wedding in Cana. The critically acclaimed series about the life of Christ was in the midst of an all-night shoot in Weatherford, Texas, near Dallas. Everyone was tired, especially the young ones.

“They only had our children and one other family,” said Neal Harmon, CEO of VidAngel Studios, which distributes “The Chosen.”

“We tried to acclimate the kids to stay up all night, with moderate success.  We have a daughter who’s 5 and she’s the one who looks most Israeli. But by one or two in the morning, she was done. She started complaining to her mom, and said, ‘we have to go home.’ Then the casting director said it was time for the scene with Jesus and the young children.” The girl refused to budge.

“Jonathan [Roumie], who plays Jesus, came over and started joking with her, and without her knowing it, he got her to follow him to the table, where they began playing a game. The cameras were rolling. And they got it.

“You know, if Jesus Himself had been on the set, I believe He would have handled it like that.”

The scene is in Episode Five of “The Chosen,” which is making history as the most successful crowd-funded series of all time, viewed more than 60 million times worldwide. They are already planning six more seasons.

VidAngel, which distributes “The Chosen,” raised more than $10 million to produce Season One, and, by the end of September, had generated about $9 million to go toward Season Two, according to Mr. Harmon.

Debuting in November 2019, following a pilot in 2017, “The Chosen’s” first season had eight episodes, which can be screened at the series’ website and by downloading “The Chosen” app on Apple or Android.

Created by evangelical Christian filmmaker Dallas Jenkins, son of “Left Behind” co-author Jerry Jenkins, “The Chosen” has gripping stories and superb acting.  At the 2020 Christian Film & Television Commission’s MOVIEGUIDE awards, “The Chosen” finished in the top three in television for the Epiphany Prize.  Mr. Roumie won the television Grace Award for his portrayal of Jesus in “The Chosen: Episode 8: I Am He.”

Mr. Jenkins, 45, is an independent filmmaker who broke into the field 20 years ago with “Hometown Legend.” He has directed and produced more than a dozen feature and short films for Universal, Lionsgate, Pure Flix, Hallmark Channel and Amazon.

It’s a minor miracle that “The Chosen’s” first episodes, shot in Texas, so closely resemble the Holy Land.

The second season may look even more authentic. Shooting began in early October near Provo, Utah, on a Jerusalem set built and owned by The Church of Jesus Christ of Latter-Day Saints.  Mr. Harmon, who is a member of the church, and works with Catholics, Protestants and Messianic Jews on the project, said that people who have been to the real Holy Land “feel like they’re in Israel when they’re on the set.”

Launched in 2013, VidAngel took over a niche that other companies such as Clean Flicks and Clean Films had filled – offering families “cleaned up” versions of Hollywood productions. That is, until Hollywood lawsuits in 2006 drove them out of business.

VidAngel gave viewers the ability to skip and mute scenes in movies and TV shows available for streaming.  As before, Hollywood was not amused, even though it helped them reach a huge, underserved audience. Disney, LucasFilm, 20th Century Fox, Warner Bros., Turner Entertainment, New Line Productions and MVL Film Finance sued VidAngel in 2016.

A federal judge in Los Angeles awarded the studios $62.4 million for copyright violation. VidAngel settled in September, agreeing not to “decrypt, copy, stream or distribute content of Disney, Warner Brothers, and their affiliates without permission from the Studios,” drop an appeal and pay as much as $9.9 million over 14 years.

It was actually the best thing to happen to the upstart company, said Mr. Harmon.  “We’ve had to build a system outside the system,” he told me during a telephone interview.  “It’s a beachhead for transforming entertainment for the rest of us.”

VidAngel also produces “Dry Bar Comedy,” which allows people to “vote” for their favorite comedians according to audience share and what they skip.  If the comedians stay family friendly, they get bonuses. Begun in 2017 in an old bar in Provo, Utah, that Neal and his brother Jeff Harmon leased, the series has registered more than 2 billion views, Neal said.

This past week, the company unveiled a pilot for “The Tuttle Twins,” based on books by Connor Boyack that teach kids about personal responsibility, free markets, and government.

The clean entertainment genre is rapidly expanding. Food and home improvement channels are spiking. MeTV offers classic old TV shows. UP TV and Hallmark steadily produce quality G-rated fare, although Hallmark’s insertion of “gay” themes this year may test the loyalty of its non-PC audience.  Pure Flix, founded in 2005, produces Christian-themed movies like “God’s Not Dead,” “Woodlawn,” and “Unplanned,” and has a well-stocked streaming service.

As for VidAngel, “We’re finished trying to make money for the very few Hollywood studios like Disney who abhor that we’re skipping objectionable parts of their shows and sue us for it,” Mr. Harmon said. “If they’re not willing to cooperate, we have no choice but to replace them.”

It couldn’t happen to a nicer bunch.