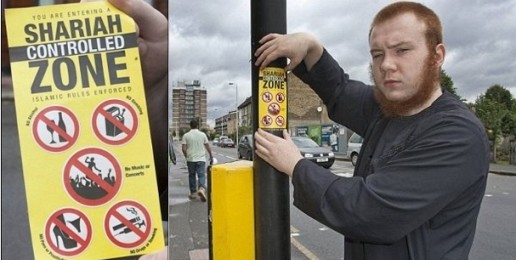 The Leftist media and Islamic supremacist groups have been doing a victory dance ever since Saturday night, when Fox News issued an apology for statements made on the air by terror expert Steve Emerson and others about Muslim no-go zones in Britain and France. However, the apology doesn’t say what it has widely reported as saying – and there is considerable evidence that Muslim areas in both countries are a growing law enforcement and societal problem.

Over the course of this last week we have made some regrettable errors on air regarding the Muslim population in Europe, particularly with regard to England and France. Now, this applies especially to discussions of so-called ‘no-go zones,’ areas where non-Muslims allegedly aren’t allowed in and police supposedly won’t go.

To be clear, there is no formal designation of these zones in either country and no credible information to support the assertion there are specific areas in these countries that exclude individuals based solely on their religion.

There are certainly areas of high crime in Europe as there are in the United States and other countries — where police and visitors enter with caution. We deeply regret the errors and apologize to any and all who may have taken offense, including the people of France and England.

The Atlanta Journal-Constitution’s joyous headline read: “Fox News admits ‘no-go zones’ are fantasy.” The far-Left Crooks and Liars blog exulted: “Fox Pundits Finally ‘Apologize’ After A Week Of Being Mocked For ‘No Go Zones’ Claim.” More restrained but still unmistakably gleeful was the New York Times: “Fox News Apologizes for False Claims of Muslim-Only Areas in England and France.” The Leftist media has seized on Fox’s apology to declare that there are aren’t any no-go zones in France or Britain – and by extension that there is no problem with Muslim populations in Europe. NewHounds’s summation was typical: “Fox News has become the laughingstock of Europe this week as first England and then France lampooned its ignorant, Islamophobic reporting.”

The only problem with all the cork popping around Fox’s apology was that there is a problem with Muslim areas in Europe – and the Fox apology didn’t go so far as to say there wasn’t. To be sure, the controversy began with undeniably inaccurate statements from Emerson. He said on Fox on January 11 that “there are actual cities like Birmingham that are totally Muslim, where non-Muslims just simply don’t go in.” That is false, and Emerson has acknowledged that and apologized.

However, Emerson was not guilty of fabrication, just of overstatement. Some of the comments on a piece in the UK’s Daily Mail about his gaffe and British Prime Minister David Cameron’s reaction to it (he called Emerson a “complete idiot”) insisted that Emerson was at least partially right: “Just shows cameron doesn’t even know what is happening in this country , as the news presenter is totally correct , its a no go zone .” “There ARE some parts of Birmingham where you darent or shouldn’t go !” “Is he far off the truth? Maybe it’s not true for Birmingham as a whole but there are certain areas where it is true. Certainly it is true of certain other Towns in the UK. Bradford, Leicester, Luton spring to mind.”

“To be clear, there is no formal designation of these zones in either country and no credible information to support the assertion there are specific areas in these countries that exclude individuals based solely on their religion.”

That says as much as it says, and no more. It says that neither the British nor the French government has designated any areas to be no-go zones where non-Muslims aren’t allowed in, and that there is no evidence that non-Muslims are not allowed into any areas in either country.

But this carefully worded statement does not actually say that there aren’t areas in Britain or France in which non-Muslims are menaced for not adhering to Islamic law. That is a real and abundantly documented problem. Emerson pointed to it when he said:

“In parts of London, there are actually Muslim religious police that actually beat and actually wound, seriously, anyone who doesn’t dress according to Muslim, religious Muslim attire.”

While Emerson’s implication that this was an ongoing phenomenon was false, there were indeed such Sharia enforcers in London between 2011 and 2013. In July 2011, the UK’s Daily Mail reported:

“Islamic extremists have launched a poster campaign across the UK proclaiming areas where Sharia law enforcement zones have been set up. Communities have been bombarded with the posters, which read: ‘You are entering a Sharia-controlled zone – Islamic rules enforced.’”

In December 2013, members of one of these self-styled “Muslim patrols” were imprisoned; according to the Guardian, in London they

“harassed people, berating them with shouts of ‘this is a Muslim area!’ They forced men to dump their alcoholic drinks, instructed women on the appropriate way to dress, and yelled insults at those they perceived to be gay.”

They didn’t just berate people; as Emerson said, they beat them. In YouTube videos, they threatened to do so, saying: “We are coming to implement Islam upon your own necks.” In June 2013, Muslims attacked an American who was drinking on the street, grabbing the bottle out of his hands and smashing him in the eye with it, causing permanent injury. In August 2013, according to the Daily Mail, “two brothers in law who went on a sponsored walk wearing comedy mankinis had to be picked up by police – after they were pelted with stones and eggs by residents who told them ‘this is a Muslim area’ and demanded they leave.”

A “Muslim area” – maybe even a “no-go zone.” Not in the sense that non-Muslims are barred from entering, but in that, if they do enter, they have to adhere to Sharia restrictions.

The Fox apology is all the more curious in light of the fact that others, even on the Left, have noticed the no-go zones in France before some Fox commentators began talking about them in the wake of the Charlie Hebdo attacks. David Ignatius wrote in the New York Times in April 2002:

Newsweek, hardly a conservative organ, reported in November 2005 that

“according to research conducted by the government’s domestic intelligence network, the Renseignements Generaux, French police would not venture without major reinforcements into some 150 ‘no-go zones’ around the country–and that was before the recent wave of riots began on Oct. 27.”

The police wouldn’t venture into these areas without major reinforcements in 2005. Does anyone really think that the situation has improved in the intervening years?

And the day after the Charlie Hebdo massacre set off Fox’s discussions of no-go zones in France, the reliably Leftist New Republic wrote:

So something the New York Times noted in 2002 and Newsweek in 2005, and that the New Republic reported was still a problem in January 2015, is now something that Fox News has to apologize for discussing?

Clearly there is a problem in these areas. Two of the three Charlie Hebdo murderers were born and raised in France. Where did they get their ideas about killing blasphemers? Not from French schools. They learned them in the Muslim areas where they were born and raised. What’s more, France leads the West in the number of Muslims who have traveled from there to wage jihad for the Islamic State, with well over a thousand Muslims leaving France to join the caliphate. Where did they get their understanding of Islam?

In objecting to Fox’s coverage, the French government objected to claims that these areas were outside their control and subject to Sharia, but it is obvious that whatever control they do have over these areas is not enough to prevent the indoctrination of all too many young Muslims into the jihad ideology.

There needs to be a balanced, honest public discussion of these Muslim areas in Britain and France. The controversy over what has been said on Fox in recent weeks only obscures the need for that discussion. And Fox’s apology, however carefully worded, only plays into the hands of Leftists and Islamic supremacists who have a vested interest in rendering people ignorant and complacent about the reality of what is going on in these areas.

So now would be a good time for Fox to apologize for its apology – and to devote extended attention to the Muslim areas of Britain and France, and shed light on what is really going on in them. That would be to provide a service far greater than the usual surface-scratching of television news.

This article was originally posted at the Front Page Magazine website.