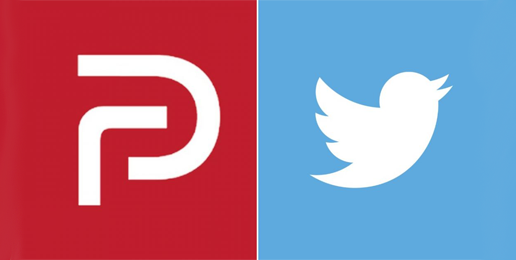 Back in 2008, with a little encouragement from friend, Constitutional law professor and radio talk show host, Hugh Hewitt, I signed on to Twitter and was know as an early adapter.

Twitter was a new social media tool whereby like-minded conservatives could share content, message, and cheer each other on. The Right was swimming upstream and almost all broadcast media and other societal gatekeepers had lurched radically to the left, leaving conservatives adrift and feeling alone in an ever-darkenting culture.

And now the Twitterverse is closely guarded by its Leftist CEOs and social media techinitions, censoring conservatives and any who object to their godless worldview.

Which is why we’re seeing a mass exodus from Twitter to the newer, freer Parler.

What in the wide, wide world is Parler?

Parler is the French verb, “to speak” and the French pronunciation (par LAY) was the initial pronunciation, but since has changed to the English “parler,” (PAR ler) as in “a place to sit and visit.”

Parler was founded in 2018 and based in Henderson, Nevada. After being exhausted with a lack of transparency in big tech, ideological suppression and privacy abuse, our co-founders, John Matze and Jared Thomson decided to create an alternative solution.

Of note…while Twitter, Facebook and YouTube mention “Community Guidelines,” those mysterious guidelines are nowhere the average Joe can find them and they seem to be entirely subjective, bending and moving to suit the social media entity’s progressive policing staff.

Parler, on the other hand, has easy to find Community Guidelines which appear to be quite reasonable: no spam, no terrorism, no unsolicited advertisements, no pornography, no obscenity, plagiarism, sex trafficking, etc. Every listed constraint falls in line with a decent citizen’s mindset, a Christian or faith worldview.

And on Fox Business last month a short report aired of prominent Conservatives who have made the move to Parler (including Devin Nunes, Ted Cruz, President Donald J. Trump, Dan Bongino, etc.):

Even the Washington Examiner featured an article on June 24, chronicling the Conservative migration wave to Parler, “Conservatives fed up with ‘censorship’ on Twitter jump to Parler“:

Conservative commentators, politicians, and others are shifting to a social media platform that competes with Twitter.

A slew of Twitter users looking for a social media platform they believe won’t censor them, including Rep. Devin Nunes, commentator Jesse Kelly, former Navy SEAL Robert O’Neill, and others, announced they have established accounts on Parler.

Nunes told the Federalist’s co-founder Sean Davis that “Parler will set you free!”

I made the move to Parler a couple years ago, when my friend, Elizabeth Johnston (“The Activist Mommy“) recommended the new social media platform.

As Christians, we are called to:

Do everything without grumbling or arguing, so that you may become blameless and pure, “children of God without fault in a warped and crooked generation.” Then you will shine among them like stars in the sky. (Phil. 2:14&15)

And we are admonished in the Gospels:

You are the salt of the earth. But if the salt loses its saltiness, how can it be made salty again? It is no longer good for anything, except to be thrown out and trampled underfoot. (Matt. 5:13)

And in the epistle of Peter:

But sanctify the Lord God in your hearts: and be ready always to give an answer to every man that asketh you a reason of the hope that is in you with meekness and fear. (1 Peter 3:15)

Those verses are our marching orders from Jesus: we Believers are to shine like stars (reflecting the light of The Son!), be “salt” (both preserving from decay and adding savor) in our culture, and be perpetually ready to tell a lost world about the great and mighty hope we have!

Such a mission is not for cowards, but brave and courageous souls. The meekness we’re instructed to temper our words is “power under control,” not mealy-mouthed reticence.

We should be joyful warriors, battling as outlined in Ephesians:

For we wrestle not against flesh and blood, but against principalities, against powers, against the rulers of the darkness of this world, against spiritual wickedness in high places.

Wherefore take unto you the whole armour of God, that ye may be able to withstand in the evil day, and having done all, to stand.

Stand therefore, having your loins girt about with truth, and having on the breastplate of righteousness;

And your feet shod with the preparation of the gospel of peace;

Above all, taking the shield of faith, wherewith ye shall be able to quench all the fiery darts of the wicked.

Unfortunately, too many of the big tech companies are wholly owned and operated by progressives more concerned with leftist indoctrination than providing a free speech forum.

For now, Parler seems to provide such a forum with only minimum and reasonable constraints.

I say make the move! Sign up at Parler and join those of us who choose speak words of truth and life to our dark, dark culture.

These may or may not be the last days, but we know we’re to be busy no matter what sharing the Good News and telling the truth to hungry hearts in a dark, dark world.

For now, Parler may just be a great tool to further that important and eternal mission!