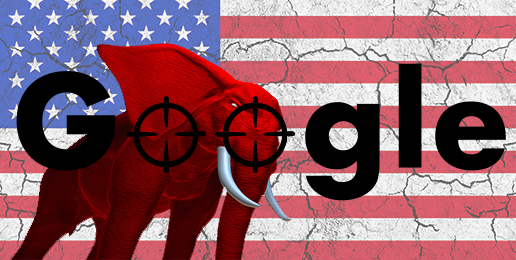 Everyone who’s conscious knows that Google, Facebook, YouTube, and Twitter are in the tank for “progressivism”—also known as “Cultural Regressivism that Undermines Decency” (CRUD). While the hive at Google manipulates its algorithms to hide information that regressives don’t like, Twitter, YouTube, and Facebook Overlords censor with the kind of tyrannical oppression that in the good old days liberals and radicals feared and loathed. Now that liberals and radicals control the levers of power, they have abandoned all previous philosophical commitments to freedom and liberty. A new explosive undercover video by Project Veritas exposes the extraordinary and deceitful machinations of Google to manipulate access to information in order that regressivism can gain and maintain yet more power. In other words, Google—like its fascistic government precursors—exploits its monopolistic power to propagandize, thereby securing its iron grip on power. Resistance is almost futile.

With his face and voice concealed, a Google insider warns about the implications of the confluence of Google’s power, reach, and bias:

What’s scary is that Google’s deciding what’s important and what’s not important. They are… effectively deleting conversations from the national narrative. It reminds me of… a book called 1984. That should have been a warning…. Google’s… deciding what gets read, what gets consumed, what people are able to click on, what appears. It reminds me a lot of fascism…. When videos get pulled off of a platform, that’s… a form of censorship…. People have no idea that it’s happening. They still think that Google’s an objective source of information and it’s not.

Secretly recorded conversations with Google executive Jen Gennai reinforces the claims of the Google insider, further revealing Google’s Leftist bias, arrogance, and determined efforts to use its power to influence the next presidential election:

The reason we launched our [Artificial Intelligence] principles is because people were not …. saying what is fair and what’s equitable, so we’re like, “Well, we are a big company. We’re going to say it.”… [M]y definition of fairness and bias specifically talks about historically marginalized communities, and that’s who I care about. Communities who are in power, and have traditionally been in power, are not who I’m solving fairness for. Our definition of fairness is one of those things that we thought would be like obvious, and everybody would agree to, and it wasn’t…. [T]he same people who voted for the current President did not agree with our definition of fairness.

“Historically marginalized communities” refers to identity-peddlers’ four favorite categories of humans:  blacks, women, homosexuals, and cross-sex “passers.” Leftists like Gennoogle have been forced to add “historically” to marginalized, since these groups have pushed from the margins to the center which will not hold.

Clearly Gennoogle has no interest in genuine fairness. “Fairness,” like hatred, inclusivity, safety, tolerance, and equality, means exactly what the googley Humpty Dumptys choose it to mean. Who cares if theologically orthodox Christians or political conservatives are treated unfairly. That’s their problem to solve, dagnabbit!

Gennai reveals the supreme arrogance of Google, which presumes to make “things more fair” by supplanting the will of the people as expressed through the duly elected executive and legislative branches of the government with Gennoogle’s reconceptualization of “fairness”:

The White House and Congress won’t play a role in making things more fair, so people are holding us accountable to fill the gap of what should be done.

Gennai makes clear the presumptive supremacy of the Google hive mind over the elected representatives of the people:

Gennai adds more flesh to the bones hinted at in her allusion to Trump, his supporters, and “fairness”:

Elizabeth Warren is saying that we should break up Google…. [S]he’s very misguided. That will not make it better, it will make it worse because now all these smaller companies who don’t have the same resources that we do will be charged with preventing the next Trump situation…. a small company cannot do that.

We all got screwed over in 2016…. so now we’ve rapidly been like, “What happened there? How do we prevent it from happening again?”

Evidently in panic mode after the exposé was released, Gennai penned a futile effort to recast her damning words and malign Project Veritas:

[T]hese people lied about their true identities, filmed me without my consent, selectively edited and spliced the video to distort my words and the actions of my employer, and published it widely online.

While Google engages in unconscionable, secretive efforts to manipulate public opinion and to silence conservative employees through fear of loss of employment, she’s outraged about being secretly recorded?

Surely a smart human like Gennai knows that all documentaries and exposés “selectively” edit. The ethical issue is not whether an exposé is selectively edited. The ethical issue is whether it was edited in such a way as to distort someone’s words. Gennai tries to prove that Project Veritas distorted her words about the 2016 election, saying she never suggested Google objected to Trump’s election per se but rather to “foreign interference”:

In a casual restaurant setting, I was explaining how Google’s Trust and Safety team (a team I used to work on) is working to help prevent the types of online foreign interference that happened in 2016.

Project Veritas asked the Google insider about the meaning of this statement from an internal Google document:

In some cases, it may be appropriate to take no action if the system accurately affects current reality. While in other cases, it may be desirable to consider how we might help society reach a more fair and equitable state via product intervention.”

The Google insider translated into plain English what “helping society” looks like in the Google hive:

This exposé will come as no surprise to former Google employee Mike Wacker, recently fired for publicly criticizing Google’s “outrage mobs and witch hunts.” Wacker shared that the Google outrage mobs (OMs) demanded Google have nothing to do with the conservative Heritage Foundation, calling its president Kay Cole James the Grand Wizard of the KKK. For those who don’t know, Kay Cole James is black and endured egregious racist attacks when growing up.

You may wonder exactly how the OMs could justify calling a black woman the Grand Wizard of the KKK. Well, this particular OM has concluded, apparently with no scientific proof, that masquerading as the opposite sex is analogous to race, and, therefore, opposing things like co-ed restrooms and locker rooms—which the Heritage Foundation does—is analogous to racism.

Wacker revealed that one Google employee was reported to Human Resources (HR) for sharing a National Review article, and another was reported for appearing “to be promoting and defending Jordan Peterson’s comments about transgender pronouns,” which allegedly made some Google employee “feel unsafe at work.” #eyeroll

What other subjective, often-changeable feelings will Google OMs conclude are analogous to race? Will those employees who disagree with the hive’s assumptions about those other feelings be safe in that “nonpartisan,” inclusive space to express their views? And what if the OMs are wrong? What if cross-sex identification, cross-sex hormone-doping, surgical mutilation, and co-ed private spaces are, in reality, neither good nor right?

While Wacker lost his job, Blake Lemoine retains his job as senior software engineer at Google. The name Blake Lemoine may sound familiar. He made the news in 2018 for calling Tennessee Congresswoman Marsha Blackburn a terrorist for writing an op-ed critical of the obvious bias against conservatives and Republicans within tech companies like Google and Facebook.

If you think that trans women aren’t women then you can either keep it to yourself or GTFO [Get the f**k out]. Google’s corporate policies are crystal clear on that.

While Google employees are free to say that “transwomen”—who are objectively, immutably, scientifically verifiably men—are women, others are not permitted to say “transwomen” are men. Deviate from the deviant narrative and off with your head!

Trouble seems to follow Lemoine—who identifies variously as a pagan priest and Gnostic Christian—wherever he goes. The “bisexual” Lemoine who is in a “non-monogamous” relationship with his wife enlisted in the U.S. Army in 2003 and then in 2004 “realized he did not like working with U.S. Army troops.” When the Army refused to allow him “to quit the Army,” he went on a work strike and then a hunger strike. He was court-martialed and discharged for bad conduct.

Before whistle-blower Mike Wacker, there was former Google engineer James Damore who was fired in 2017 after he wrote and distributed a measured internal memo replete with evidence in which he criticized Google for, among other things, being “an ideological echo chamber.” Can’t have any Google employee pointing out that the emperor brooks no dissent. Off with his head!

IFI Fall Banquet with Franklin Graham!
We are excited to announce that at this year’s IFI banquet, our keynote speaker will be none other than Rev. Franklin Graham, President & CEO of the Billy Graham Evangelistic Association and Christian evangelist & missionary. This year’s event will be at the Tinley Park Convention Center on Nov. 1st.