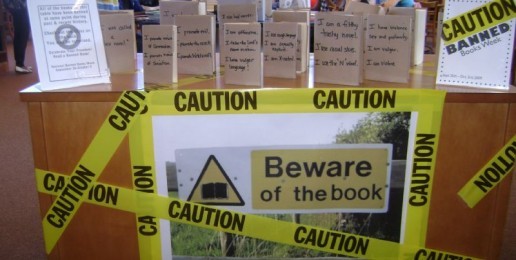 His personal story was revelatory. Keilman shared that when he was young, pulp novels with “absolutely no redeeming value” beckoned with an irresistible force. He describes what so powerfully attracted him: their “lurid” titles and the cover art which depicted the hero with “his arm around a busty woman, blasting a hole through some underworld stooge.”

But then after explicitly stating the sexual and violent language and imagery that served as “catnip to a preteen” boy, he almost-deftly switches his argument.

After describing the features that actually appealed to him, he then spends the rest of the article suggesting that what motivated him to sneakily read these novels was parental disapproval. From that strained but common argument he posits, perhaps disingenuously, that since kids are attracted to books that parents prohibit, if we just prohibit good books, kids will be attracted to them. Yes, Keilman believes that all parents need do is furrow their censorious brows at Moby Dick and before they know it, little Betty will be hidden under her covers with a flashlight reading about Ahab’s battle with the great fish.

Here are some of the issues surrounding “Banned Books Week” that Keilman ignored:

Here’s an interesting exercise for Mr. Keilman and anyone who cares about both intellectual diversity and how their taxes are spent: Search your local high school’s or community’s library catalogue from the comfort of your home using the search terms “sexual orientation,” “lesbian,” “gay,” and “homosexuality.” Count up how many resources espouse liberal assumptions about the nature and morality of homosexuality (scores and scores) versus how many affirm conservative assumptions (close to nil).

Then try to get your library to fill the gaping hole in its book collection by ordering some of these:

If your library refuses to order any of these books citing Collection Development Policies as their reason, remind them of these words from the former head of the ALA’s Office of Intellectual Freedom, Judith Krug:

We have to serve the information needs of all the community and for so long “the community” that we served was the visible community…. And so, if we didn’t see those people, then we didn’t have to include them in our service arena. The truth is, we do have to.

We never served the gay community. Now, we didn’t serve the gay community because there weren’t materials to serve them. You can’t buy materials if they’re not there. But part of our responsibility is to identify what we need and then to begin to ask for it. Another thing we have to be real careful about is that even though the materials that come out initially aren’t wonderful, it’s still incumbent upon us to have that voice represented in the collection. This was exactly what happened in the early days of the women’s movement, and as the black community became more visible and began to demand more materials that fulfilled their particular information needs. We can’t sit back and say, “Well, they’re not the high-quality materials I’m used to buying.” They’re probably not, but if they are the only thing available, then I believe we have to get them into the library. [emphasis added]

According to Krug, intellectual diversity is of such paramount importance that it trumps even quality of material. And if resources are scarce, Krug believes it is the obligation of librarians to ask for them.

In remembering the books that so tantalized him as a boy, Keilman offered one other illuminating reflection: “If they never make the most-challenged list, it’s probably because no respectable school library would stock them in the first place.”

To read more on IFI’s response to “Banned Books Week” (and the Tribune), click HERE.

My ‘Reprehensible’ Take on Teen Literature
b
a
x
r