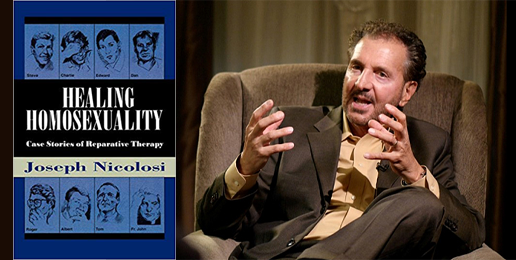 You’ve probably heard homosexual activists and “trans”-cultists mock the idea that Christians in First World countries are or ever will be persecuted. Well, here’s a news item direct from the expanding “That is NOT persecution” file: Catholic clinical psychologist Dr. Joseph Nicolosi Sr.’s books on reparative therapy for those who experience unwanted same-sex attraction are now banned from Amazon.

Since deliberately deceitful homo-activists relentlessly conflate “aversion” therapies, which can include the administration of pain, and reparative therapies, it’s important to clarify that Nicolosi’s counseling practice and underlying theories never included “aversion” therapy treatments, nor were they coercive. His treatment protocol was “talk therapy” intended to help clients better understand the environmental factors that may have contributed to the development of same-sex attraction in the hope of reducing such feelings. Nicolosi, who died in 2017, promised no particular outcome, engaged in no “aversion” therapies, and counseled no one who opposed counseling.

Whether one accepts or rejects his theories about the possible effects of childhood trauma on the development of same-sex attraction is irrelevant to an assessment of the ethical implications of and danger posed by Amazon’s de facto censorship. Many would argue that “born gay” or “born-‘trans’” theories are both devoid of conclusive proof and are destructive, and yet Amazon doesn’t ban the sale of books that promulgate those doctrinaire theories.

This remarkable political feat of getting e-commerce colossus Amazon to ban the sale of a book was achieved by British homosexual Rojo Alan who doesn’t like Nicolosi’s theories and set out on a campaign to undermine liberty by making it far more difficult for people around the world to access ideas Alan doesn’t like. He joined a petition drive, contacted Amazon, and through Reddit and Twitter encouraged people who hadn’t read Nicolosi’s books to leave bad reviews.

Our hard work finally fucking paid off!! We got the homophobic books pulled from Amazon!!! Thank you all for the help!!!!

On the 31st of May, I made a post on Facebook, asking all of you to help me in getting a number of homophobic books pulled from Wordery and Amazon.

The main book in question was one called, ‘A parents guide to preventing homosexuality’ by Joseph Nicolosi.

I asked for people to go to each website and leave a bad review and also contact the providers if possible.

After I had messaged Wordery, they took down the said book from their website within 24 hours.

However, Amazon did not as they said these books didn’t go against their rules. I wasn’t willing to let this be. So since then, I had been working on getting these books pulled. I contacted Amazon regularly to speak to them about the books, about how unethical they are.

For the most part, it felt I wasn’t getting anywhere. They would say to me “we will pass it onto the relevant team to look into.” and that was it. I was constantly checking Amazon to see if the books were still there, and they were.

It was frustrating. So I make a plan of attack. I realised me saying to them “these books are bad” wasn’t getting anywhere. So I started by posting on other social media websites, like Reddit and twitter – to get people to leave negative reives [sic] on these books. Someone on Reddit also pointed me to a petition that was created to have these books removed.

It took a couple of weeks but the rating on Amazon dropped from a 4 star to a 2 star. I was finally getting somewhere.

I then started to look deeper into things. I looked into the “rules of publishing” on Amazon, to see what sort of things they allow and don’t allow. Once I wrapped my head around that I started to look into the laws of conversion therapy. The legal side of things.

Once I gathered everything I went back to Amazon and I threw all the information I had at them in several conversations….

My last conversation with Amazon was 6 days ago on the 26th June.

As of today ALL THE ENGLISH LANGUAGE BOOKS BY JOSEPH NICOLOSI, HAS BEEN REMOVED FROM THE UK AND US AMAZON STORE!!!

This is such a huge fucking step in the right direction. Getting such a huge retailer to remove something like this.

Note Rojo Alan’s use of the term “homophobic.” The term means irrational fear or hatred of homosexuals, but that’s not what homo-activists mean when they use it. Even those who were counseled by Nicolosi and reject his theories have not accused him of being hateful. What Alan means by “homophobic” is ideas that dissent from the dogmatic theories and moral assumptions of the homosexuality-affirming community.

Apparently, the politically biased Amazon owned by the bigoted Jeff Bezos was only too happy to comply with a book-banning request—a decision rationalized by an appeal to Amazon’s elastic principles.

Amazon does, indeed, prohibit materials that are

libelous, defamatory, harassing, threatening, or inflammatory. For example, don’t…express hatred or intolerance for people on the basis of… gender or gender identity, religion, [or] sexual orientation.

But moral and ontological assumptions with which homosexual activists disagree do not constitute either hatred of or intolerance for persons. If they did, however, then any book that espouses Leftist moral and ontological assumptions about homosexuality should be banned as well because they conflict with theologically orthodox religious beliefs and, therefore, violate Amazon’s prohibition of materials that “express hatred or intolerance for people on the basis of religion.”

Rod Dreher, senior editor of the American Conservative, writes that Amazon still carries Mein Kampf by Adolph Hitler, Communism with the Mask Off and Bolshevism in Theory and Practice by Joseph Goebbels, multiple books by pro-Stalin apologist Grover Furr, and a “highly influential text by the Islamist radical Sayyid Qutb, Milestones, which calls on Muslims to wage relentless global jihad against non-Muslims and insufficiently radical Muslims, until the entire world is under radical Islamic rule.”

So many contradictions, so little time.

I guess Rojo Alan (and Amazon) missed these Amazon rules:

As a bookseller, we provide our customers with access to a variety of viewpoints, including books that some customers may find objectionable.

Don’t attempt to drown out other people’s opinions, including by posting from multiple accounts or coordinating with others.

By ignoring the drop from four stars to two stars in a two-week period of a book published years ago, Amazon also ignored its own product review guidelines that prohibit

How long will it be before Amazon bans the sale of other books that espouse ideas homo-activists and “trans”-cultists hate? And at what point will Leftists be forced to admit that Christians are, indeed, being persecuted?

All of these actions will constitute persecution of Christians because all violate theologically orthodox Christian beliefs regarding sexuality and God’s created order.

The persecution of Christians is on our doorstep. Christians need to be prepared, and it’s incumbent upon church leaders to prepare them.

“Indeed, all who desire to live a godly life in Christ Jesus will be persecuted,
while evil people and impostors will go on from bad to worse, deceiving and being deceived.”
(1 Timothy 3:12-13)