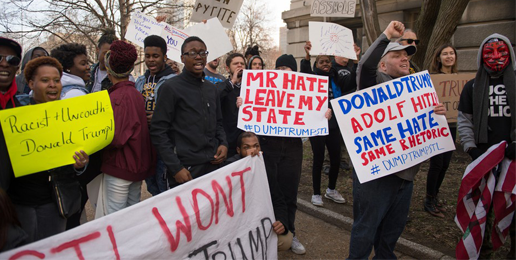 Given its prominence in current public discourse, one would think that hate, not love, is a many splendored thing.

The perfectly good word, which oozes out of every media pore, is now so overused that it means next to nothing.  Every time you turn around, someone is accused of “hate” merely for expressing disagreement.

This is not just a matter of semantics. It’s serious. When you cheapen a word, it discourages honest discussion and leads to more confusion and conflict, which is how the devil likes it. We have it on good Authority that the underworld thrives on mayhem.

One large organization, the Southern Poverty Law Center, has made hundreds of millions of dollars trafficking in hate. That is, they hatefully and falsely accuse others of hatred, even those whose only crime is to advocate traditional moral values.

The SPLC once performed a valuable service identifying genuine hate groups, such as neo-Nazis, and alerting the authorities to them. Now, it boasts a kitty of more than $300 million, stashes millions in cash in overseas accounts, and smears anyone opposing its increasingly radical sexual agenda.

In a full-page ad in the Washington Post this past week, the SPLC explained why it continues to label the Family Research Council a “hate group” on its online “hate map.” They quoted from FRC statements that warn that homosexuality is “unnatural,” has “negative physical and psychological health effects,” and is being peddled to children. They don’t bother trying to refute any of this because they can’t. And they don’t mention that a would-be assassin, inspired by SPLC’s hate map, tried to commit mass murder at FRC’s headquarters in 2012, thwarted only by heroic building manager Leo Johnson, who took a bullet.

While the SPLC spins out of control in its hateful obsession to criminalize Christian morality, it has plenty of ideological company that also plays the “hate” card. Name the cause, and if you’re not on the progressive side, you’re – what else? – a “hater.”

If you oppose extreme environmentalism and think Al Gore’s a bit overcooked, you “hate” the planet. And Bambi.

If you think that NFL players should stand out of respect for the flag when the national anthem is played, you “hate” black people and want police to abuse them.

If you believe marriage is as God ordained it – the union of one man and one woman – you “hate” homosexuals, transgenders, bisexuals, and polyamorists.

If you believe that America should defend its borders and have orderly, lawful immigration, you “hate” immigrants.

If you believe that militant Islam poses a serious threat, you “hate” all Muslims.

If you oppose the government takeover of the nation’s health care system, you “hate” poor, sick people.

If you support voter ID laws and other common-sense reforms that discourage voter fraud, you “hate” minorities.

Conversely, if you don’t hate President Trump, you are a monster. And a bigot. And a hater.

As with any emotion, hate in and of itself is not wrong. In Psalm 119, for example, we’re told to “hate every false way.” There are plenty of other verses where that came from by which we are exhorted to hate evil and favor what is good.

Personally, I hate the evil scheme to geld the Boy Scouts of America. This past week, the Scout leadership, if you can call it that, created the Unisex Scouts of America by eliminating the requirement that Boy Scouts be boys. Actually, they did that earlier when they welcomed girls who think they are boys, right after opening up to boys and even leaders who are sexually attracted to males. It’s hard to believe that the Scout headquarters is in Texas, where most people know cowboys from cowgirls and bulls from heifers.

The whole point of Scouting from its origin in 1910 was to help boys become masculine, virtuous, God-fearing men. The camping, knot-tying, merit badges and civic engagement are important, but they should not be confused with the organization’s raison d’etre – raising boys to be men.

In recent years, radical groups have charged the Scouts with “hate” for maintaining their policies even as the culture slid into decadence. Despite consistent court rulings favoring the Scouts, the pounding obviously took its toll on the weaker sisters at the top of the Scout food chain. So they caved. And caved. And caved.

All this to say, if you hate America, you must love the moral chaos swirling around us.