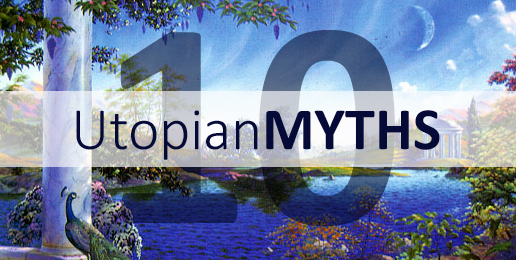 Here are the Top Ten Utopian Myths, in no particular order:

Myth 1. Life would be better if everyone had the same income and/or resources.

Truth: A totally classless society is impossible. All attempts at socialism (forced redistribution of wealth) have resulted eventually in overall collective poverty (and an insanely wealthy oligarchy who steals from the public).

Myth 2. If we could only communicate better, then we would understand each other, and we would all get along.

Myth 3. We can legislate our way to a perfect and peaceful society.

Truth: All law is an imposition of an external standard on someone who doesn’t want to embrace it. The problem is not a lack of legislation, it is that many people desire to do things that are harmful to others, and they always will. In case we haven’t noticed, criminals do not obey the law.

Myth 4. If would could get rid of all guns and nukes, we would have world peace.

Truth: There wasn’t world peace before the invention of guns and nukes.

Myth 5. Saving the environment will save our species.

Truth: Environmental crises are only a reflection of people’s hearts. Cleaning the environment, as important as that may be, does not intrinsically address the problem of the greed and carelessness that causes ecological problems.

Myth 6. Everyone should have the right to do anything they want to do as long as it doesn’t hurt anyone else.

Truth: Partly true, but you need to have a moral framework to know how use freedom responsibly (Individual Self-Government) or else that “freedom” will simply result in anarchy.

Myth 8. Words are tools of oppression used by the stronger elites to subjugate and control the weaker masses. The deconstruction of language will lead to egalitarianism and equal opportunity. (Postmodern argument)

Truth: Postmodernists are using words to convince of this supposed truth. Do you think they are hoping to control us?

Myth 9. We should embrace either all religions as equal and valid, or no religion at all.

Truth: Any worldview or philosophy answers (or seeks to answer) some fundamentally religious questions, such as:

All religions (including Atheism) answer these questions, but in fundamentally different and oppositional ways. The Law of Non-Contradiction (in formal Logic) requires that these contradictory truth claims cannot all be true at the same time, and in the same sense. It is impossible for humans to simply ignore these inherently religious questions.

Myth 10. If we can just get a president elected who espouses our views, then everything will improve.

Truth: In a representative republic, the elected leaders are a reflection of the people of that nation. The problems we see in our political leaders reflect our nation’s problems. Political leaders are not the intrinsic cure for our societal problems. They are far more of a thermometer than a thermostat, because we do not have a top-down governmental structure. Many of today’s political leaders seek to polarize our society and create controversy (to serve their own political agenda), rather than being the “public servants” they were traditionally called.

At best, the government can try to limit evil by punishing those who do what is wrong, in order to protect the citizens (which they certainly should do). In order to teach people right from wrong, however, we need parents to teach their own children. We need people to look to local church leaders instead of gansta rappers, jaded comedians and lying politicians. A true cultural reformation will always start in the heart, the home, and the church and then work its way into the community and out from there.