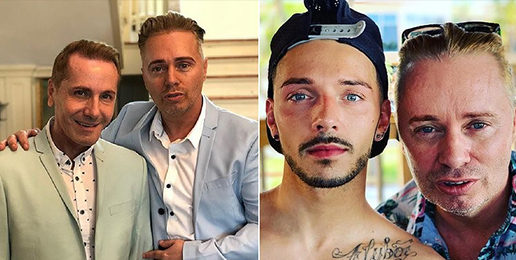 In 1999, then-30-year-old Barrie Drewitt-Barlow and his then-35-year-old partner whom he later “married,” Tony Drewitt-Barlow, purchased eggs from Tracie McCune and rented the womb of Rosalind Bellamy to acquire their first two children: a boy named Aspen and a girl named Saffron.

The fertilized egg that became Aspen split, so they froze Aspen’s identical twin, defrosted him four years later, and implanted him in the rented womb of another woman, Donna Calabrese. Aspen now has an identical twin brother Orlando who is four years younger than he is.

About nine years later, the millionaire Drewitt-Barlow fathers purchased yet more eggs, rented Calabrese’s womb again, and had two more boys, Dallas and Jasper, born in 2010. The biological mother is a “Brazilian model whom Barrie spotted on the catwalk and paid £35,000 for the privilege” of donating her eggs.

Both men contributed sperm to the selfish, dystopian reproductive project, and while they know which biological child each sired, they’re not telling the children. Apparently, the two men are entitled to children, but their children aren’t entitled to know who their biological fathers are.

In an interview with the Daily Mail in 2015, Tony, the older Drewitt-Barlow, proclaimed that their lifelong commitment was ironclad:

Barrie and I will never split up. We’re soulmates. But also we’d never do that to our children because of the pain it would cause.

Our family has too many boys and too much testosterone! So we used sex selection to even things out. We know we are having girls. … We found a beautiful, young, educated egg donor. … We met 15 egg donors at the Beverly Wiltshire hotel, the hotel in the film Pretty Woman. We decided that would make the perfect setting to find the woman who would add the part of the DNA for our baby girl. Once we found our surrogate we transferred three blastocysts (embryos), two girls fertilised by Scott and one girl fertilised by me.

Barrie, his young paramour Scott, his ex Tony, Aspen, Saffron, Orlando, Dallas, Jasper, and the triplets will all be sharing the same home—just one big, strange family created to satisfy the desires of selfish adults.

Barrie isn’t done yet with his profligate inseminating. He donated sperm to a lesbian couple in the U.K. who will be giving birth one month before his and Scott’s triplets are born here in the United States.

Barrie writes about the nature of the homoerotic relationship into which he’s bringing three babies:

I know people will think Scott is only after my money and all that — he is, after all, 25 years younger than me — but I don’t care. I’m going to enjoy every moment that I can, while I can. After all, you only have one life.

The damage done to children’s rights and needs by the sexual revolution—from the denial of family through divorce and sperm and egg donation to the “trans”-cultic destruction of their hearts, minds, and bodies to their extermination in the womb—constitutes the justice issue of our time. How many presidential candidates who claim to care about social justice will address it?