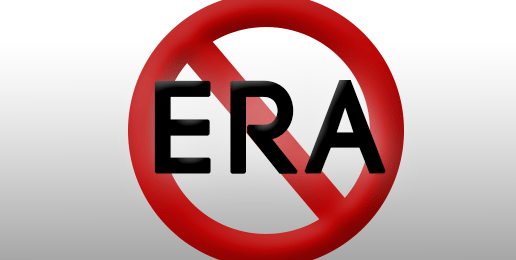 Thanks to Illinois Senators Heather Steans (D-Chicago), Mattie Hunter (D-Chicago), David Koehler (D-Peoria), Iris Martinez (D-Chicago), and Pat McGuire (D-Joliet), the Equal Rights Amendments (SJRCA 75) is rearing its ugly, genderless head again. These lawmakers, at the urging of Governor Patrick Quinn, have re-introduced a proposal to amend the U.S. Constitution to eradicate sex as a legitimate characteristic on which to base reasonable distinctions. In other words, these “progressive” lawmakers would like it to be impermissible for any organization, policy, or law to take into account the very real and important differences between men and women.

This amendment would add these words to the U.S. Constitution: “Equality of rights under law shall not be denied or abridged by the United States or any State on account of sex.” Of course, no one wants the rights of men or women to be denied or abridged, but that’s not really what concerns the proponents of the ERA. What they really want to do is promote their assumption that differences between men and women are irrelevant accidents of birth and that in all contexts men and women should be treated as not merely equal in value but identical in nature. While proponents claim this bill is needed to protect women, note that nowhere in the text of the bill is the word “woman” or “women” even mentioned.

Like all ambiguously written laws, the ERA sounds reasonable enough. “Progressives” toss in a reference to equality to bills designed to serve a host of troubling Leftist goals and hope non-thinking constituents will ignore the future applications of the bill.

But before patriotic visions of suffragettes begin dancing in your heads, spend a moment ruminating on these future applications of the ERA—the ones that Leftists don’t mention:

1. Abortion–The ERA could be used to effectively nullify or invalidate laws that restrict tax-funded abortion. The National Right to Life Committee (NRLC) explains that multiple legal experts, including state supreme courts, have argued that the language of the ERA “makes it unconstitutional for…Medicaid programs to refuse to fund ‘medically necessary’ abortions (which just means, abortions performed by licensed medical professionals) if procedures sought by men (e.g., prostate surgery) are funded.”

A New Mexico Supreme Court judge wrote that “there is no comparable restriction on medically necessary services relating to physical characteristics or conditions that are unique to men. Indeed, we can find no provision in the Department’s regulations that disfavor any comparable, medically necessary procedure unique to the male anatomy… [the restriction on funding abortions] undoubtedly singles out for less favorable treatment a gender-linked condition that is unique to women.” This judge neglected to mention the inconvenient presence of preborn babies that render abortion wholly different from any “medical procedure unique to the male anatomy.”

Further, the NRLC writes that “This same analysis—that limits on abortion are by definition a form of sex discrimination and therefore impermissible under ERA—will be used to invalidate laws requiring parental notification or consent for minors’ abortions; any federal or state restrictions even on partial-birth abortions or third-trimester abortions; and federal and state ‘conscience laws,’ which allow government-supported medical facilities and personnel—including religiously affiliated hospitals—to refuse to participate in abortions.”

The ACLU writes, “Hundreds of bills that place limitations and restrictions on vital reproductive health care services [i.e., abortion] have been passed by Congress and state legislatures. The Equal Rights Amendment would provide another important weapon in the battle to resist this legislative onslaught aimed at destroying women’s rights to make their own reproductive decisions.”

2. Homosexualilty— The ERA would effectively integrate so-called “rights” based on same-sex attraction (i.e., “gay rights”) into the U.S. Constitution.  The ERA would most certainly be used to invalidate state laws and constitutional amendments establishing marriage as a sexually complementary union.

3. Gender confusion/Gender Identity Disorder–The ERA would be used to invalidate any laws or policies that prohibit gender-confused men and women from using restrooms, locker rooms, and dressing rooms designated for the opposite sex.

4. Education–The ERA could affect education in the following ways:

The ERA could be used to compel single-sex schools and colleges to be coeducational.

It could be used to compel public middle and high school and college single-sex athletic programs to be coed.

The ERA could be used to compel fraternities, sororities, Boy Scouts, Girl Scouts, YMCA, YWCA, and even mother-daughter and father-son school events to be open to the opposite sex.

Since the ERA seeks to apply the same rules to sex that apply to race, the ERA jeopardizes the tax-exempt status of even private religious schools and colleges that in some contexts treat males and females differently. For example, if a Christian college is not permitted to house different races separately, it wouldn’t be permitted to house men and women separately without risking its tax-exempt status.  In this context, the comparison of race to biological sex fails in that while there are no substantive differences in nature between people of different races, there are significant differences in nature between men and women.

5. Military–The ERA could be used to invalidate the exemption for women from draft registration and conscription.

6. Government power–Section II of the ERA states that “The Congress shall have the power to enforce by appropriate legislation the provisions of this article.” Eagle Forum explains that “Section II of ERA would give enormous new powers to the Federal Government that now belong to the states. ERA would give Congress the power to legislate on all those areas of law which include traditional differences of treatment on account of sex: marriage, property laws, divorce and alimony, child custody, adoptions, abortion, homosexual laws, sex crimes, private and public schools, prison regulations, and insurance. ERA would thus result in the massive redistribution of powers in our Federal system.”

To ratify this proposed amendment, “progressives” are attempting to circumvent deadlines that expired over three decades ago on the supposedly moribund ERA. The ERA, first introduced in 1972, had a seven-year deadline for ratification, which, by a Congressional resolution was extended another three years.

The proposed ERA amendment needs 38 states for passage. By its final deadline in 1982, it had the approval of only 35 states, so supporters developed the “three-state strategy” which seeks to avoid returning the issue to all 50 states.  In effect, Quinn and his legislative accomplices are claiming that since the ERA was extended once, deadlines can be extended in perpetuity. In other words, deadlines, like Obamacare regulations, can be ignored at the whim of “progressives.”

Quinn’s pals defend their strategy to pass the ERA by comparing it to the passage of the twenty-seventh amendment to the U.S. Constitution 203 years after it was proposed. They fail to mention, however, that the twenty-seventh Amendment, unlike the ERA, did not have a ratification deadline.

Proponents of the ERA also argue that because the ERA ratification deadline was in the preamble rather than the body of the ERA, it’s essentially irrelevant and non-binding. But the Congressional Research Service explains the following:

In the case of the 18th, 20th, 21st, and 22nd Amendments, the “sunset” ratification provision was incorporated in the body of the amendment itself. For subsequent amendments, however, Congress determined that inclusion of the time limit within its body “cluttered up” the proposal. Consequently, all but one of the subsequently proposed amendments proposed later (the 23rd, 24th, 25th and 26th, and the ERA) placed the limit in the preamble, rather than in the body of the amendment itself.

It’s important to note that prior to the ratification deadline, five states had sought to rescind their approval of the ERA. The Supreme Court of the United States was poised to take up their cases when the deadline took effect at which point the Court held that their cases were moot. If the deadline is now rendered moot by liberal lawmakers, one would assume that those states that sought to rescind their approval would be able to proceed with their pursuit of “rescission of acts of ratification.” In other words, it would seem that those states that wished to rescind their approval of the ERA would be able to pursue that effort because their pursuit ended based on the legal legitimacy of the ratification deadline.

Take ACTION: Please CLICK HERE to contact your state senator to ask them to vote AGAINST the Equal Rights Amendment, SJRCA 75. The ERA will not help women. Instead, it will harm women, their families, and our society.