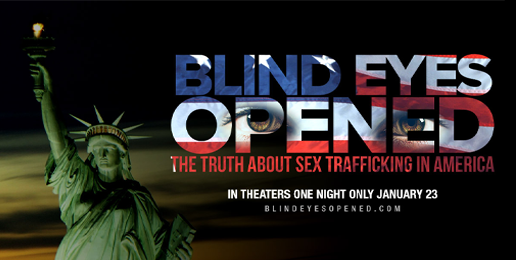 The following are all true stories. No names have been changed:

These are not outlying scenarios. This is the new face of human trafficking – also called modern slavery – in America. It’s happening in our cities, in our suburbs, and even in our schools during lunch and after school hours. And the children involved are getting younger and younger. Sometimes they’re physically held against their will (as in literal chains). Other times they are coerced under threat of harm to themselves or to someone they love. Lexie’s handlers, for example, told her if she didn’t cooperate, they would have her six-year-old sister take her place.

Often the trafficker is known to the child, as in the case of Edie and Lexie. Other times, it’s a predator who knows how to spot a vulnerable target and lure her into his net, the way Brook and her friend were easily eyed and ensnared. Social media has become a veritable hunting ground for children, as grown men posing as “friends” are continually casting for relationships with them online, gradually gaining trust until an opportunity arises to make a move. Another means of entry is the offer of a modeling or acting contract. (Believe it or not, adults fall for this on behalf of their children.) Boys are trafficked too. Studies vary, but estimates say 10-15 percent of trafficked children are boys. And as you can see, women can be complicit or actively involved as perpetrators.

Note also that these things are happening in America, not just “somewhere else.” In 2016, the U.S. led the world as a consumer of commercial sex. Massage parlors, dance clubs, and large-scale gatherings, such as major sporting events or conventions, are supply and demand breeding grounds, and it’s important to know that women of adult age working in legal sex establishments may not be there of their own volition. Some have been trafficked in and are being held under coercion or threat, and of those who weren’t, many still feel trapped because they see no way out. For those whose eyes have been trained to see it, America has become a nation of distributed red-light districts.

Geoffrey Rogers saw it, and in 2011, he left an executive position at IBM to take it on. Together with former major league baseball manager Kevin Malone, he co-founded the U.S. Institute Against Human Trafficking. He is also president of Ships of Tarshish Films, and Edie’s, Lexie’s, and Brooke’s stories are told in his film, Blind Eyes Opened: The Truth about Sex Trafficking in America. As the title implies, part of its purpose is to help us learn to see the signs of trafficking. That alone makes it important viewing, but it goes well beyond that. Six years in the making, Blind Eyes Opened is packed with information: preventive measures we all can take, what to do in the event we suspect someone is being trafficked, and how we in churches and communities can minister to those who’ve been entangled in this web, past or present.

Although the subject matter is difficult, it’s a beautiful and hopeful film – a full-throated call to the church to engage in this spiritual battle, minister to the wounded, and put an end to this evil in our midst. Blind Eyes Opened will be showing in theaters, one night only, on January 23rd. Click here to see the trailer, or here for theaters and showtimes. If you can’t make a showing, click here to learn more about how you can join this fight.