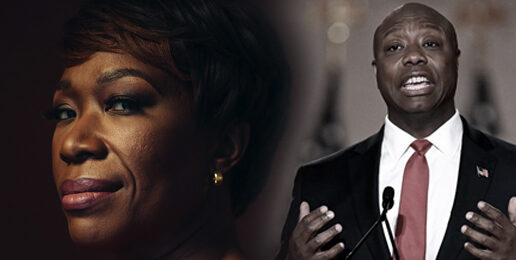 The dust that racist bullies tried to kick in the face of the honorable U.S. Senator Tim Scott for his crime of delivering a far superior speech in response to Biden’s lackluster recitation before a sparsely attended joint session of Congress has not quite settled.

In addition to delivering a poignant, inspiring speech, Sen. Scott committed the crime of rejecting the dogma spewed by leftists who detest tolerance, inclusivity, and free-thinking—especially from blacks whom they desperately need to keep chained to the Democrat Party.

In order to malign Sen. Scott, MSNBC’s oft-deceitful Joy Reid had to misrepresent what he said. In a scornful tone, she imitated Scott, saying, “This isn’t a racist country. There’s no racism here.”

The first problem is Sen. Scott never said, “There’s no racism here.” He said America is not a racist country—big difference that apparently escaped Reid.

America is constituted and defined centrally by the principles delineated in our founding documents—documents which assume the existence of God–and Americans can be justifiably evaluated in terms of how they align with those principles. The Left is now moving America at a precipitous pace away from the Constitution and God and toward racism and other forms of oppression.

There are lawless anarchists who loot and burn private businesses in America. Is America, therefore, a lawless, anarchical country?

Joe Biden said America is not a racist country, and Kamala Harris said Americans are not racists. In Reid’s view, are they racists?

“Progressives” have spewed virulently racist comments at Sen. Scott in the hours and days since his response. In Reid’s view, is “progressivism” racist?

Not to be outdone by Reid in the creepy racism department, MSNBC host Tiffany Cross described the “inside” of Sen. Scott’s head as “hollow,” asserting that he represents “no one but the sleepy, slow-witted sufferers of Stockholm syndrome who get elevated to prominence for repeating a false narrative about this country that makes conservative white people feel comfortable.” Cross called him Mitch McConnell’s “tap dancer,” and a “token” who is “thirsty for white approval.”

That’s rhetoric that would make a KKK grand wizard smile.

Cross claimed that when blacks speak “an uncomfortable truth, like Nikole Hannah-Jones [author of the 1619 Project], the party that Scott claims is not racist gets big mad and tries to silence you.” Her evidence for the outlandish claim that Republicans try to silence black “progressives” was that “Senate minority leader Mitch McConnell asked Education Secretary Miguel Cardona to scrap teaching of the 1619 Project.” Perfect encapsulation of the “progressive” belief that their freedom to do (or have) anything requires government subsidization.

Not using tax dollars or providing federal support for a particular curriculum does not constitute silencing it. And Republicans don’t object to the 1619 Project being taught in government schools because it articulates “uncomfortable” truths. They object to it because it’s a biased load of propaganda that many historians—including historians of color—find historically inaccurate.

While we digest the unsavory tripe that racist “progressives” are force-feeding us, trying to gaslight Americans into believing the freest, least racist country in the history of the world is “systemically racist,” let’s ruminate on a few questions.

Which political party supports the sale and purchase of humans (or genetic material to create humans)?

Which party separates children from mothers or fathers?

Which party declares some humans to be non-persons?

Which party denies children the freedom to go to good schools?

Which party tries to command persons of color what to think and say?

Which party is obsessed with skin color, averring that skin color matters more than character?

Are “progressives” like Reid and Cross concerned about the disproportionate number of black babies being slaughtered in their mothers’ wombs every year? Black Arizona State Representative Walt Blackman sure is:

Abortion impacts African Americans at a higher rate than any other population group. In 2011, the Centers for Disease Control and Prevention released an Abortion Surveillance Report. According to that report, black women make up 14 percent of the childbearing population. Yet, 36 percent of all abortions were obtained by black women. At a ratio of 474 abortions per 1,000 live births, black women have the highest ratio of any group in the country. …

A study by Protecting Black Lives, in 2012, found that 79 percent of Planned Parenthood’s surgical abortion facilities are located within walking distance of minority communities.

In the past, we criticized the tobacco industry for targeting young people with their advertising. Recently, the nicotine vape industry has been criticized for similar practices. The prevalence of abortion providers in African American and Hispanic neighborhoods indicates the abortion industry is targeting too. It smacks of the eugenics-linked past of Planned Parenthood founder Margaret Sanger and her views of contraception and abortion as ways of diminishing the black population.