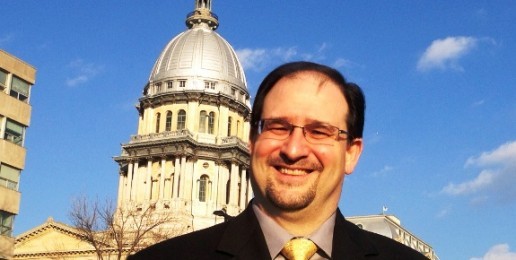 The Senate Executive Committee decided to override Illinois history this afternoon by approving SB 10 which redefines marriage to include two individuals of the same sex. The bill passed out of committee by a 9-5 vote along party lines.

The bill now moves to the full Illinois Senate for its consideration, with a possible vote coming on Valentine’s Day (February 14th).  If it were to pass the Illinois Senate, it would move to the Illinois House for a committee hearing.  This makes the February 20th Defend Marriage Lobby Day more important than ever.  This planned lobby day couldn’t come at a better time. We have a very good chance of stopping this bill in the Illinois House IF we show up and speak out!  (Read more HERE.)

Take ACTION:  If you haven’t yet sent an email or a fax to your state lawmakers, please do it now!  Click HERE to let them know what you think.

The state does not have the moral authority to redefine what all societies have understood marriage to be: a comprehensive union of one man and one woman. The government merely recognizes and regulates marriage, and it does so because it has a compelling interest in the health, welfare, and inherent rights of children—the next generation.

ADF Legal Counsel Joe La Rue (pictured above), who testified in the committee hearing, had this to say about today’s committee recommendation:

The bill to redefine marriage provides inadequate safeguards for religious liberty. It leaves churches and religious organizations at the whim and mercy of the courts who will have to interpret the marriage redefinition law and how it interacts with Illinois’ public accommodation and employment non-discrimination laws.

Simply put, this bill does not protect churches and religious organizations from having to rent their facilities to same-sex couples for wedding ceremonies, even when doing so violates the church’s religious beliefs. Nor does the bill protect churches and religious organizations from being forced to hire employees from same-sex marriages. The bill also provides no protection for individuals, like wedding photographers, who object to same-sex marriages but may be asked because of their business to participate in same-sex ceremonies.

This law does not protect religious freedom as it claims. Rather, it promotes religious intolerance, bigotry and discrimination.

Marriage has an inherent nature that the government merely recognizes and regulates. The government does not create marriage. The sole reason that justifies government involvement in marriage is that conjugal unions are the type of unions that produce children. Some argue that homosexual couples are raising children, so they too should be permitted to marry. But it is not merely the presence of children that creates marriage. If it did, then two aunts who were raising children together should be permitted to marry.

In his annual Mother’s Day and Father’s Day proclamations, President Barack Obama has affirmed the essential roles that both mothers and fathers have in the lives of their children. This political agenda necessarily denies that these roles are essential.

Neither SB 10 nor its sponsors have addressed the question of whether children have any inherent rights to know and be raised by their biological parents.

The revisionist view of marriage, which is reflected in this radical proposal, argues that the sole necessary feature of marriage is the presence of feelings of romantic love and that marriage has no inherent connection to sexual complementarity or reproductive potential. If that view is true, then there is no rational justification for prohibiting plural or incestuous same-sex unions.

Further, the legalization of same-sex “marriage” will undermine religious liberty as even homosexual legal scholars have affirmed. We have already witnessed the loss of religious liberty that is the logical outcome of government recognition of same-sex unions. Immediately following the passage of the Religious Freedom Protection and Civil Union Act, Catholic Charities and the Evangelical Child and Family Agency lost their right to have their child placement policies reflect their religious beliefs, and a Christian business owner was sued for refusing to rent his bed and breakfast to a homosexual couple for their civil union ceremony.

When the traditional views of marriage are deemed discriminatory, the religious liberty of those who hold them will be diminished.