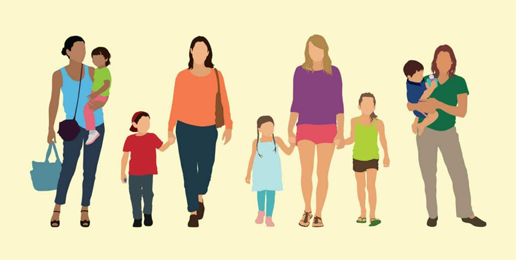 Responding to the Rise of Single Motherhood and Feminism
Written By Kristi Shaffer   |   09.21.21
PRINT

Fatherless children are quickly becoming the norm in the United States. At one time, it was primarily young and poorly educated women who became single mothers. Today that trend is changing. Educated women in their mid-thirties are often having their first child outside of marriage. A quick search on the internet results in a plethora of articles touting single motherhood.

Society seems enamored with the idea that women do not need men to “have it all.” Instead, they can have the education, the career, and the child without the burden of marriage. However, what are the effects of eliminating the father’s role in a child’s upbringing and how should Christians respond?

According to the 2020 census report, over 10 million single-parent homes exist in the U.S., and women head 80.5 percent of those homes. Half of the single mothers have never married, a third are divorced, and the remainder are either separated or widowed. Despite many single mothers being more educated than in previous decades, the single-parent poverty rate remains high. Poverty among single mothers is at 29 percent. Food insecurity and hunger are on the rise as a result.

Economic problems are not the only pressing problems experienced by single mothers. Dr. David Popenoe, Professor Emeritus of Sociology at Rutgers University and co-developer of the National Marriage Project, has noted that a father’s involvement in his child’s life is beneficial to the child’s sense of happiness and well-being. Children with involved fathers are more likely to succeed academically and are twice as likely to attend college as children without involved fathers. Fathers also play a role in children developing problem-solving skills, empathy, and independence. The lack of a father can severely stunt these beneficial emotional developments.

For decades, researchers have noted the lasting effects of fatherlessness on children. Poverty, drug and alcohol abuse, and various emotional problems are all associated with the lack of a father figure. There has even been a correlation between fatherlessness and increased suicide rates in children. Children are profoundly affected by the absence of fathers.

There are numerous reasons why women are becoming single mothers, including personal choice. Although Christians may disagree with women choosing to parent alone, it is essential that the church not ostracize them and their children. The church should also not assume that every single mother is parenting alone by choice. Instead, it is up to the Christian church to support single parents lovingly while also promoting fatherhood and the benefits of two-parent households.

“Pure and undefiled religion before God and the Father is this: to visit orphans and widows in their trouble, and to keep oneself unspotted from the world.”

The church should also educate men about the importance of being involved. Even when divorce occurs, men should still play a vital role in their children’s lives, and they need support and encouragement in fulfilling their roles from the church. Male mentors and small groups for men and single-fathers could provide the necessary resources.

The church should expose the lies of the feminist movement that tells educated women they can “have it all” without having a marriage. Women need instruction on the value of marriage and the roles played by both parents. The church should encourage women to ensure children have positive male role models even when fathers are absent.

“There is a generation that curses its father, and does not bless its mother.”

It would seem the birth of that generation is at hand. The lack of father figures has led to all sorts of degeneracy, and feminists are purposefully expunging husbands and fathers. As a result, increasing numbers of children are rejecting authority and cursing their fathers and mothers. For this reason, the church has much work to do in restoring a God-centered understanding of the importance of two-parent households.