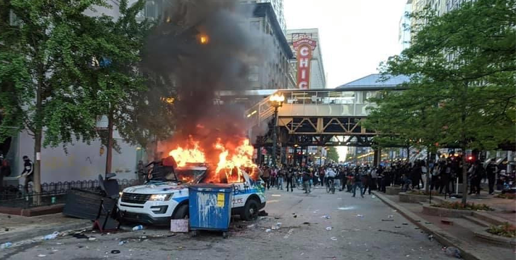 Overt, organized violent riots over the weekend escalated in such a way that the governors in twenty-three states thought it was necessary to activate the National Guard to augment local police efforts. In Illinois, these riots were not limited to downtown Chicago but spilled over into various city neighborhoods and suburbs like Arlington Heights, Richton Park, Calumet City, Tinley Park, Riverside, Orland Park, Blue Island, and Lansing. In Dolton, rioters thought it was a good idea to throw a brick through the window of Christ Oasis Church.

Reports of the peaceful protests, of which there were a few, were overshadowed by wall-to-wall news coverage of violence, vandalism, looting, and arson locally and in cities across the nation. In Washington D.C., “the church of the presidents” was set on fire by godless insurgents. The damage to St. John’s Church (est. 1816) symbolizes our culture’s rejection of God. Perhaps God has lifted His hand of protection in response to our rebellion and indifference to His precepts.

It was encouraging to hear Chicago Mayor Lori Lightfoot and Police Superintendent David Brown confirm the suspicions of many that the attacks were coordinated. Listen to their remarks:

Similarly, Minnesota’s attorney general and left-wing “progressive” Keith Ellison told Fox News Sunday that he has “evidence that outsiders have been present and, in some cases, have played a very negative role” in the riots.

There is little doubt who led these attacks. Antifa and Black Lives Matter, both left-wing groups that hate America, were front and center. It is likely that local street gangs composed of fatherless young men who despise law enforcement were also involved.

But questions abound. Were these organized efforts funded? If so, by whom? Were some of these violent agitators paid? Were they given a list of targets to burn, loot, and destroy? I wonder where all those criminals they let out of prison early are right now? If I were a betting man, I’d wager that some were looting, vandalizing, and setting fires.

Take ACTION: Click HERE to send a message to President Trump, Vice President Pence, and our federal lawmakers asking that the DOJ begin a criminal investigation to identify and prosecute the domestic enemies behind these organized efforts to destroy our cities. The FBI, the Bureau of Alcohol Tobacco Firearms and Explosives, and the U.S. Attorney’s office must use their resources to get to the bottom of this.

Left-wing political operatives want to make the murder of George Floyd and victims like him solely about race. That is a superficial reading of the problem, as it goes much deeper than that. It is an issue of the human condition.

Let me be unequivocal: Based on the horrific video clip and autopsy report, we condemn the lethal actions of Derek Chauvin and the inaction of the Minneapolis police officers. There is little doubt that their policing authority was abused and the civil rights of Mr. Floyd fatally quashed.

Additionally, we unambiguously support peaceful protests and political actions that demand justice in this case. Using the political tools we have been given to safeguard God’s gift of self-government is the way to address injustices and grievances. We do not and cannot support violence, vandalism, looting, and arson as it only spreads injustice and disunity. (1 Peter 3:8-14)

Jeremiah 17:9 teaches us that the “heart is deceitful above all things, and desperately wicked; Who can know it?” This is the human condition, we were born with a sinful nature (Psalm 51:5).

In Mark 7:1-23, Jesus tells us that from our unregenerate heart

As our culture drifts further and further away from God, we see an increase in the acceptance and practice of sin. Roman 1:28-32 tells us what to expect:

And even as they did not like to retain God in their knowledge, God gave them over to a debased mind, to do those things which are not fitting; being filled with all unrighteousness, sexual immorality, wickedness, covetousness, maliciousness; full of envy, murder, strife, deceit, evil-mindedness; they are whisperers, backbiters, haters of God, violent, proud, boasters, inventors of evil things, disobedient to parents, undiscerning, untrustworthy, unloving, unforgiving, unmerciful.

Certain operatives want to use the Floyd tragedy for political purposes, to divide our country along racial and ethnic lines. Intersectionality is all the rage. Divide and conquer is not only a ploy of the “progressive” agenda, but a key tactic of the devil.

In addition, in John 8:44 Jesus warns us that Satan is a murderer, a liar, and a deceiver:

He was a murderer from the beginning, and does not stand in the truth, because there is no truth in him. When he speaks a lie, he speaks from his own resources, for he is a liar and the father of it.

One of Satan’s goals is to divide us. (Matt. 12:25; Mark 3:25; Luke 11:17) Satan wants us to be bitter, ungrateful, angry, discontent, so he lies to us about our condition and God’s goodness. The New York Times‘ 1619 Project is a prime example of this effort to deceive Americans into a sinful attitude. Instead of being grateful to God for every challenge and circumstance (1 Thessalonians 5:18), resentment, bitterness, and suspicion are fostered. Every one of us should be thanking God for the privilege of living in this amazing country at this time in history, where the poorest among have a higher standard of living than royalty did throughout most of history.

We no longer live in a culture that has a Christian worldview. The residue of God’s blessings on this nation is wearing thin. We have been living off the cultural capital that came as a result of the faithfulness of previous generations. Nonetheless, we have been called at such a time as this to be ambassadors for His Kingdom (2 Corinthians 5:20).

As this spiritual battle waxes and wanes, our fervent and resolute prayers must intensify. We should redouble our prayers for our family members, our church, our neighbors, our state, and our nation.

Likewise, we need to be wise about how we spend our time, talents, and treasures. Are we investing in temporal goods and goals, or are we working to advance the Kingdom of God, to see His will done on earth as it is in heaven? (Matthew 6:19-20-21)?