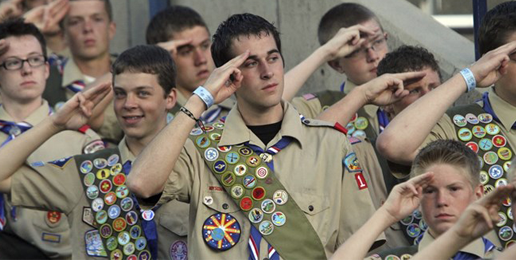 Mormon Exodus from Scouting Is Good for Boys
Written By Robert Knight   |   05.18.18
PRINT

It’s official. The Mormons have finally figured out that they can’t do business with the devil. Bully for them.

More specifically, the Salt Lake City-based denomination is flipping off the demonic forces assigned by Beelzebub to wage war on God’s creation of male and female.

That’s where the minions of Hell have been concentrating their firepower in recent years.  It’s not for nothing that we’ve been told, over and over, that male-female differences are irrelevant and reality is entirely subjective.

But, be of good cheer. Resistance to the cultural insanity is growing.  Last Tuesday, the Church of Jesus Christ of Latter-Day Saints announced a parting of the ways with what used to be the Boy Scouts of America.

The Mormons have tried to look the other way since 2013, when the Scouts permitted gay members.  But it just got worse.  The Scouts’ century-old moral code, itself derived from Biblical morality, was pummeled from within and without.  The coup de grace was ordered by liberal corporate donors and performed by quisling BSA board members.  I bet none of them can tie a decent knot, but they sure can sabotage a great American institution.

Well, as noted, the Mormons have had enough.  Last year, the LDS pulled 185,000 boys aged 14 to 18 out of the Scouts.  When the remaining 425,000 boys depart for Mormon youth organizations, it will represent a nearly 20 percent decline in Scout membership, which is now at 2.3 million and falling from a high of 4 million back in the 1960s.

The Boy Scouts were never a genderless service organization like 4-H or other youth groups.   Boy Scouts were taught to be strongly masculine gentlemen guided by timeless values, such as respecting girls and women instead of identifying with them.  They molded millions of boys into modern-day knights, not just “persons.”

Despite winning every single court challenge to their policies, the Boy Scouts had been doing a duck and hide.  They abandoned public defense of their values and embraced only freedom of association, which any bone-headed group could claim.

In May 2015, BSA National President Robert Gates said that keeping out openly gay leaders “cannot be sustained.”  Sure, it could have.  But that would have meant actually fighting the bullies.  So, instead, the BSA National Executive Board voted to overturn the common-sense policy that had protected boys since 1910.  For some reason, this craven stunt did not settle things down.

Mr. Gates was not exactly new to this.  He was the Secretary of Defense under Barack Obama who orchestrated the end of the military’s “Don’t Ask, Don’t Tell” policy against open homosexuality.

He has since gone on to be chancellor at the College of William and Mary, which was chartered in Williamsburg, Virginia in 1693 and named after the British royal couple.  As far as we know, neither William nor Mary ever got confused as to who was king and who was queen.

But back to the Organization Formerly Known as the Boy Scouts of America.  Following Mr. Gates’s lead, the Scouts announced on January 30, 2017, that girls who think they’re boys could enroll in previously boys-only programs.  On May 2, they finally took “Boy” out of the Boy Scouts and changed the name to Scouts BSA.

I wonder if the Girl Scouts, who are decidedly peeved at the brazen poaching of their potential recruits, will follow suit and excise “girl.”  They kicked God out of their oath long ago and have welcomed transgenders, so why not?

When the Boy Scouts began caving in 2013, Mormon leaders and some Protestants and Catholics tried to finesse it, extracting a promise that their troops could keep their own values.

More and more people are finding out the hard way that there is no placating Leftist bullies who mean to remake America into a socialist version of Sodom and Gomorrah.

That’s why some farsighted former Scout leaders founded Trail Life USA in 2013 to pick up the mantle. Now chartered in 48 states, Trail Life, while unabashedly Christian, welcomes all boys who abide by their standards. They work right alongside the American Heritage Girls, founded by former Girl Scout leaders for similar reasons.

I’ve met with Trail Life’s leaders, and they are stand-up guys.  As an Eagle Scout, I’d be proud to see boys in our family benefit from what Scouting used to offer and Trail Life USA still does.

This article was originally published by Townhall.com

Did You Know? Pro-Family Trump Administration Victories
b
a
x
r