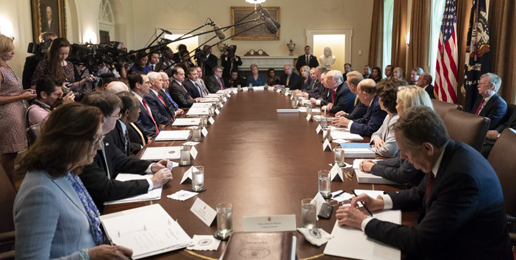 The U.S. Department of Health and Human Services (HHS) began enforcing the new rule, which “prohibits the use of Title X funds to perform, promote, refer for, or support abortion as a method of family planning.” As a result, nearly 900 abortion clinics have lost taxpayer funding. This is a great first step toward the goal of completely defunding abortion businesses (like Planned Parenthood) of our tax dollars.

HHS has also rescinded Obama administration guidance that prevented states from taking actions against providers that may be necessary to prevent Medicaid funds from going to fund abortion.

HHS has created a Conscience and Religious Freedom Division for the purpose of protecting the fundamental and unalienable rights of conscience and religious liberty for physicians and other medical professionals.

HHS has also proposed defining sex as either male or female, unchangeable, and identified at birth. In addition, agency staff—including those at the Centers for Disease Control—have been instructed to stop using the word “transgender” in official reports.

The U.S. Department of Defense has banned persons suffering from gender dysphoria from serving in the military.

The U.S. State Department is refusing visas for same-sex partners of some diplomats and U.N. workers if they are not “married.”

The U.S. Departments of Education and Justice eliminated Obama Administration “guidance” that told government schools to treat “trans”-identifying students as if they were the sex they are not.

The U.S. National Institute of Food and Agriculture rescinded guidance for 4-H programs, removing a policy specifically welcoming LGBTQ children in the program, which led to the firing of an official who protested.

The U.S. Department of Education refuses to respond to civil complaints filed by “trans”-identifying students, including those who were barred from using opposite-sex bathrooms.

The U.S. Department of Justice rolled back Obama-era LGBT interpretations of the Civil Rights Act that gave special rights to “trans”-identifying and “non-binary” workers from employment discrimination and ceased enforcing non-discrimination protections.

The U.S. Federal Bureau of Prisons rolled back an Obama-era policy that housed “trans”-identifying prisoners with opposite-sex prisoners.

The U.S. Department of Housing and Urban Development has proposed a rule to permit homeless shelters to house “trans”-identifying and/or cross-dressing homeless persons in shelters based on their biological sex.

The Trump Administration has interpreted immigration rules specifically so the child of a same-sex couple born abroad via surrogate would be considered “born out of wedlock,” thereby making it more difficult to obtain U.S. citizenship.