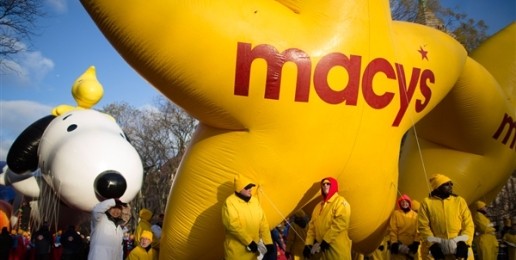 Correction: Macy’s has stated that it was the victim of a “prank” that involved a flyer falsely advertising an event involving Santa in “kinky boots” to be held at the State Street store in Chicago. IFI regrets including a discussion (since removed) of that flyer in this article about the troubling Kinky Boots performance in Macy’s Thanksgiving Day parade.

Like many Americans, you probably spent Thanksgiving Day at home with your family engaged in any number of family traditions, including watching the Macy’s Thanksgiving Day parade.  So, did you enjoy the drag queens in “kinky boots” during the parade? For those who didn’t see the parade, take a few moments to watch this video clip of this controversial parade performance.

Macy’s invited the cast of the musical Kinky Boots to be part of their parade this year, apparently thinking the world needs to see kinky drag queens dancing in their boots in order to fully grasp what equality, tolerance, and Thanksgiving are all about.

The show centers around a drag queen who helps turn a shoe factory around with, you guessed it, kinky boots. In case you’re unfamiliar with this award-winning musical, you can click here to learn more.

The musical has limited family appeal as most parents don’t want to take their children to see drag queens, so it was both curious and controversial when Macy’s invited the cast to take part in the Thanksgiving Day parade. Surely Macy’s management knew there would be many young children watching live and from home. Did Macy’s management care that exposure to drag queens would compel parents to talk to their children about a topic that many consider age-inappropriate? It’s one thing to put gender confusion on display for adults who at least have enough experience to understand what they’re seeing. It’s another thing to expose children to this confusion,  many of whom will have questions about why men are dressed as women.Is there no musical that Macy’s could find to illuminate the message of and spirit of Thanksgiving other than one that celebrates a behavior that God condemns (ie., cross-dressing)?

As with sympathetic portrayals of homosexuality, this effort is not about promoting tolerance of people. It’s about exploiting the concept of tolerance in order to expose children to the perverse sexual activities of adults in an effort to normalize such perversion.

Macy’s Thanksgiving Day parade also serves to inaugurate the Christmas season with an appearance by Santa Claus. Macy’s is willing to profit from the day set aside to celebrate the birth of Christ, while blaspheming God and insulting the beliefs of those whose hard-earned money they want. The hard-earned money of Christians is being used by Macy’s to normalize gender confusion and cross-dressing and to insult our God — who will not be mocked.

This is bad business and bad policy on the part of Macy’s. They are pushing mature adult conversations about psychological and moral issues on families at a time when families want to focus on celebrating Thanksgiving and the advent of the Christmas season.

Take ACTION:  Please click HERE to send an email or a fax to Macy’s President and CEO Terry J. Lundgren.  Let him know what you think of their decision to include a Kinky Boots performance in the Thanksgiving Day parade, then shop elsewhere.  You can also call their customer relations number at (513) 570-7000.

It’s always offensive to push corrosive social and sexual agendas on children, but doing so during celebrations of religious holidays may be most offensive time of all.

From now until the end of the year your tax-deductible gift to Illinois Family Institute will be doubled, up to $25,000 due to the generosity of some long-time supporters.

Click here to double your tax-deductible donation to IFI today!

Warping Children’s Hearts and Minds
b
a
x
r