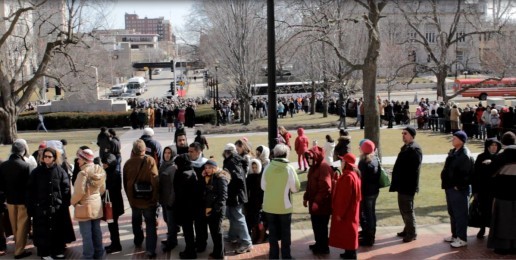 William Wilberforce said, “Accustom yourself to look first to the dreadful consequences of failure; then fix your eye on the glorious prize which is before you; and when your strength begins to fail, and your spirits are well nigh exhausted, let the animating view rekindle your resolution, and call forth in renewed vigour the fainting energies of your soul.”

The glorious prize for countless Illinoisans right now is the preservation of the single most important social institution: natural marriage. They understand the dreadful consequences of failure, and yesterday in a remarkable demonstration, Illinoisans, numbering in the thousands, sacrificed their time, labor, and comfort to defend it.

Yesterday in Springfield—in 19° weather—hope animated the men, women, and children as they arrived, busload by busload, car by car, from every corner of the state to express their opposition to the removal of sexual complementarity from the legal definition of marriage.

Despite the indoctrination that pervades academia, the bias that dominates the mainstream media, the flood of Hollywood images that glamorize homosexuality, and the increasing vilification of those who dare to dissent from “progressivism,” scores of Illinoisans remain resolute in their defense of marriage.

All those unable to be in Springfield but who recognize that children have a right to a mother and a father, who treasure religious liberty, who understand that the government does not construct marriage, and who rightfully fear the consequences of the government’s refusal to recognize what marriage is owe a debt of gratitude to the thousands who stood for truth in the public square today.

Now that lawmakers have seen and heard that Illinoisans care deeply about natural marriage, let’s hope they have the wisdom and integrity to protect it.