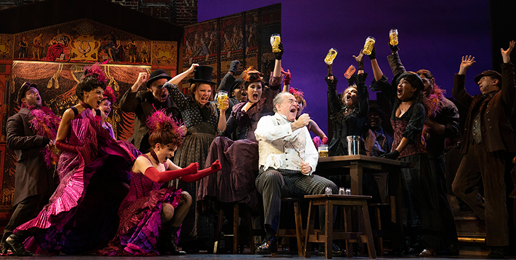 The John F. Kennedy Center for the Performing Arts in Washington D.C. has a special holiday treat for the kiddies this year: My Fair Lady. Austin Ruse, President of the Center for Family & Human Rights, and his wife Cathy Ruse, Senior Fellow for Legal Studies at the Family Research Council, took their 14- and 11-year-old daughters to see it, and here is an excerpt from his review  published in the Washington Examiner:

Act 2, Scene 4: Alfred P. Doolittle is about to get married. … And what do we see …? Men dressed as can-can dancers singing and dancing to Alfred P. Doolittle’s joyous swansong Get Me to the Church on Time. It appeared that Drag Queen Story Hour had come to the Kennedy Center. …

At one point, the “bride,” whose low-cut wedding dress repeatedly falls down to expose “breasts,” jumps on the top of a piano and leans back while another man exaggeratedly fondles his “breasts.” Then the “bride” spreads his legs in the air while another man pumps his face into the “bride’s” crotch, quite obviously simulating oral sex. This in front of my daughters and every other child unlucky enough to be there.

But there is more. The “bride” jumps down, dances across the stage, and bends over while Alfred P. Doolittle lifts his dress and simulates sex “doggy-style” for the gentle audience.

At the end of his number, there was rousing applause.

Nothing like simulated oral sex between a cross-dressing man and another man to celebrate the holidays.

Before the perverse, anti-family creepers got their grimy mitts on it, My Fair Lady was a family-friendly affair, but every inch of the public square must be sullied before the deviant among us are sated.

The inclusion of scenes of sexuality in plays that historically might have only alluded to sexuality is not new. Ten years ago, Chicago Shakespeare Theatre’s production of Macbeth included these scenes:

Despite what “progressives” claim, objections to vulgarity like this do not constitute provincial philistinism, and the performances of actresses who perform nude or topless are not “brave” performances. Except for exhibitionists, it takes nerve to exhibit publicly those parts of the human anatomy that are sexual or excretory in nature, but the nerve needed to entertain a theater audience through nudity is different from the bravery needed to risk suffering or death in the service of a noble cause.

The actress, Karen Aldridge, was degraded and objectified. Her exhibition of her body and her willingness to be publicly fondled was disgraceful and distracting. It added nothing of value to our understanding of Macbeth and pulled audience attention out of the story.

If it is brave and justifiable to publicly exhibit and exploit one’s body, then we should stop telling our children that the parts of their anatomy that are inherently sexual are “private parts.”

For an actress to be willing to bare her breasts in front of hundreds of strangers night after night and allow a man who is not her husband to fondle them suggests a heretical Gnostic view of the human person—a view that separates the physical body from the internal “spiritual” self. This is a troubling and false dualistic view of the human person, which denies the reality that our physical, material bodies are inseparable from our immaterial spiritual selves and are sacred.

Despite what many within our “artistic” communities may claim, “art,” or rather some contemporary misconception of art, is not an ultimate value. It does not transcend or supersede the objective truth that our naked bodies are not for public display or public consumption.

After IFI posted a short warning about the play, we received this email from a woman who objected to my objections:

Your evaluation of Macbeth made me chuckle. I am going to see the production tonight. My daughter, who works at the theatre, has seen it and was quite impressed with the production. I will reserve my comments to you until after I have seen it. However, I must be upfront and tell you I have little, if any, respect for your organization, so, naturally, your opinion is of no importance. However, I did want to share with you this funny (sad?) anecdote. One parent that came into the theatre worried about the sexual overtones of the show was quite accepting of the violence. No problem there! We can maim people, carry guns, annihilate anyone with whom we disagree, but show people having sex???? Blasphemy!! What a mixed-up set of values …

I’m not sure she knew what an “overtone” is. An overtone is “a subtle or elusive quality or implication.” There was nothing remotely subtle in the sexuality depicted in the Macbeth production. If the sexuality had been subtle, elusive, or implied, I wouldn’t have objected.

Her comparison of depictions of violence to actual nudity is flawed. Even a comparison of depictions of violence to depictions of sex acts is flawed. Many people, perhaps most, believe that sexual acts (and excretory acts) though perfectly normal are intimate, private acts that are not for public consumption. Violence is quite different. While violent acts are always unpleasant and often abhorrent or repugnant—even when necessary and justifiable—they are not thought of as intrinsically private, intimate acts.

Turning and turning in the widening gyre
The falcon cannot hear the falconer;
Things fall apart; the centre cannot hold;
Mere anarchy is loosed upon the world,
The blood-dimmed tide is loosed, and everywhere
The ceremony of innocence is drowned;
The best lack all conviction, while the worst
Are full of passionate intensity.

The Overturning of Roe v. Wade and the Possibility of Cultural Change