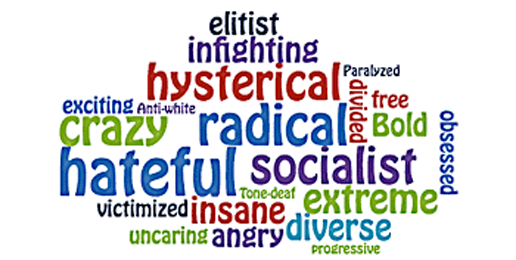 As we head into the next presidential campaign season, it would serve us well to remember how leftist hatred and the lies they created to serve their hatred have caused ordinary Americans to suffer.

Leftist hatred of former President Trump resulted in the election of the senile mob boss Joe “Bananas” Biden, who has destroyed virtually every good thing Trump did during his four years in the White House. (Ironically, leftists consumed by hatred hurl the epithet “hater” at anyone who holds different moral views than they do.)

With his ill-conceived COVID and economic policies, Bananas Biden destroyed a once- flourishing economy that helped communities of color. Democrats don’t really care about the welfare of those communities. Rather, they exploit those communities for votes. If they did care, they wouldn’t incentivize fatherlessness, celebrate single-sex family structures, and deny families school choice. If Democrats did care about families of color, they wouldn’t defund the police and release criminals who plunder communities already ravaged by crime and poverty.

While Trump presided over the historic Abraham Accords and foreign policies that kept bad actors in check, the feckless Biden emboldened tyrannical regimes.

Biden’s enthusiastic support for racist academic theories half-baked in Ivory Towers intensified racial division in America. Judge people by the color of their skin and their genitalia—especially if that genitalia is fake—say Biden and his collaborators. Normalizing racism and “trans” nonsense sits squarely at the top of Biden’s list of unprincipled convictions.

The anti-woman Biden embraced science-denying “trans” cultic beliefs, thereby robbing all citizens of their intrinsic right to privacy in shared private spaces, jeopardizing the safety of girls and women, and destroying women’s sports.

Biden opened wide the Southern border floodgates to law-breakers whom Bananas ships around the country under cover of darkness after giving them smart phones.

While Trump presided over the development and delivery of the COVID vaccine at lightning speed, Biden left his slimy, sluggish mark on the delivery of COVID-testing kits.

Worst of all, Biden the fake Catholic, dismantles every policy that protects preborn humans and supports any law that enables women to order the killing of their living offspring up until birth.

All of this harms ordinary citizens of every color, while the wealthy, powerful, and well-connected remain immune from the consequences of their corrosive decisions.

The achievements during Trump’s brief tenure were all the more remarkable in that he had to contend with Democrats in Congress who were determined to spend millions of taxpayer dollars to promote what they knew to be lies in order to unseat a duly elected president. That, in leftist la-la land is an ethically defensible way to refuse to accept the results of an election. Manufacturing a Russian collusion hoax involving FBI agents, wasting taxpayer money, and lying to judges to unseat a sitting president is the modus operandi of the proudly non-insurrectionist Democrat party

At the same time, Trump had to contend with relentless assaults by a shockingly partisan and hostile press more skilled at licking the muck boots of the DNC than at journalism. They will attack Republicans with a viciousness that only ethics-free bullies would engage in. This was a press so full of hatred and so petty that no women’s magazine invited the most beautiful First Lady in history to appear on its cover. Some might call that micro-aggressive.

Many on the left and a fair number of people on the right argue that Trump is a flawed man. No argument there. Who among us isn’t? Liar extraordinaire Adam Schiff? Nancy let-them-eat-cake- while-I-get-my-hair-done Pelosi? Hillary Clinton, whose list of ethical violations—including attacking the victims of her husband’s sexual predations—is too long to enumerate? Yet no mention of their corruption from the haters and liars on the left who concocted wild conspiracy theories and a web of lies involving powerful government agencies to—dare I say it—rig the election.

There are many ways to rig elections, at least three of which were at play in 2020:

Second, social media superhero Meta-Man, aka Mark Zuckerberg, and his wife poured millions—$419 million—of their own money, laundered through two non-profits to ensure Biden’s win. In other words, they surreptitiously plopped down their bars of gold onto the scales of equity.

And third, another social media mogul, the pixilated Jack Dorsey, banned from Twitter a major story about the laptop of the second-in-command of the Biden crime family, Hunter Biden. Other press outlets followed suit, thereby keeping information from voters about a real influence-peddling/collusion scheme involving the Bidens, Ukraine, and China.

So, as we enter the presidential campaign season, let’s not be deceived by lies, nor distracted by a quixotic quest for a perfect candidate. There will be none. Support candidates whose policies will result in conditions that allow free speech, religious liberty, and human life to flourish. Reject candidates whose party seeks to constrain speech; undermine religious liberty; indoctrinate children; kill humans in the womb; foment racism; endanger the safety of girls and women; subordinate human needs to the desires of climate hysterics; facilitate border lawlessness and criminality in our cites; and render America less safe from enemies foreign and domestic.