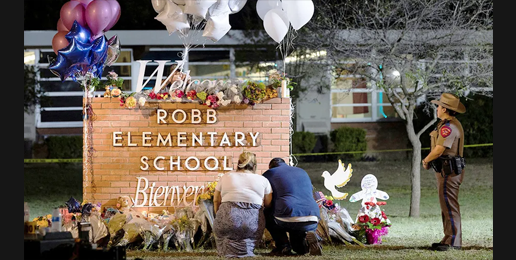 On May 24, 2022, Salvadore Ramos tore families, a community, and the nation apart when he slaughtered 19 children and two teachers after shooting his grandmother in the face in Uvalde, Texas. Like so many other mass killers and other violent criminals, Salvadore came from a broken, dysfunctional family. His father, who didn’t see his son often and lives with a woman to whom he is not married, “has a lengthy criminal record which includes at least one conviction for assault and causing bodily injury to a family member.”

Ramos had a troubled relationship with his mother who lives with a man to whom she is not married. Ramos had been living with his grandparents.

With each horrific mass killing, “progressives” preach against guns. Again and again, when a man mows down innocent people, liberals put gun-ownership in their sights, which is like looking at the problem of teens who cut themselves and angrily proclaiming that the problem is easy access to razor blades. Women have access to guns too. If guns were the problem, then why are almost no mass killers women?

Of course, gun control and the left’s obsession with killing the Second Amendment by a thousand regulatory cuts are political issues, but if the Left genuinely cared about protecting society from gun violence, they would look beyond the cheap, superficial, but good-for-rallying the troops issue of gun control. They would look at the deeper issue of family dysfunction that likely contributes in many cases to mass killings and most certainly contributes to gang violence that plagues all large American cities.

All children are harmed by family breakdown and dysfunction, but because boys and girls are by nature different, they are affected differently. Some second wave feminists and virtually the entire “trans” cult have contaminated the developed world with the lie that men and women are ontologically identical and interchangeable. They’re not and that’s why mass killers are exclusively male.

Boys are not worse humans than girls. They are different and, therefore, cultural forces affect them differently. Properly raised, men are heroic defenders and protectors of women and children. Improperly raised, some will become the predators against whom our heroes valiantly, heroically, and sacrificially fight.

Here is a list of some American mass killers. Please note that not all of them used guns:

Andrew Kehoe killed 38 elementary school children, 2 teachers, 4 other adults, and wounded 58 in Bath Township, Michigan in 1927. Kehoe used explosives. His mother died when he was 5. His father remarried, and Kehoe had a poor relationship with his stepmother.

Howard Unruh killed 13 in Camden, New Jersey in 1941. His parents separated when he was 9, and he was raised by only his mother.

Richard Speck killed 8 nursing students in Chicago in 1966. He used a knife. Speck was close to his father who died when Speck was 6. His mother remarried a few years later. Speck’s stepfather was an emotionally abusive alcoholic with a criminal record.

Charles Whitman killed 16 people at the University of Texas in Austin in 1966. His father emotionally and physically abused Whitman and his mother.

James Ruppert killed 11 family members in 1975 in Hamilton, Ohio. His mother told him she had wanted a girl. His father had a “violent temper and no affection” for James or his older brother Leonard. His father died when James was 12. His 14-year-old brother assumed the role of patriarch and bullied James.

James Huberty killed 21 and wounded 19 at a McDonald’s in San Diego in 1984. His mother abandoned the family when he was about 10.

George Hennard killed 23 and wounded 27 at a Luby’s restaurant in Killeen, Texas in 1991. Hennard’s childhood was turbulent and unstable as was his parents’ marriage.

James Pough killed 9 and wounded 4 in 1990 in Jacksonville, Florida. His father left Pough and his eight younger siblings when Pough was 11.

Timothy McVeigh killed 168 and injured 600 in Oklahoma City, Oklahoma in 1995. He used explosives. His mother walked out on the family when he was 10. He was raised by his father who worked nights. The children rarely saw their mother.

Michael McLendon killed 10 in Alabama in 2009 beginning with his mother. He was reportedly “upset with his family ever since his parents divorced.”

Adam Lanza killed 20 elementary school children, 6 staff members, and his mother in Newton, Connecticut in 2012. His parents separated when he was 16 and divorced when he was 17, after which his father remarried and started a new family.

Wade Michael Page killed 6 and wounded 4 at a Sikh temple in Oak Creek, Wisconsin in 2012. Page’s parents divorced when he was young. His father remarried when Page was 10. His mother died when he was 13. Reportedly, Page did not get along with his father, and at some point in his school years, his father and stepmother moved out of state, leaving him to split his time between his aunt and his grandmother.

Patrick Crusius slaughtered 22, wounded more than 20, and traumatized countless others at a Walmart in 2019 in El Paso, Texas. His father wrote a memoir in 2014 detailing his 40 years of alcohol and drug abuse that resulted in two divorces, including from his second wife—Patrick’s mother—when Patrick was 12 years-old.

Dylann Roof killed 9 in a Charleston, South Carolina church in 2015. Roof was raised in an unstable family in which his father verbally and physically abused his stepmother.

Chris Harper-Mercer killed 10 and wounded 9 in Roseburg, Oregon in 2015. His parents separated when he was less than 1 year old.

Stephen Paddock killed 58 and injured 851 in Las Vegas, Nevada in 2017. His father Benjamin was a career criminal who was imprisoned from the time of Stephen Paddock’s birth to age 3 and from age 8-13.

Nikolas Cruz killed 17 students and staff and wounded 17 more at Marjorie Stoneman Douglas High School in Parkland, Florida in 2018. He was born to a drug addicted mother and was adopted at birth by an older couple. When he was five, he witnessed his father’s heart attack and death, and then a year before his rampage, his adopted mother died.

Economic frustrations may be a contributing factor for those whose psychological and emotional needs were not met as children, thus leaving them unable to cope with life’s obstacles. But the ultimate cause is likely something deeper, more profound than fiscal insecurity.

But could family dysfunction lead boys to embrace ugly ideologies? Could family breakdown contribute to their impulse to do violence? Might an intact family structure help prevent such desires in children who have other conditions that put them at risk for anti-social behavior? Is there not sufficient evidence to justify the inclusion of family breakdown as a possible contributing factor in news stories about mass killings? Is there not sufficient evidence that family breakdown may contribute to mass killings to justify studies of its potential causal effect?

In 2012, I watched hours of coverage of the horrific Sandy Hook school shooting in Connecticut. I was dumbfounded that in all the discussions of possible contributing factors, I didn’t hear one “expert” suggest that perhaps Adam Lanza’s parents’ marital discord and subsequent divorce, his father’s remarriage, and the absence of his father may have affected the mind and heart of the deeply disturbed Adam Lanza.

His older brother left for college when Adam was 14, a period during which his parents’ marriage was unraveling. One report said that these experiences were very difficult for Adam, although they were not identified as possible contributing factors to his acts of violence.

Then in 2008 when Adam was 16, his father left, his mother filed for divorce (which became final in 2009), and shortly thereafter, his father remarried. News media reported that Adam had had no contact with either his brother or father since 2010.

How might such losses have affected a boy who struggled with social interaction and had virtually no friends? What message did it send to a troubled child when his father moved out and started a new family in another town? How did it affect this isolated young man to have lost the only two intimate male figures in his life?

And how might things have turned out if his father and mother had been deeply committed to their marriage and his father deeply committed to Adam? Maybe nothing would have turned out differently, but along with discussions of gun laws, mental health services, school security, social media, violent films, and video games, perhaps we should talk about divorce, loss, and the importance of fathers in the lives of their children.  I am not suggesting that divorce always causes violence. Clearly, it doesn’t. Similarly, it’s clear that social media, violent films, and video games don’t always cause violence, and yet we’re including them in discussions of possible contributing factors.

Rather, I’m suggesting that we as a culture should include divorce and all its pernicious consequences in our discussions of factors that may have contributed to the transformation of a troubled young man into a mass murderer. It seems at least possible that marital discord, divorce, loss, and feelings of abandonment could be contributive factors.

I suspect there are myriad disincentives for Americans–including Christians–who have selfishly indulged in unjustifiable divorce for decades to look honestly at the emotional havoc they have wreaked on their own children. But unless we can say with absolute certainty that divorce and absent parents contribute nothing to intense feelings of hopelessness, sorrow, loneliness, and anger that could play a role in triggering violent acts by troubled young men, we must have this conversation.