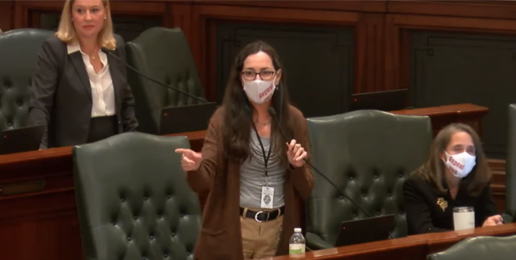 The euphemistically titled “Youth Health and Safety Act” (HB 370) has passed both the Illinois House and Senate. Leftists who believe it takes a village to strip parents of their natural rights and strip preborn humans of their right to live are close to fulfilling their promise to make Illinois America’s bloodiest killing field.  HB 370 will repeal the Parental Notice of Abortion Act passed in 1995, which requires parents of pregnant minor girls to be notified at least 48 hours before girls can have their babies killed.

In yet another repugnant floor debate in Springfield, State Representative Anna Moeller (D-Elgin) asserted without proving that there is a “fundamental principle that everyone has the right to make their own reproductive healthcare decisions without interference.”

Translated, she means there exists an unfettered right for pregnant underage girls to have their babies slaughtered without their parents being notified. Let’s remember, girls as young as eight can become pregnant.

As you read through some of the statements made by Moeller, State Rep. Daniel Didech (D-Buffalo Grove), and State Rep. Kelly Cassidy (D-Chicago), take note of what they say about the human in the womb that they are so eager to have slaughtered (hint: they say nothing).

Moeller and Cassidy faux-fretted about children in abusive homes. But their faux-fretting required rationalizing why the “judicial bypass of notification,” which was designed to protect such children, is inadequate. This is the rationalization Didech concocted:

Right now, we force those girls to navigate a complex judicial bureaucracy, maybe hire a lawyer and convince a judge that she is telling the truth that forcing her to involve her parents will put her in danger. I think we should handle it differently. I think when a girl tells us that she’s in danger, we should just believe her.

Didech is alluding to the “judicial bypass of notification” for girls who may come from abusive homes. But, rather than forcing girls to “navigate a complex judicial bureaucracy” and “maybe” forcing her to hire a lawyer, the ACLU makes it easy-peasy and free for girls to obtain a judicial bypass/waiver via its Illinois Judicial Bypass Coordination Project.

I can’t help but wonder how many teens Didech has been around when he says, “when a girl tells us that she’s in danger, we should just believe her.” First, that’s why we have a judicial bypass. Second, someone should tell Didech that many teens lie—a lot.

Here’s something else little discussed by human slaughter cheerleaders. The Parental Notice of Abortion Act allows both the judicial bypass and an exception to the bypass:

Notice shall not be required under this Act if the minor declares in writing that she is a victim of sexual abuse, neglect, or physical abuse by an adult family member as defined in this Act. The attending physician must certify in the patient’s medical record that he or she has received the written declaration of abuse or neglect.

How does Didech know with such certainty that after the repeal of the PNA “over 85% of girls will still involve their parents?”

Here’s the doozy of a statement about the process of obtaining a judicial bypass that Moeller made:

Since then, over 500 young women have been forced to endure a traumatizing judicial bypass process in order to access reproductive healthcare in Illinois. And we know that that that process creates an unfair and dangerous burden on these young women.

What exactly does Moeller mean by “traumatized,” and what is her evidence that over 500 young women were “traumatized” by the process?

What is “unfair” about providing girls from abusive homes the option of obtaining a judicial bypass? Is it “unfair” because girls from non-abusive homes are able to tell their parents? If that’s what Moeller means, then is it “unfair” or unfortunate that some children have dysfunctional families? Maybe Moeller doesn’t know the meaning of “fair.”

The judicial bypass is a just and compassionate means to protect minor girls from potential abuse in the home and from being abused by men outside the home. As State Rep. Chris Bos (R-Lake Zurich), who opposes the repeal of the Parental Notice of Abortion Act said,

If this passes, you will be allowing those who victimize and abuse children, not just here in Illinois, but from all over the US to walk their victims into a clinic, force them to have an abortion, hide the evidence of their crime and continue the cycle of violence. Do not further empower those pimps, those traffickers, those who rape sexually abused and exploit these children for their own personal and selfish gains.

Moeller made this patently false claim:

We support the most vulnerable in our state.

Is a 16-year-old girl for whom the ACLU will provide free judicial bypass services more vulnerable than the human in the womb whom the teen wants killed? Or is Moeller implying that the product of conception between two humans is not a human?

Cheerleader Cassidy reminded everyone of the unseemly late-night debate on Memorial Day weekend two years ago, when she was instrumental in passing Illinois’ Baby Snuff Bill that legalized abortion through all nine months of pregnancy for any or no reason:

I stood here in May of 2019 and had a lengthy debate, not unlike this, in which we described building a firewall around Illinois to protect reproductive healthcare and to protect access to this care. But that firewall has a gaping hole in it and it’s a gaping hole that puts our most vulnerable people, the folks that we are most charged with protecting, it puts them in danger. We have to plug that hole today by repealing PNA.

Cassidy’s word choices are curious. A firewall is a means to stop the spread of something bad. In Cassidy’s warped world, wholly unrestricted access to abortion for all minor girls is the good that her firewall protects. Anything that may influence or prevent a minor girl from killing her own child is the bad thing against which Cassidy wants to construct an impenetrable firewall. Nothing that may lead a child to choose life for her baby must be permitted in Cassidy’s dystopia.

A loophole is a means to avoid an obligation. Cassidy views parental notification as a “loophole”—a way for parents to evade their obligation to allow their daughter absolute autonomy to decide whether her child lives or dies.

For a moment, Cassidy inadvertently argued the conservative position:

Heard lots of folks over there talking about all of the things that you can’t do without contacting a parent, piercings and whatnot that, frankly, trivialize what we’re talking about here.

Cassidy didn’t seem to notice that when she claimed that comparing ear-piercing to abortion “trivializes” abortion, she was making the conservative argument. If an abortion—i.e., the intentional killing of a living human—is far more significant than getting ears pierced, and minors need a parent’s permission for an ear-piercing, then shouldn’t they be required to notify their parents before hiring a “doctor” to kill their offspring?

Kelly continues with her irrational argument–one made by Moeller as well:

[N]obody over there [on the right side of the aisle] wants to talk about the things you can do without contacting a parent. You can get pregnant, you can stay pregnant, you can give birth, you can have a C-section, you can give a child up for adoption, all without ever having anybody call your parent. Yep, minors are able to do all those things without parental notification, so let’s spend a moment thinking about those other things.

Staying pregnant: Absolutely. A minor girl can choose to “stay pregnant.” In other words, no one can legally force a human to have another human killed. That’s wildly different from allowing a minor daughter to undergo a surgical procedure that kills her child without her parents’ knowledge and counsel.

Giving birth or having a C-Section: These references are so idiotic they don’t deserve a response, but here goes. First, while continuing a pregnancy is volitional, giving birth is a non-volitional process. There are no points of correspondence between choosing to end the life of another human (aka abortion) and giving birth. Same goes with regard to C-sections. Obstetricians decide whether a C-section is necessary mode of delivery.

Cassidy accuses those who believe good parents of  minor girls should be notified before their daughters undergo an abortion of being liars:

Well, I’ll borrow Cassidy’s rhetoric. To say that the repeal of the Parental Notice of Abortion Act is about “healthcare,” that this is some high-minded protection of children’s “health” and “safety” is a flat out lie. It is a complete lie. It is a fiction. This repeal is about the legal “right” of some humans to order the killings of weaker, less developed, more vulnerable, or differently abled others.

Watch this video of a woman who was raped at 11, trafficked at 15, and forced to have abortions by her traffickers. See what she has to say about the Parental Notice of Abortion Act: