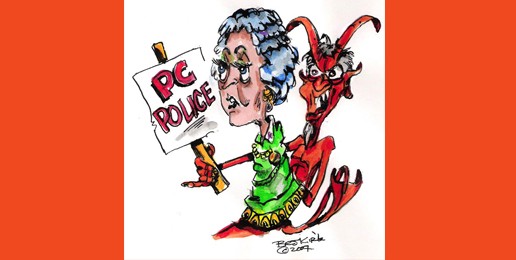 Weekly editorials complain about the violence of our streets, the failures of public schools, and the apparent hopelessness of American’s youth, but solutions are notably absent.  In fact, the lame suggestions offered, which I suppose are considered answers by those who offer them, address symptoms at best and rarely the underlying issues.

The reasons for the dearth of real answers lies in the fact that such answers are politically incorrect, and much of America trembles at the feet of the “political correct” police. Now, I have never seen one of these “police,” and I expect you have not either, but they wield incredible power over the thinking of Americans.  How tragic that in the “Land of the free and the home of the brave” multitudes remain paralyzed for fear of the “PC police.”

While many things contribute to the cultural problems we face, one eclipses all the rest in its importance, and that is the collapse of the traditional family.  This is not debatable.  The evidence is overwhelming.  And we must not be side-tracked by the critics who persistently parade out the “exceptions.”  Yes, some people fail at marriage and some people use marriage to hide vile behavior.  But, there is no substitute for a loving, intact family in the shaping of a well-rounded,  healthy child.  It is probable that we did too little in helping young people prepare for marriage during the 50’s assuming they understood more than they really did about building essential relationships.

But, it must be understood that it is people failing at marriage and not the institution itself, that is the cause of these woes, just as it was people who failed in their duties as leaders which brought on the current financial malaise, not America’s form of government or economic system.

But, all these crises find a primary solution in the restoration of the nuclear family. There is no better place to learn how to live than in a good home.  But, before we will see a resurgence of the family, we must address the question as to why it has fallen into disrepute in the first place.  The family is not perceived to be a viable answer to our cultural ills for several reasons.

I read a Girl Scout recruiting poster the other day and found it called girls to a myriad of great adventures, but nowhere advocated for preparing for motherhood!  I suggested to a high school principle a few years ago that to the list of opportunities the school high-lighted on “Career Day” he should add a session on motherhood.  He recoiled as if I suggested adding neo-Nazism and sputtered, “We could never do that!”  I used to think that fatherhood was the most disrespected vocation in America, but now realize the Left, especially as represented by radical feminism, detests motherhood with a passion that eclipses even their hatred for dads!

It is clear why the nuclear family is on life support in America and why we have so many intractable social problems.  The hot house in which vulnerable little ones are introduced to life is being broken down and destroyed.  The wringing of hands on the Left over hurting children is a sham.  If they really cared, they would quit their assault on the family and invest their energies on rebuilding and encouraging solid, healthy, traditional, two-parent families.

It may help to have a friendly village to raise a child, but the village does nothing compared to the family in bringing up healthy and happy young people!  And, in America’s case, our current village is openly hostile to children.

It would be best to avoid the village in raising children for the foreseeable future.