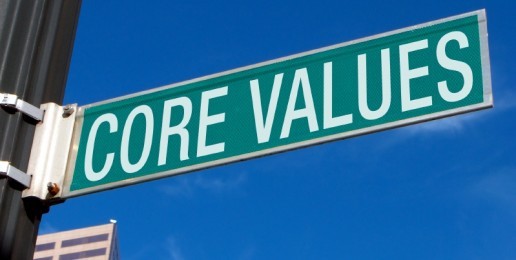 “Somewhere along the way, standing up for gay marriage went from nervy to trendy.” This was the assessment offered by Frank Bruni, an influential openly-gay columnist for The New York Times. Bruni’s column, published just as the Supreme Court was poised to hear oral arguments in the two same-sex marriage cases now before it, is a celebration of the fact that, as he sees it, same-sex marriage is soon to be the law of the land, whatever the Court may decide. “The trajectory is undeniable. The trend line is clear. And the choice before the justices is whether to be handmaidens of history, or whether to sit it out.”

Bruni may well be right, given the trajectory and the trend-line he has described. Of course, Bruni, along with his fellow columnists, editors, and reporters for The New York Times will, along with their friends in the larger world of elite media, bear much of the responsibility for this. They are certain that their work is the mission of human liberation from irrational prejudice.

In the most important section of Bruni’s column, he writes: “In an astonishingly brief period of time, this country has experienced a seismic shift in opinion — a profound social and political revolution — when it comes to gay and lesbian people.”

That is a powerful summary of what has happened. Bruni is undoubtedly right, and he has helped to make it so. But there is something missing from Bruni’s analysis, and this is something that he has helped to cause as well. The “seismic shift” on the issue of homosexuality is a profound moral revolution as well.

And yet, what makes this moral revolution so vast in consequences and importance is this: the moral dimension has virtually disappeared from the cultural conversation. This is true, we must note, even among the defenders of heterosexual marriage.

This is not to say that those who now defend the natural and venerable definition of marriage deny the existence of a moral argument, nor to imply that they are anything less than fully in agreement with the historic and scriptural assessment of the Christian church that homosexual acts and relationships are sinful. We must, however, note that the current intellectual environment has forced them to leave the moral issue behind — far behind.

Eric Teetsel, executive director of the Manhattan Declaration, also contributed a column just as the Supreme Court was to hear the same-sex marriage cases last week. Teetsel wrote in defense of marriage as the union of a man and a woman, arguing that society has an interest in defending the historic definition of the marital union as “the first institution of society” and “the society that creates and nurtures the next generation.”

The same approach is reflected in the very best book defending natural marriage from a natural law perspective. What is Marriage? by Sherif Girgis, Ryan T. Anderson, and Robert P. George is a brilliant defense of marriage and a tour de force in terms of intellectual argument. The book is actually an extension of an important article by the three authors that originally appeared in the Harvard Journal of Law and Public Policy.

In the book, the authors begin with this declaration: “What we have come to call the gay marriage debate is not directly about homosexuality, but about marriage.” That is a truly interesting statement, but it actually points to what these three authors want the argument to be about, not to what the larger culture thinks the argument is about.

Later, the authors make this statement about their argument in defense of marriage. “First, it is not in the end about homosexuality. We do not address the morality of homosexual acts or their heterosexual counterparts. We will show that one can defend the conjugal view of marriage while bracketing this moral question and that the conjugal view can be wholeheartedly embraced without denigrating same-sex attracted people, or ignoring their needs, or assuming that their desires should change.”

The brilliance of this book lies in its careful distinction between two rival views of marriage — the conjugal view, which defines marriage as “a bodily as well as an emotional and spiritual bond” which sustains the world through the creation and nurture of children, and the revisionist view, which defines marriage as “a loving emotional bond, one distinguished by its intensity, with no reference to a duty beyond its partners. The conjugal view, based in the function of the family and the nurture of children, points to lifelong fidelity. The revisionist view points to a relationship based on emotional intensity in which the partners remain “as long as they find it.”

This argument is vitally important, even essential, to any conversation about marriage in our modern context, for it points far beyond the issue of same-sex marriage to the prior assaults on conjugal marriage brought by no-fault divorce and the replacement of personal responsibility with mere personal autonomy. Sadly, the revisionist view of marriage is embraced by millions of heterosexual couples, married and unmarried, but it is essential to the very idea of same-sex marriage.

The argument offered by Girgis, Anderson, and George will stand the test of time. It is the very best public argument yet presented from the defenders of marriage. And yet it brackets the question of the morality of homosexuality. The authors are not making a moral argument, presumably dependent upon a religious authority, but a natural law argument accessible to all by common reason.

And yet, their argument is not well received by the proponents of same-sex marriage and it remains to be seen if their argument will gain any traction in the larger culture. In any event, it is an argument stripped of explicit moral concern.

During the oral arguments before the Supreme Court, the attorneys defending Proposition 8 and the Defense of Marriage Act [DOMA] followed the same lines of argument, strictly avoiding any reference to a moral judgment against homosexuality or homosexual unions.

Why are these authors and attorneys so careful to excise the moral argument? They believe that it is necessary before the Supreme Court, and before the court of public opinion.

The Court’s oral arguments on the DOMA case made the risks of moral argument clear. Justice Elena Kagan, pressing Attorney Paul Clement, the lawyer defending DOMA, asked him if Congress had made a moral judgment in adopting the Defense of Marriage Act. She then read from a House of Representatives report, issued in advance of the vote on DOMA, in which a clear moral argument was made. That report included these sentences:

Keep in mind that both houses of Congress then approved the law by massive votes, and that the Act was then signed into law by President Bill Clinton. All parties knew, and publicly affirmed, that they were making a moral judgment.

But all that is now part of the problem, legally speaking. In his decision striking down California’s Proposition 8, U.S. District Judge Vaughn Walker argued: “The evidence shows conclusively that Proposition 8 enacts, without reason, a private moral view that same-sex couples are inferior to opposite-sex couples.” Judge Walker dismissed all moral judgment against homosexual conduct as a matter of merely private moral opinion, presumably drawn from religious sources.

Back in 2003, Justice Anthony Kennedy wrote the majority opinion in the landmark case, Lawrence v. Texas, that struck down all laws criminalizing homosexual acts. Kennedy argued that moral opposition to homosexuality was not a rational basis for the establishment of a law.

In response, Justice Antonin Scalia argued that Kennedy had just eliminated any legal barrier to same-sex marriage. “If moral disapprobation of homosexual conduct is ‘no legitimate state interest’ for purposes of proscribing that conduct … what justification could there possibly be for denying the benefits of marriage to homosexual couples exercising ‘the liberty protected by the Constitution?’”

Those words are now seen as deeply prophetic. The removal of moral disapproval from this legal context set the stage for the inevitable controversy we are now experiencing — and for the removal of morality from the public conversation. If anything, the court of public opinion, driven by those who control the media, entertainment, and the public conversation, is far ahead of the law courts in this respect.

But consider the implications of this bracketing of moral argument. What, other than morality, sustains any laws restricting human sexual behavior?

The legislative debate over the prohibition of polygamy after the Civil War was explicitly moral. Sociological analysis did not drive that movement, morality did. What about all the other laws that restrict sexual acts? Are they also to be cast down by this logic?

Moral judgment under girds the entire structure of laws and is necessary for the rational structure of any significant statute. The idea that our laws can stand independent of moral foundation is senseless. We do not think that driving under the influence of alcohol is simply risky, in terms of statistics. We believe that it is wrong, in terms of explicit moral judgment.

The point here is not to criticize those who, working within the confines of public reason and prevailing constrictions, do their best — and often brilliantly so — to defend marriage without moral judgment.

But we should note this change in the rules of public debate with more than a passing interest; for the implications of this moral revolution are more vast than anyone can yet foresee. At stake is not only the ability to express moral judgment about homosexuality, but about any sexual behavior. Further, this logic cannot be restricted to public debates about sexuality. This revolution goes far beyond marriage and sex.

Subjected to public ridicule on CNN’s “Piers Morgan Tonight,” Ryan T. Anderson did his best to argue the case for marriage, avoiding moral judgment on homosexuality. He was unconscionably mistreated and marginalized. In the course of the show Piers Morgan told Anderson, the William E. Simon Fellow at the Heritage Foundation, that he was in danger of being found on the wrong side of history. Anderson retorted: “There is no wrong side of history apart from what the truth is.”