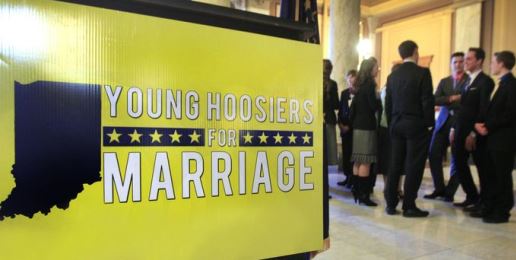 Are All Young People Deceived about Sexuality and Marriage?
Written By Laurie Higgins   |   03.04.14
PRINT

There is encouraging news to be found in the midst of what is most assuredly a culture darkening and coarsening as it moves away from Christ. It’s difficult to discern the encouraging news because our dominant news disseminators obscure it, but it’s there. Perhaps this glimmer of light is what Russell Moore calls the “prophetic voice” of the church whose contours are illuminated more brightly when the darkness threatens to engulf.

Here’s one of the glimmering tidbits of encouraging news: Former lesbian, atheist, and post-modern feminist professor Rosaria Butterfield spoke recently at a Wheaton College chapel service about her religious conversion and the subsequent (and ongoing) transformation of her life (She is now married with children). If that’s not encouraging enough, at the end of her testimony 2,000 college students gave her a standing ovation. That countercultural event should cause the most dispirited Christians to don their Ray-Bans.

Some Wheaton students who affirm anti-biblical beliefs about homosexuality staged a demonstration outside of the chapel service to protest Butterfield’s invitation. What warranted public notice, however, was not that some current or former Wheaton students who have drunk deeply from the slop trough of cultural relativism would abandon the teachings of Scripture, but that 2,000 young Christians who have been force-fed slop in their television shows, films, advertising, music, newspaper and magazine articles, and public schools would be able still to discern truth.

And perhaps you missed the news about the organization Young Hoosiers for Marriage who earlier this month traveled 100 strong to the Indiana Statehouse to oppose the legal recognition of same-sex unions as marriages. This fledgling organization is composed of college students and young adults “who are committed to rebuilding culture to ensure that children are not intentionally deprived of a mother and a father.”

According to a survey from Wilson Perkins Allen Opinion Research, these young Hoosiers are not alone. This survey showed that 54 percent of Hoosiers between the ages of 18 to 34 support a proposed Indiana amendment defining marriage as a sexually complementary union.

For conservative Baby Boomers and their elderly parents who find it uncomfortable to express their moral and political beliefs on matters related to homosexuality, imagine how difficult it is for Gen Xers and Millennials.

Baby Boomers who claim a Christian identity may have long ago proved their countercultural bona fides (or boneheadedness) in the service of free love, but they’ve done little to model countercultural courage in the service of truth about sexuality since then. Part of the reason is our own ignorance, part is selfishness (Christian Boomers seem to have little interest in looking honestly at their own acquiescence to or participation in the unbiblical divorce culture or the fornication culture), but the primary reason for our silence is cowardice.

We have modeled cowardly cultural conformity and thus helped create not just the sexual confusion and suffering such confusion entails, but also the oppressive climate our children and grandchildren will now inherit.

The encouraging news is some of our children and grandchildren will stand as watchmen on the walls.  Let’s come alongside them. We owe them that, and we owe Christ so much more.