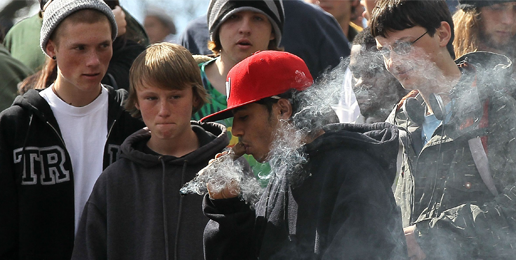 Released by the Illinois Association of Chiefs of Police

New data shows a troubling increase in teen-agers’ use of marijuana in Illinois, and a significant increase in vaping by teen-agers. Those are two major results from the second annual survey of School Resource Officers, who are police officers with primary responsibilities in schools throughout Illinois.

In October of this year, the Illinois Association of Chiefs of Police, the Illinois Sheriffs’ Association, the School Resource Officers Association and Illinois Partners/Educating Voices, conducted its second annual statewide multi-disciplinary study on the impact of marijuana on the health and safety of Illinois residents. More than 100 of the state’s School Resource Officers answered survey questions and recorded a variety of case examples of drug-related incidents that occurred in their schools.

“The recent increase of marijuana use in schools is very troubling,” said Jonathan Kaplan, President of the Illinois School Resource Officers Association. Kaplan is an SRO with the Belvidere Police Department. “Marijuana affects more than just a teen’s developing brain and health. Frequent use of the drug can have long-term effects on a teen’s life goals.”

The 2018 survey also indicated that of the 104 respondents, 75 reported handling at least one to five marijuana issues a month. With usage rates among teens steadily rising, some law enforcement officials believe the issue has worsened because of the laws regulated at the state level.  Illinois recently decriminalized possession of 10 grams of marijuana or less. With that, it is found that it has been increasingly difficult for adults to convince teens that marijuana use is dangerous.

According to a study that was done by the University of Michigan, teens were more likely to use marijuana or use a vaping device than they were to smoke cigarettes. Significantly, the Illinois coalition collected similar data in their second survey. The data shows that the recent trend found to be most alarming to officers, school staff and personnel is the uptick in vaping device use among teens.

Of the survey responses received, there was a significant increase in vaping device use reported by school resources officers compared to last year. Last year, five out of 53 officers reported vaping devices as major issues on their campuses compared to 22 out of 49 reported this year. Multiple officers replied that most of the marijuana incidents encountered have come from liquid  marijuana used in vaporizers.

“We have found that in many cases, students are now utilizing vaping devices as a vehicle for ingesting tetrahydrocannabinol (THC),” Kaplan said. “This trend is very concerning, as most “normal” varieties of liquid marijuana have upwards of 90% (or more) THC content, as opposed to THC content levels of 12-35% that are found in typical marijuana strains.”

Dr. Kirk Moberg, Executive Medical Director of UnityPoint Health Illinois Institute for Addiction Recovery, added: “This is especially concerning given the results of a recent study showing that vaporized THC resulted in higher blood levels of THC, greater cognitive impairment, and a more intense subjective drug experience than equal amounts of THC in smoked products.  The efficiency of this delivery system is worrisome as it increases the exposure of THC to our young people at a time when brain development is still in process and the risk of addiction is greatest.”

One School Resource Office wrote: “Students [were] caught using THC vape in bathroom. [The students were] searched by admin and found to be in possession of THC vape. Upon questioning and admin check of phone, one student admitted to selling cannabis, vapes and THC liquid to multiple students. This led to several other students being questioned and charged with possession of THC vape devices and THC oil inside of the school.”

As you may know, thanks to amazingly generous Illinois Family Institute partners, we have an end-of-year matching challenge of $100,000 to help support our ongoing work to educate and activate Illinois’ Christian community.

Please consider helping us reach this goal!  Your tax-deductible contribution will help us stand strong in 2019!  To make a credit card donation over the phone, please call the IFI office at (708) 781-9328.  You can also send a gift to: