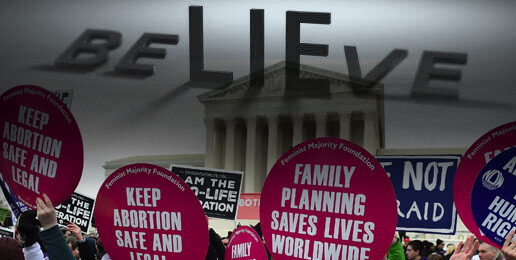 The fact that “progressives” in their opposition to constitutional textualists/originalists—whom leftists know approach the U.S. Constitution with more rigorous fidelity than do “progressive” Justices—focus almost exclusively on the possibility that Roe v. Wade may be overturned would seem a tacit admission that there exists no constitutional right of women to have their intrauterine offspring slaughtered. The infamous Roe v. Wade is on the chopping block, and leftists are more distraught over the possible decapitation of Roe than they are over the actual decapitations of tiny humans.

In their frenzied fear that human slaughter may be one day be illegal, leftists fume irrationally that the overturn of Roe threatens the constitutional right of stronger, more developed, and powerful humans (i.e., oppressors) to order the killings of weaker, imperfect, unwanted humans (i.e., the oppressed). Well, here’s some food for thought about Roe v. Wade from “progressives” who support the legal right of women to choose to have more vulnerable humans killed—quotes that shrieking feminists may find wholly unpalatable:

Roe v. Wade, my friends, is the SCOTUS decision that “progressives” argue absolute fidelity to precedent demands Justices uphold. If they think “lousy,” “indefensible,” “barely coherent,” unintelligible, a-constitutional non-reasoning must be honored in slavish service to the political end of allowing feticide, I hate to imagine what they would have thought about revisiting Dred Scott.