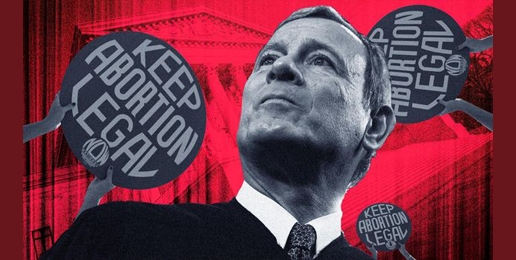 In June Medical Services v. Russo, U.S. Supreme Court Chief Justice John Roberts again disappoints conservatives. Roberts voted with the politically “progressive”/morally regressive majority to strike down a Louisiana law requiring abortionists to have hospital privileges within 30 miles of the slaughterhouses in which they kill tiny humans and occasionally end up killing or maiming their mothers. This law would have required abortuaries in which surgical procedures are performed to adhere to the same safety regulations as all other ambulatory surgical centers.

In his dissent, Justice Clarence Thomas made clear that the abortionists pursuing this lawsuit lacked “standing”:

Their sole claim before this Court is that Louisiana’s law violates the purported substantive due process right of a woman to abort her unborn child. But they concede that this right does not belong to them, and they seek to vindicate no private rights of their own. Under a proper understanding of Article III, these plaintiffs lack standing to invoke our jurisdiction.

Despite the fact that we granted Louisiana’s petition specifically to address whether “abortion providers [can] be presumed to have third-party standing to challenge health and safety regulations on behalf of their patients,” a majority of the Court all but ignores the question. The plurality and THE CHIEF JUSTICE ultimately cast aside this jurisdictional barrier to conclude that Louisiana’s law is unconstitutional under our precedents.

Attorneys represent litigants in lawsuits, and litigants must be able to claim that they are in some way harmed by a law. The purported harmful effect is what gives them “standing” to pursue a lawsuit. Since feticidal profiteers have trouble getting women to argue against abortionists having hospital privileges, this lawsuit was pursued by “third parties” who would be “harmed” monetarily by a law requiring abortionists to have hospital privileges.

The ability of abortionists to serve as third-party litigants was secured in the 1976 case Singleton v. Wulff in which two feticide providers sued for the right to have Medicaid reimburse them for killing humans in “not ‘medically indicated’” abortions. It was determined by the liberal court that the feticide providers had “standing” because, according to Justice Blackmun, “they will benefit by receiving payment for the abortions.”

“The point is, Ladies and Gentlemen, that greed, for lack of a better word, is good. Greed is right. Greed works,” says Gordon Gekko.

Justice Thomas goes on to remind America of the fundamental truth that Supreme Court precedents defending abortion lack even “a shred of support from the Constitution’s text”:

Our abortion precedents are grievously wrong and should be overruled.

He’s far from alone in his assessment of the precedents as “grievously wrong.” Here are some assessments of Roe v. Wade from liberals:

The super creepy pro-feticide organization Personal PAC, whose sole reason for its creepy existence is to protect the legal right of women to have their own offspring offed, is expressing only tepid kudos for this decision. Their enthusiasm is tempered by their correct assumption that pro-life activism will not cease:

While the Supreme Court’s decision in June Medical Services was a temporary reprieve from the assault on reproductive rights. … [d]on’t be fooled. … The anti-choice extremists are emboldened by today’s decision and it is to our great peril if we think it portends anything other than a reprieve by the Court Trump promised would end Roe.

“Choice” is an obvious and deceitful euphemism that is not up to the task for which it was created: it can’t conceal the truth about the unseemly nature of the choice leftists want women to have.

There exists no absolute or constitutional right “to choose.” Leftists exploit the word “choose” or “choice” because of its positive connotations. They exploit it because of the fondness everyone has for making choices in life. But not even leftists believe that a free-floating right “to choose” exists. There are a host of choices they want to proscribe:

So many choices of which tyrannical leftists want to deprive Americans. Well, many Americans don’t believe women have a moral or constitutional right to order the killing of imperfect or inconvenient humans.

Anything that gnaws around the edges of the child-killing cultural tumor that we refer to as Roe v. Wade is a good thing. Chief Justice Roberts didn’t help babies, women, or America.

What Truth-Telling Liberals Say About Roe v. Wade
b
a
x
r