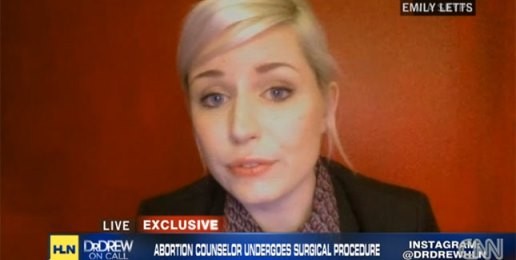 Emily Letts is a 25-year-old abortion counselor at the Cherry Hill Women’s Center in New Jersey whose video has gone viral. These days, videos go viral on a daily basis, and most are soon forgotten. But not this one. Emily Letts decided to make a video about her own abortion, and the result is one of the most disturbing video messages ever presented to public view.

“I feel super good about having an abortion,” Letts told Philadelphia Magazine. “Women and men have been thirsting for something like this. You don’t have to feel guilty.”

Her video follows her through her first-trimester abortion, undertaken at the clinic where she counsels other women. About a year after she began working at the women’s center, she found herself pregnant. As she told her story in Cosmopolitan, “Once I caught my breath, I knew immediately I was going to have an abortion. I knew I wasn’t ready to take care of a child.”

She was, however, ready to produce a video about her own abortion. “I searched the Internet, and I couldn’t find a video of an actual surgical procedure in the clinic that focused on the woman’s experience,” she wrote. “We talk about abortion so much and yet no one really knows what it actually looks like. A first trimester abortion takes three to five minutes.”

She chose a surgical abortion, rather than an abortion by pill, just in order to be able to tell the story. “I could have taken the pill, but I wanted to do the one that women were most afraid of. I wanted to show it wasn’t scary — and that there is such a thing as a positive abortion story,” she recounted. “It’s my story.”

So Emily Letts set out to make a video of her own abortion in order to create “a positive abortion story” that would show the world that women seeking an abortion should feel no guilt. Over and over again, she suggests that she feels absolutely no guilt about terminating the life within her.

And make no mistake — guilt is her major focus. In her words: “I know there are women who feel great remorse. I have seen the tears. Grieving is an important part of a woman’s process, but what I really wanted to address in my video is guilt.”

Actually, what she wants to address is her argument that the guilt women feel in having an abortion is simply imposed upon them by society. “Our society breeds this guilt. We inhale it from all directions,” she asserted. “I didn’t feel bad,” she insists. Her purpose in her video is to eradicate the link between abortion and guilt. “I am thankful that I can share my story and inspire other women to stop the guilt.”

She is unlikely to be successful in that aim, and her article in Cosmopolitan about the video makes that point. “Even women who come to the clinic completely solid in their decision to have an abortion say they feel guilty for not feeling guilty,” she acknowledged. “Even though they know 110 percent that this is the best decision for them, they pressure themselves to feel bad about it.”

Our post-Christian society has been working hard for well over a century to bury guilt in the cultural backyard and deny that guilt can be morally significant. In the wake of Sigmund Freud and the therapeutic revolution, the modern secular worldview demands that guilt be understood as the lingering residue of the Christian conscience, an experience merely forced upon us by a society that imposes oppressive moral judgments. It is to be overcome and denied, never heard.

But the Christian worldview affirms that guilt is inescapably moral, and that our experience of guilt comes from the fact that we are made in God’s image as irreducibly moral creatures. We cannot not know of our guilt, which exists as God’s gift to drive us to the knowledge that we are sinners in need of a Savior.

If Emily Letts truly believes that there is no guilt rightly associated with abortion, she would not have to insist, over and over again, that she feels no guilt. When she tells of women who “feel guilty for not feeling guilty,” she testifies to the fact that they are moral creatures who cannot stopmaking moral judgments, especially about themselves, even when they insist there there is no moral judgment to be made. And this must be especially true when a woman has sought to terminate the unborn life within her.

And Emily Letts knows that the baby within her was a life. In an absolutely haunting narrative, she described her abortion in these terms:

“I knew the cameras were in the room during the procedure, but I forgot about them almost immediately. I was focused on staying positive and feeling the love from everyone in the room. I am so lucky that I knew everyone involved, and I was so supported. I remember breathing and humming through it like I was giving birth. I know that sounds weird, but to me, this was as birth-like as it could be. It will always be a special memory for me. I still have my sonogram, and if my apartment were to catch fire, it would be the first thing I’d grab.”

So her abortion was “as birth-like as it could be,” except for the fact that the entire procedure was intended to terminate the life so that the birth would never take place.

And her comments about her affection for the sonogram image of her baby? What moral sense can be made of a woman speaking her pride in the sonogram of a baby she would abort? She told Philadephia Magazine, “I have a special relationship with my ultrasound. People say it sounds weird, it’s my process. I realize it was potential life, and I love it in my own special way. I’m not glib and cavalier. I’m comfortable with my decisions.”

She actually states that she loves the baby she aborted (while filming the process) “in my own special way.” In a comment posted at Cosmopolitan, she said that she did not want to give birth to the baby and then allow someone else to adopt the child because if she ever gives birth to a baby, “I would need to be the main source of love and support for the child throughout its life.”

In the case of the child she aborted, that life was very short indeed.

Her most chilling words of all are those with which she ends her video:

“It is about a month and a half after the procedure. I feel like I talk to women all the time and of course everyone feels bad about this; everyone’s going to feel guilty. It’s a given how people should feel about this, that what they’re doing is wrong. I don’t feel like a bad person. I don’t feel sad. I feel in awe of the fact that I can make a baby. I can make a life. I knew that what I was going to do was right, ’cause it was right for me and no one else. I just want to share my story.”

Friedrich Nietzsche could not have said it more clearly. This is a statement of Promethean self-assertion. It is also a concise statement of an absolutely godless worldview. She feels “in awe of the fact that I can make a baby. I can make a life.”

That actually explains her worldview. She grants to herself the power to give life; to “make a life.” What she gives, she can destroy. Emily giveth, and Emily taketh away.

And she is also the creator of her own moral system of value and the judge of her own solitary moral universe — “I knew what I was going to do was right, ’cause it was right for me and no one else.” No one else matters.

According to Cosmopolitan, Emily Letts won “the Abortion Care Network’s Stigma Busting video competition” with her effort. They evidently believe that this video will help their cause.

“For too long, those who believe in abortion rights have been playing defense, hiding behind political locutions like ‘safe, legal and rare.’ The procedure itself may have come out of the back alleys, but the affirmative case for abortion, the necessary and positive impact it has had on millions of women’s lives who weren’t ready, able or desirous of having a child, has been in a shroud of shame. With her brave actions, Letts lifted it a bit.”

Oh yes, Emily Letts has lifted the “shroud of shame” a bit. And what she revealed is a reality about abortion that is undisguised evil. Those who strive and pray for the end of abortion should hope that this video is viewed and that her comments about it are read by millions. This video reveals the truth about abortion in a far more powerful way than its maker intended. She is, after all, the maker of a video — and not the maker of life.

The Sterilization of Abortion
b
a
x
r