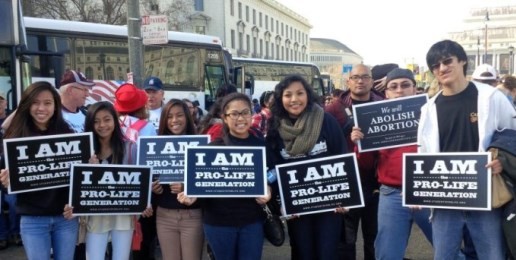 U.S. Representative Tim Ryan (D-OH) made national news last week when he changed his position on abortion from protecting the rights of the pre-born to dismissing those rights in favor of abortion.

Disturbed by the Congressman’s reasoning for his switch, high school and college students plan to visit his office in Washington, D.C. at 2pm today, Tuesday, February 3, to voice their concerns.

“Particularly troubling in Congressman Ryan’s op-ed was that he completely dismissed the humanity of the preborn baby,” said Kristan Hawkins, president of Students for Life of America. “By using familiar talking points from the abortion industry, the congressman refused to acknowledge why, in his words, ‘no one celebrates abortion.’ It’s because a life is taken, one that he didn’t even talk about in his op-ed.”

According to a recent Knights of Columbus/Marist survey, 59 percent of Millennials think abortion is morally wrong and 58 percent see abortion as doing more harm than good. When it comes to banning abortions after a certain point in pregnancy, National Journal reported that 52 percent of Millennials want abortions banned after 20 weeks. Rep. Ryan made no mention of his stance on limitations to abortion rights.

“We need to love both the mother and her preborn child, not pit them against each other,” said Hawkins. “Abortion is never the answer. We are working hard on our campuses to make them more pregnancy and parenting friendly. It starts with changing the culture and this generation, through their care for the mother and the baby, will be the ones to ultimately abolish abortion.”

Students will be traveling to visit U.S. Representative Ryan’s office from the Northern Virginia area.  If you’d like to contact him, you can call him at his Washington D.C. office at (202) 225-5261.

Prepare for the Wrath of the Pro-Abortion Militants

The Rape Exception
b
a
x
r