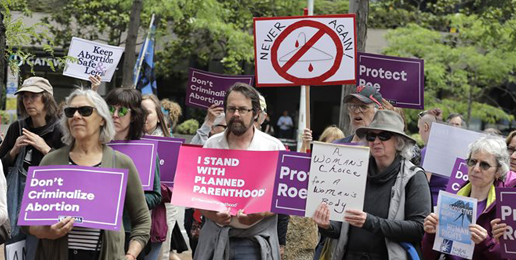 I recently tweeted, “Regardless of the charges against Justice Kavanaugh, this much is absolutely clear. The frenzied attempt to try to keep him out of the U.S. Supreme Court is simply a battle for the ‘right’ to abort babies in the womb. That’s the bottom line.”

Similar sentiments were expressed by Brandon Morse, writing on RedState.com: “The whole reason Supreme Court nominee Brett Kavanaugh is in the crosshairs of a sexual assault allegation, and a media circus is ensuing, is because the left is 100 percent focused on making sure their ability to abort children and profit from it goes uninterrupted. They can pretend it’s about honor and making sure an attempted rapist doesn’t get a seat on the highest court in the land, but the left cares very little about sexual assault or abuse.”

Is Justice Kavanaugh guilty of an attempted sexual assault 36 years ago? Is his accuser, Prof. Christine Blasey Ford, a credible witness? Those are totally separate questions.

The left’s opposition to Kavanaugh would be no less intense, no less angry, no less pitched had these charges never been raised. The real issue is abortion.

To quote Morse again, “This is about Planned Parenthood’s ability to keep the money wheel flowing for the Democrats. This is about keeping a narrative alive that without abortion, America would fall apart.”

Yes, “Democrats are so desperate to keep abortion alive and well in the United States that they’re willing to paint an innocent man as the worst kind of person so that they can continue killing children without trouble.”

All hell would break loose on the streets. Fierce protests would arise. Things would get ugly overnight – and by ugly, I mean very ugly.

A headline from July 12, 2013 on Townhall.com read, “Bricks and Tampons Intended to be Thrown at Pro-Life Lawmakers Confiscated by Police. UPDATE: Jars of Feces Too.”

The accompanying article, written by Katie Pavlich, stated that, “Apparently chanting ‘hail Satan,’ ‘f*ck the church,’ ‘bro-choice’ and holding signs that say ‘hoes before embryos’ just wasn’t enough for pro-abortion protestors in Texas. According to reports on the ground, police have confiscated bricks, tampons, pads and condoms protestors planned to throw at pro-life lawmakers.”

Fast forward to October 17, 2017, and a headline on LifeNews stated, “Topless Feminists Throw Firebombs, Tampons and Feces at a Catholic Church to Protest Abortion.” (This took place in Argentina.)

Are you seeing a pattern?

So, I ask again: What happens if Roe v. Wade gets overturned? What can we expect?

On May 1 of this year, Matthew Vadum reported that Antifa activists in California “protested a campus speech by Kristan Hawkins, president of Students for Life of America.”

As Vadum noted, according to the Orange County Antifa group Refuse Fascism, “Because Hawkins’ group would outlaw abortion, its members are equivalent to ‘Hitler-youth’ who want to treat women as ‘mere breeders or incubators, subordinate and shackled to a patriarchal order that sees them merely as objects.’ Pro-lifers are about ‘control over women, not saving lives (as evidenced by their bombings of clinics and outright murder of heroic doctors who provide abortions).’

Indeed, “Hawkins ‘and the whole fascist program against women and their rights’ need to be opposed and the ‘entire culture on campuses needs to be shaken up’ so students take on ‘the grave threat being posed by the Trump/Pence fascist regime.’”

You can be assured that these radical activists believe every word of this rhetoric, which could easily lead to violence. And I repeat: This kind of rhetoric is being used while Roe v. Wade remains the law of the land. Antifa activists and their ilk would go absolutely berserk if the laws were dramatically changed.

To be clear, I recognize that for many women, having an abortion is an intensely difficult moral choice. I’m thinking of a woman in her 20s, reared in a religious home, already raising two little children without a father. Her boyfriend takes advantage of her, she discovers she’s pregnant, and she is devastated by the news.

She cannot imagine adding one more child to her household, she struggles with depression and fear, finally deciding to abort her baby after four months.

Her decision was still morally wrong. But this woman is unlikely to join the “Shout Your Abortion” movement or, even less, to hurl feces at a church building.

Put another way, most of the women (and men) raging for the “right” to abort babies do so ideologically. Among them are devout feminists (although the pioneer feminists were reportedly anti-abortion). Among them are a large percentage of atheists. (According to a recent Pew Research report, 87 percent of atheists feel that abortion should be legal in all or most cases.)

Among them are LGBT activists, like those featured in this story describing, “How Queer Women and Nonbinary People Led the Fight to Secure Abortion Rights in Ireland.” (According to the congratulatory article, there is a clear “connection between LGBTQ+ rights and reproductive rights.”)

Among them are Satanists, like those who led a battle for “abortion rights” in Missouri. Yes, these Satanists claimed that the “rules in Missouri’s strict abortion law violate their religious beliefs.”

This is quite the coalition.

The bottom line is that, these examples, which provide just a sampling of the ideological opposition to the pro-life movement, remind us that hell hath no fury like that of the militant pro-abortionists.