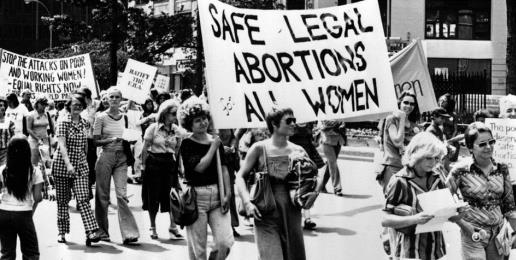 You may have heard some in the media say that the recent U.S. Supreme Court ruling on same-sex marriage has finally settled the divisive issue of marriage. The courts have now determined that both genders are no longer necessary in marriage.  That assumption is probably just wishful thinking on their part.

I have been teaching a worldview class this fall at a home school co-op.  In setting the table to discuss the life issue, I went back to look at the Roe v. Wade and Doe v. Bolton court decisions which forced abortion on America in 1973.

Here’s some confirmation of this.  On February 5, 1973, TIME magazine wrote an article called “A Stunning Approval for Abortion.”  They described how, in a 7-2 decision, the court expanded abortion in all 50 states.  They stated that even those that allowed abortion already would have to expand it.  They also noted how Justice Harry Blackmun, under a “right to privacy” he found in the 14th Amendment allowed abortion, and since a fetus was not human, it had no rights that trump this right of privacy.   (TIME totally missed the cruel irony of the 14th Amendment being an amendment intended to prohibit the return of slavery because the courts and many states had thought slaves were not humans with rights.  This is why a judge’s view of original intent is so important.)

TIME underplayed the opposition to abortion as a weak movement made up mostly of some religious conservatives and Catholic priests.  They also did the exact same thing that is being done today to the opponents of genderless marriage.  They compared the opposition to the Roe v. Wade ruling with those who opposed court rulings on racial desegregation, implying that pro-lifers were similar to racists of the 50’s and would fade away.

However, in their very last paragraph, TIME did concede that according to a poll taken right before the court ruling, the nation was split right down the middle on the abortion question.  Those supporting abortion in 1973 had a 1% lead. TIME noted that it was “a lightning rod for intense national debate.”

How did the U.S. Supreme Court do in settling that divisive social issue with a ruling finally deciding the legality of abortion?  The answer is – not very well.    Forty-one years later, Gallup polling reported that 48% of Americans oppose abortion calling themselves “pro-life” and 47% say that they are “pro-choice.”

Likewise, numerous polls have found that Americans were evenly split on the issue of marriage.  A national poll in April conducted by the Associated Press found that 50% said the U.S. Supreme Court should rule in favor of same-sex marriage, 48% said that is should not.   In July, two weeks after the ruling, the AP surveyed again to find that 41% opposed the ruling, while 39% supported it.

Pro-Life Americans Have the Opportunity of a Generation

Gallup: American Public is Pro-Life
b
a
x
r