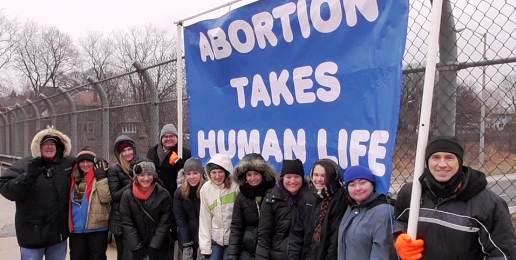 Some teens walked up to a group of pro-life advocates in Oak Park, Illinois recently. The pro-lifers were displaying  signs on a highway overpass.  Their signs said “Defund Planned Parenthood” and “Abortion Takes Human Life.”  The teens made it clear that they want abortion to remain legal.

Conversations about abortion do not take place with just strangers at pro-life events.  They take place with family, friends, classmates, and colleagues.  Abortion supporters have often heard pro-choice arguments from friends, news sources, and in academic settings but often they have not heard pro-life arguments.  While the previous article I wrote (here) outlines the basic pro-life case, this article provides responses to erroneous pro-choice objections one may encounter.

When sperm and egg meet at fertilization, a new human life is created.  That means abortion takes human life.  Embryology textbooks are clear that human life starts at fertilization, as you can read here.  Also, pregnancy websites refer to the unborn human as a baby in the earliest stages of pregnancy, including WebMD here.  Then there are those cases where a man attacks a pregnant woman and is charged with the rough equivalent of murder if the unborn human dies, regardless of how far along the mother was in pregnancy (here, here, and here).

Pro-choice Error #2: Unborn humans are not persons and therefore do not have rights.

“Person” is a legal and academic term referring to those humans who have basic rights. This pro-choice argument states that there is a class of humans who are not “persons” and therefore have no rights.  That class of humans is the unborn.

Often, abortion supporters will justify the denial of basic rights for the unborn by citing the unborn human’s lack of cognitive mental development.  However, they cannot explain, let alone prove, why cognitive development is a prerequisite for basic rights.

In addition, they don’t apply this principle consistently. For example, they don’t deny basic rights to people in a coma or with severe mental challenges.

A heavy moral burden falls on abortion supporters to prove that this group of humans–the unborn–may be discriminated against in the law.  Since it’s impossible to prove that the unborn are not persons, it seems more just, wise, and humane to treat them as if they are persons with a right not to be killed.

Abortion supporters may attempt to justify the denial of rights to unborn humans in the womb by claiming that no one knows when a human is entitled to basic rights.  However, that objection also fails.  Consider the scenario where a hunter sees something moving in the bushes, but doesn’t know if it’s a fellow hunter or a deer. Should he shoot?  Of course not.  Before shooting, the hunter must determine if the movement is caused by an animal or a person. The rule is, if you don’t know, don’t shoot. The hunter couldn’t justify shooting by saying he didn’t know what was in the bushes.  Similarly, it’s not enough for a pro-choice person to say “I don’t know” if the unborn is a person entitled to the right not to be killed.  They have a moral obligation to first prove that humans in the womb are not persons and therefore have no rights.

Pro-choice Error #3: The decision to kill humans in the womb is a private decision in which lawmakers have no business.

Abortion supporters assert that a woman’s choice to kill the human in her womb should involve only those she wants to consult (e.g., doctors, family members, or pastors) but not lawmakers. Should lawmakers be similarly prohibited from passing laws that make it illegal to kill newborn humans who are cognitively limited and cannot survive on their own? What if newborns have anomalies inconsistent with sustaining life? Should the choice to kill these humans be reserved for mothers and those they choose to consult? Bioethicist Peter Singer argues that there should be a 30-day post-birth window of opportunity during which parents should be free to have “defective” infants killed. For now, most Americans find such a belief abhorrent, but if abortion supporters believe Singer’s idea is abhorrent, it is incumbent on them to prove why birth grants rights to humans that they don’t possess while in the womb.

Pro-choice Error #4:  Laws on abortion should only be based on bodily autonomy rights.

Bodily autonomy is the idea that people have the right to do what they want with their body and that the law therefore should only restrict what can be done with one’s body if there is a compelling reason.  For instance, the law doesn’t require people to donate organs or otherwise use their body against their will to maintain someone else’s life.  Pro-choicers argue that using the law to require a pregnant woman to stay pregnant violates her right to bodily autonomy.  Often this is expressed in the slogan “my body, my choice.” However, that’s an erroneous argument because when an unborn human is created at fertilization, the biological parents also create that human’s biological dependency on the mother’s body.

At fertilization, two things are created.  First, an unborn human is created.  Second, the unborn human’s biological dependence on the mother’s body is created.  This second part is missed by pro-choice people. The question to be asked is, should it be legal to take a human’s life by first making them biologically dependent and then physically separating from them?

To attempt a justification for abortion using bodily autonomy rights, pro-choicers have to change their argument to account for the biological dependence created at fertilization.  They would have to argue for the untenable position that there is a legal right to take a human’s life by making them biologically dependent and then physically separating from them.  Consider a parent who attached themselves to their newborn with IV’s and injected a legal drug into their blood stream that made the newborn biologically dependent on them.  Next, the parent removed the IV’s, causing the newborn to die.  That parent would be charged with murder.  While the parent has bodily autonomy rights, that doesn’t justify using their body to take the newborn’s life.  Similarly, no one has the right to create a new human, making that human biologically dependent, and then physically separate that new human, so they die.

This is also true if the pregnancy resulted from rape.  Consider a situation where a pilot takes off in his small plane and then in mid-air realizes someone put a newborn on his plane.  When he took off, the baby became dependent on the plane for their life.  He didn’t intend to make the baby dependent, but that’s what occurred. He is not justified to evict the baby so that the baby falls to their death.  Similarly, the unborn human is also dependent on the mother’s body by virtue of the biological process that occurs at fertilization.  It would also not be justified to evict the baby from her womb so that they die.  The pilot can remove the baby once he lands and the mother can once the baby is viable.  In both cases, the baby is no longer dependent on the pilot or the mother for their life.

There are rare situations in which mothers have a condition, such as ectopic pregnancies, the treatment for which may or will result in the death of her preborn baby. In such cases, though treatment may result in the baby’s death, treatment is  justifiable because it doesn’t involve the intentional killing of a baby.

When a pro-choice person brings up the rape exception, it’s important to first acknowledge the horror of sexual assault.  It should be condemned in the strongest possible terms.  It’s equally important to point out the injustice of killing the human that results from the crime of rape. While the punishment meted out to rapists does not include death, abortion proponents find it justifiable to kill the human conceived in rape, thus making the baby the ultimate victim.

First, abortion advocates claim that pro-life laws will not reduce the number of abortions.  However, the National Bureau of Economic Research found in August 2012 (here) that if abortion were prohibited in 31 states, the national abortion rate would fall by 14.9%.  That would save over a hundred thousand unborn human lives each year.  If the unborn were protected from abortion in all 50 states, the number of lives saved would be even higher.

Second, abortion advocates claim a health crisis would result from prohibiting abortion.  Yet, in 1965 (prior to Roe v. Wade) there were only 200 deaths of women from illegal abortions according to the Guttmacher Institute (here).  Every death is a tragedy.  However, it’s a gross mischaracterization to call 200 accidental deaths from voluntary procedures a “health crisis.”  Consider that women die from legal abortions now.  If abortion were illegal, there would be fewer abortions, and that may lead to a reduction in deaths of women. Also, the number of deaths from illegal abortions would be far fewer today due to advances in medical science over the last 52 years. Moreover, if  200 accidental deaths from illegal abortion–a procedure women choose–constitutes a health crisis, what would we call the deaths of 900,000 humans who are intentionally killed in the womb each year in a procedure they did not choose?

Third, abortion advocates claim that pro-life laws will put huge numbers of women in jail for abortion.  The fact is, prior to Roe, abortionists were prosecuted, not the women who procured abortions.

The pro-life position doesn’t depend on moral or religious views.  The case for life can be stated just as sincerely and powerfully by an atheist or agnostic as it can by a person of faith.  The pro-life position is based on science which tells us that the product of conception between two humans is a new human. The obligation of all governments is to protect the rights of all humans, the most basic of which is the right to be protected from being killed.

Whether it’s a conversation with family, friends, classmates, or acquaintances, supporters of protection for the unborn can respond with clear and reasonable answers to pro-choice arguments. Science and truth are on the pro-life side.

IFI is partnering with pro-life advocates to put up pro-life billboards throughout the Chicago metro area with the simple and bold statement “Abortion Takes Human Life,“ but we need your financial partnership to make this a success.  Can you help with a tax-deductible donation to this campaign?