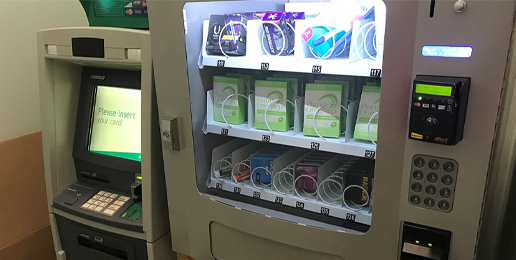 Regarding the Sale of Abortifacients in College Vending Machines
Written By Rev. Thorin Anderson   |   03.21.22
PRINT

Most Americans, when correctly informed regarding abortion, oppose it.  It has only been through deception that the abortion lobby has been able to keep abortion legal, but the tide is turning as technology has opened the womb before our eyes.  However, the proponents of abortion miss no opportunity to increase the number of victims and thus we are today faced with the Illinois Democrat led House attempting to hound the unborn to death even into the private spaces of state colleges and universities.  They are seeking to place abortifacients “in an area of campus where students can access the emergency contraception on weekends or after class hours,” making these drugs of death nearly ubiquitous to young college women.  The hatred of the Left for unborn children appears pathological.

While so-called “emergency contraceptives” are promoted as a means of preventing pregnancies, they also act to impede or prevent implantation of a fertilized ovum, should conception occur, thus making them abortifacients as well.

God, however, is avidly prolife.  In Psalm 127 we read that “children are a heritage from the Lord. . . . blessed is the man who has his quiver full of them.”  From the beginning of mankind’s existence we see God’s favor toward reproduction as He commanded Adam and Eve to “be fruitful and multiply; fill the earth. . . .”

For those who love life and children, it is difficult to understand the perspective of those who hate God Christianity and babies.  Just as we find ourselves enjoying what our loved ones enjoy, we also tend to hate the things our enemies favor. Because God loves life, His enemies hate it. Proverbs 8:36 notes that “all those who hate Me love death.” Life, and especially innocent children, apparently reflect God so brightly that the Left hates their very existence and targets them for death. The unborn are not collateral damage in the Left’s quest for equality or freedom, they are the target of a malignant hatred.

Therefore, anyone who loves God and life must oppose abortion and its related evils.

Abortion is evil because it is the taking of an innocent life, period. There is no rebuttal to the factual and scientific evidence that a new human being comes into existence at the moment of conception. Jerome LeJune, considered in his time a leading, if not the leading geneticist in the world, noted that he knew of no geneticist who would disagree with the statement that a new human life began at conception!

Thus, abortion is a scientific and spiritual abomination, but it has other significant moral and ethical implications. It trivializes life by promoting its destruction. It is not surprising that as abortion has become common, life itself at all ages has become less precious. What quantifiable difference is there between a life at 38 weeks after conception and 42 weeks after conception, or for that matter fifty years after conception? The reality of this is seen in the willingness of some leaders to allow the taking of the life of little babies in the hours following delivery, if the mother chooses.  The value of human life is becoming subjective, depending on the opinion of mere people.

Abortion trivializes relationships, as people disconnect sexual activity from childbearing and long-term relationships. It is abundantly clear that sex does not nor can stand alone as a mere bodily function. It is fraught with deep personal attachments, feelings, and emotions, which cannot be turned on or off at will. The real possibility and responsibility of parenting a child that once was a given with sexual activity has been weakened to the point that many young people believe that the two have little or nothing to do with each other; yet, contradicting the voices of the “experts,” sexually active young people do not find themselves liberated, but rather burdened by guilt, estrangement, loneliness, and long-term pain. A life of one-night-stands is neither satisfying nor fulfilling.

Additionally, these young people are finding that establishing long-term trusting relationships has become frustratingly elusive, and for some, impossible. Thus, the one relationship that is, next to a relationship with the Creator, most conducive to one’s long-term wellbeing is being avoided by millions of Americans, with the attendant disfunctions.

Human sexuality is tremendously complex, and while holding the potential of great pleasure, satisfaction, and strengthening a couple’s relationship, it is also fraught with peril. So, great idea here: let’s place abortifacients in vending machines right next to the Twinkies, popcorn, and Tootsie Rolls! That will certainly help facilitate young people’s understanding of the seriously life-altering reality of sexual activity, pregnancy, and abortion!

The fact is, America has created an incoherent common culture. On the one hand we will spend millions of dollars to save the life of one preemie, when the mother wants it. But at the same time, we kill millions of babies in the womb because they are inconvenient to mothers who don’t want them or have been convinced for the moment that a baby is not in their best interest.

There is no explanation for promoting such barbarity other than a deep-seated hatred for the unborn, which can only be attributed to a hatred for mankind in general. Anyone who can see the grisly reality of abortion without a visceral reaction reveals a callous antipathy toward the unborn and distain for women and motherhood.

As horrendous as abortion is one must ask why the urgency to promote it, as HB 4247 indicates? Moreover, why legislatively cap the price of these abortion pills to $40? The message delivered is that every pregnancy is a crisis of vast proportion.

And, putting drugs that can bring an end to a human life in every nook and cranny of our existence is safe, right?  (no irony there!) What could possibly go wrong?  Young women self-diagnosing, no doctors involved.  Nothing of concern here!

Then we look at America’s children. Yeah, I am referring to those who managed to survive the nation’s lethal attacks against children. How does abortion affect them, especially as we make the process as available as a candy bar? Make no mistake. Children are not so naïve as the Left would have us believe, and they are not as resilient as many suggest. The rising depression and suicide rates among America’s children did not happen in a vacuum. How can they not perceive that the nation has put a target on their backs? How can they not wonder whether they might be unwanted, too? Might they see themselves as expendable, just as the preborn are? Abortion providers can rationalize the slaughter all they want, but children are not sophisticated enough to manipulate facts so as to rationalize away the reality of babies dying all around them. Abortion is itself an abominable abuse, it is only made worse by the fact that the holocaust cannot be hidden from the eyes and hearts of the surviving children.

Finally, because abortion is evil, to force opponents to participate in it is an egregious violation of liberty and conscience. It is bad enough to hinder people from doing what they want to do, it is evil of a different class to force them to participate in an act they abhor, that of snuffing out the lives of innocent children.

Such wickedness must be opposed at all cost.

Take ACTION: Click HERE to contact your local state senator to let him/her know that you do not want your tax dollars used to subsidize emergency contraceptives on college campuses. Moreover, it is absolutely foolish to encourage risky sexual behavior in young people.

This bill passed out of the Illinois House on March 3rd by a vote of 62-38 with two voting present. If you agree with us that that HB 4247 is dangerous and threatens the well-being of our young people, please help us stop this bill in the Illinois Senate by contacting your state senator right away.