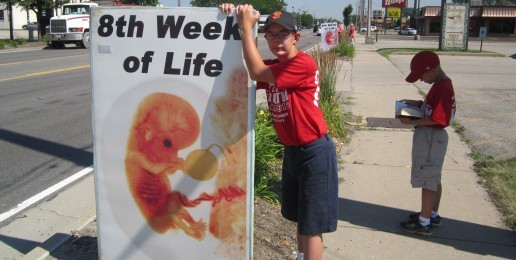 The Pro-Life Action League Face the Truth Tour 2012 kicked off Friday, July 7, in Joliet and Shorewood with pictures representing the nearly 4,000 children whose lives are legally terminated through abortion every day. With its 13th annual tour, organizers say they are “eager for participants to join us on the front lines showing our fellow citizens the truth about abortion.”

Face the Truth has spread across the nation since the League launched its first tour in 1999 in Wisconsin. Established under the inspiration of Pastor Matt Trewhella, pro-life activists across the nation have eagerly adopted this method of educating the public about the horror of abortion.

“We’ve had women come to us and thank us,” he explained. “With their abortions already scheduled, they saw our pictures and it changed their hearts.”

Scheidler said that is why the Pro-Life Action League continues to organize what he calls, “an important public education campaign.”

The Pro-Life Action League uses graphic pictures to get out its message. Some people express concern that the images may cause emotional harm to young children.

“We too wish it were possible for children to be shielded from the reality not only of abortion but of so many of life’s tragedies,” the Pro-Life Action League website states. “Many of us who hold these pictures first saw them as children. We found the pictures gruesome and saddening, but their only lasting effect was to impress us with a deep sense of the injustice of abortion.”

“The reality is that if people see the horrible truth of abortion it makes them uncomfortable and upset, and they are more likely to do something to try and prevent it,” said Scheidler.

Pro-life witnesses will line the roads at selected locations through the month of July, displaying pictures of healthy newborn babies juxtaposed with huge graphic photographs of aborted babies, visually exposing the tragedy of their tiny broken bodies.

See www.prolifeaction.org/truth/tours.php for a complete list of tour locations in Illinois and elsewhere in the U.S.