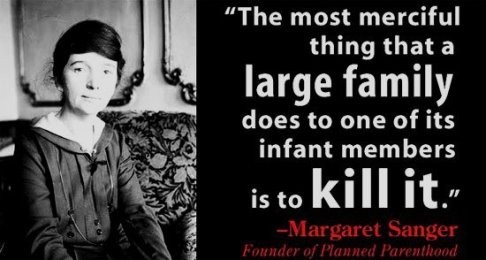 Humans have an astonishing capacity for embracing deception in the service of selfish and disordered desires. There is no more apt illustration of that truth than Planned Parenthood which has developed a ghastly organization that depends on deception to advance its gruesome practice of profiting from the tortured bodies of helpless babies.

As she lunches and munches, Nucatola explains that procurement firms want baby hearts, lungs, limbs, and livers, with “per specimen” payments of between “$30-100 depending on the facility and what’s involved.”

She provides a description of how Planned Parenthood professional hit doctors carefully crush baby bodies above and below the desired anatomical part so as to preserve it for maximum utility and monetary gain. Nucatola obscenely explains her method:

Profiteering doctors are ever so careful with baby bodies as they kill them.

In order to preserve babies’ heads during an abortion, doctors will flip babies around in utero to deliver them in the breech position, which, if the baby is still alive when the baby emerges, constitutes a violation of federal law. When Nucatola mentions the challenges of delivering babies’ heads, she’s careful to refer to them euphemistically as “calvarium.” “Progressives” depend on euphemisms to cover a multitude of evils.

The federal [partial-birth] abortion ban is a law, and laws are up to interpretation. So, if I say on day one that I do not intend to do this, what ultimately happens doesn’t matter. [emphasis added]

In health care, patients sometimes want to donate tissue to scientific research that can help lead to medical breakthroughs, treatments and cures for serious diseases. Women at Planned Parenthood who have abortions are no different. At several of our health centers, we help patients who want to donate tissue for scientific research, and we do this just like every other high-quality health care provider does — with full, appropriate consent from patients and under the highest ethical and legal standards. There is no financial benefit for tissue donation for either the patient or Planned Parenthood. In some instances, actual costs, such as the cost to transport tissue to leading research centers, are reimbursed, which is standard across the medical field.

First, it is illegal to sell or purchase “human fetal tissue.”

Second, it at least appears that selling and purchasing were being discussed—not donations.

Third, “other high-quality health care” providers do not intentionally kill healthy patients whose tissue is then “donated” for research.

Here’s what Breitbart explained back in January about Planned Parenthood’s funding: “In fiscal year 2013-2014, Planned Parenthood was provided with more than $528 million – or 41 percent of its total revenue – in taxpayer funds in the form of government grants, contracts, and Medicaid reimbursements.”

I wonder what the total revenue for the Center for Medical Progress is and if any of its revenue comes from government sources.

This appalling video may force the bloodstained merchants at Planned Feticide Federation of America to cease selling–I mean, donating–body parts of babies, but in a country awash in body and soul-destroying deception, they will likely be allowed to continue the murderous practice that makes body-snatching and selling possible. And let’s not forget in the justifiable outrage and heated discussions that are taking place that slaughtering babies is even more demonic than selling their dismembered parts.