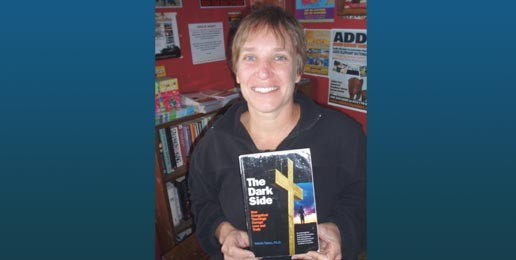 For those of us so very blessed to have raised our personal white flag in mankind’s inherently fruitless struggle against the Creator, there can be no joy in watching God-deniers continue to labor under the grandest of all deceptions. Regardless of how nasty they may be as individuals, there can be only sadness, genuine pity and prayer.

Still, it is instructive.

When the atheist gives voice to his or her God-denial, it provides those in Truth a small glimpse into the same dark spirit – old as Adam – that prompted the psalmist to observe: “The fool says in his heart, ‘There is no God.’ They are corrupt, their deeds are vile; there is no one who does good” (Psalm 14:1).

Valerie Tarico is one such God-denier. She’s on a fool’s errand. A steadfast disciple to the unholy trinity of “LGBTQ,” atheist and pro-abortion activism, Ms. Tarico proudly sits on the Board of Advocates for Planned Parenthood – America’s premier one-stop-death-shop.

For “progressives” like Tarico, the term “religious fundamentalism” is a euphemism for orthodox Christianity. In a tedious, though unintentionally funny screed recently published at Salon.com under the headline: “10 signs that religious fundamentalism is going down,” Ms. Tarico gives empty hope to her fellow hopeless with a word salad steeped in anti-Christian bigotry and wishful thinking. I share excerpts only because they so clearly encapsulate the broader secular-”progressive” mindset. Ms. Tarico’s reflections are so hyperbolic – so far removed from reality – that they require little additional commentary.

“[T]hings are looking bright for those who would like to see humanity more grounded in science and reason,” she begins. “If you are a nonbeliever in the mood for a party, here are 10 reasons to celebrate.”

She then rattles off a litany of tired claims the pagan left has repeated annually since the year 0001.

The nutshell? Atheism is on the rise, while Christianity is in decline. “Queer sexuality” is winning, while “biblical sexuality” is losing, yada, yada and so forth. (Total truth, of course, can be ignored, disobeyed, denied, temporarily repressed or masked, but it can never lose.)

“From Hollywood celebs like Cameron Diaz and Angelina Jolie to high school students, skeptics are opening up,” she caws, going on to sing the praises of fellow atheists like Alain de Botton, who “simply posits the nonexistence of God and then goes on to discuss what humanity can glean from the rubble of religious traditions.” (You know, Christian “rubble” like charity, hospitals, nursing, the Red Cross, the abolition of slavery, the civil rights movement, et. al.)

Ms. Tarico then throws out a few earthshaking discoveries – scriptural “dog whistles,” I guess – that, heretofore, have somehow eluded every biblical scholar since the Apostle Paul: “Perhaps the most consistent sexual theme in the Bible,” she declares, “is that a woman’s consent is not needed or even preferred before sex.”

“By demanding an end to rape culture,” she adds (whatever that is), “today’s young women and men are making the Bible writers look as if they were members of a tribal, Iron Age culture in which women were property like livestock and children – to be traded, sold and won in battle. Small wonder the culture warriors have ramped up their fight against contraception and abortion. Imagine if, on top of everything else, all women got access to expensive top-tier contraceptives and the power to end ill-conceived childbearing.”

Zing. Ouch. Busted. Small wonder, indeed, Valerie. (See why I said little additional commentary is required? OK, I admit it: I have considered selling my children. Don’t judge. You haven’t driven cross-country with them.)

In perfect keeping with the instinctive habits of the indigenous North American “progressive,” Ms. Tarico then goes on to make up a bunch more crap.

Of “believers in recovery” she waxes worried, while sounding the alarm over some really scary sounding pretend thingy called “Religious Trauma Syndrome,” followed with analysis most scholarly on the imaginary “relationship between religion and mental illnesses like depression, anxiety disorders and panic.”

Finally, Ms. Tarico offers hope beyond hope that “religious fundamentalism itself may one day be treatable.”

While “a mind is a terrible thing to waste,” how much more a soul? The secular-”progressive” mind is a curious thing – a waste of God’s purpose for the very soul, the very life to whom it was gifted.

This is true freedom. “It is for Freedom that Christ has set us free” (Galatians 5:5).

From the freedom of Christ stems “the fruit of the Spirit,” which is “love, joy, peace, forbearance, kindness, goodness, faithfulness, gentleness and self-control” (Galatians 5:22-23).

Without Christ, there is no freedom.

There is only death.

This is at odds with man’s fleshly desire – which began in the garden – for autonomy from God. The God-denier seeks to fill the void where Christ belongs with “acts of the flesh.”

“Those who belong to Christ Jesus have crucified the flesh with its passions and desires” (Galatians 5:24).

Those who do not – have not.

When God-deniers like Ms. Tarico dig in their heels, a pitiable paradox occurs. While they think they’ve achieved intellectual enlightenment and freedom, they have, instead, been played for the fool. They have become slaves to the flesh, and playthings to the enemy.

Ultimately, there is no autonomy. In the end we each belong to one Master or the other.

Ms. Tarico, the end is just the beginning.

And eternity is a very long time.