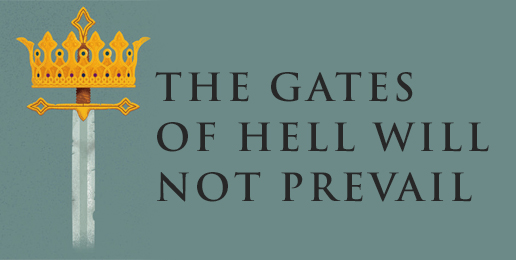 Church Has Stemmed the Tide of Evil Throughout History
11.06.19
PRINT

Cambridge Professor C.F.D. Moule once said, “The gospel is more than a declaration … It is something which we do not merely know but experience.” He continued, “The action of Christ in our world is not a dead and static thing,” but on the contrary, “a great flowing stream, not a separate draught of water; the apex of a pyramid, not an unattached point in mid-air.”

According to Moule, there will “never be an end” to the pursuit of justice and righteousness, for there is “a living God at work … through that which we call the Church, the Body of Christ.”

St. Athanasius, whom many have called the author of the Nicene Creed, once wrote, “Seeing the exceeding wickedness of men, and how little by little they had increased it to an intolerable pitch against themselves … [Christ] took pity on our race, and had mercy on our infirmity.”

He went on to conclude: “Lest the creature should perish, and the Father’s handiwork in men be spent for naught,” God “took unto Himself a Body,” a body that not only endures, lives and breathes in His resurrection but also in His church. “A blind man cannot see the sun,” said the bishop, “but he knows that it is above the earth from the warmth which it affords. Similarly, let those who are still in the blindness of unbelief recognize [what] He has brought about through His manifest powers in others,” i.e., the church.

Even those who openly place themselves somewhere along the atheist-agnostic continuum are now speaking honestly about the redemptive power of the church as described by Moule and Athanasius. For example, Fox News contributor Greg Gutfeld, who describes himself as “non-religious,” says, “I haven’t been to church in years. But there is one thing I know: The church is a positive influence in communities, in terms of encouraging charity and neighborly concern.”

Likewise, Alain de Botton, author of “Religion for Atheists,” laments the loss of “discipline, structure, community” in contemporary culture. He then goes on to come perilously close to affirming the Christian view of original sin when he says, “At heart [we are all] desperate, fragile, vulnerable, sinful creatures, a good deal less wise than we are knowledgeable, always on the verge of anxiety, tortured by our relationships, terrified of death — and most of all in need of God.”

Then there is Matthew Parris, writer for the London Times, who extols the virtues of Christian missionary work in Africa: “As an atheist, I truly believe Africa needs God … Removing Christian evangelism from the African equation may leave the continent at the mercy of a malign fusion of Nike, the witch doctor, the mobile phone, and the machete.”

Indeed, the church is the salt and light of human history. It has preserved culture in the midst of disease, debauchery and despair. It has been a beacon of hope in the darkest days of violence and oppression. Wilberforce led the British to abolish the slave trade. Mueller rescued orphans from the poverty of the industrial revolution. Bonheoffer defied Hitler. William Booth served the poor. Orange Scott, Luther Lee and B.T. Roberts fought for abolition, and Chuck Colson befriended prisoners.

Yes, the church has stemmed the tide of evil time and time again. From the killing fields of Cambodia to the prison cells of Cuba, it has been the “flowing stream” of justice. Amid plague and contagion, it has been the “apex” of care and compassion. In times of terror and war, it has been God’s “mercy on our infirmity” and His “pity on our race.”

Jesus tells us — indeed, he promises us — that the “gates of hell will not prevail” against His church. Not the Orwellian hubris of the European Union. Not the unprincipled materialism of billionaire elites. Not the moral nihilism of the West or the Muslim extremism in the Middle East. Not the “exceeding wickedness” of Planned Parenthood or the pure evil of NAMBLA. Not the child abuse of trans-activism or the comic delusions of drag queen story hours.

Not the selfish focus of “intersectionality” or the disingenuous sanctimony of the SPLC. Not the blatant arrogance of the progressive left or the transparent pandering of those who seek political power. Not the “increased intolerable pitch” of my sin or yours. Nothing can stop the “manifest power” of “a living God at work.” He is not a “dead or static thing,” but alive and well.

“Nothing in all the vast universe can come to pass otherwise than God has eternally purposed. Here is a foundation of faith. Here is a resting place for the intellect. Here is an anchor for the soul, both sure and steadfast. It is not blind fate, unbridled evil, man or Devil, but the Lord Almighty who is ruling the world, ruling it according to His own good pleasure and for His own eternal glory.” ~Arthur W. Pink

Thank God for the church.

Planned Parenthood Rep: Christianity “Going Down”
b
a
x
r