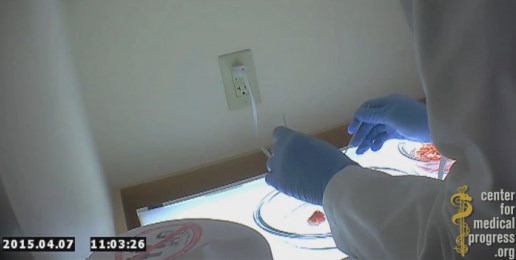 Six weeks ago, I was privileged to be in the delivery room when my seventh grandchild was born. The only response to the doctor’s words “It’s a boy” were tears of ineffable joy.

This morning I heard those same words when a Planned Parenthood medical assistant plucked casually through the bloody remains of a just-butchered baby and announced in a  jubilant tone, “another boy!” in the newest Center for Medical Progress video:

Last week, another conscience-deformed obstetrician, Dr. Jen Gutner, writing a defense of Planned Parenthood for the New Republic, criticized the use of the phrase “baby parts” when referring to the head, livers, lungs, and limbs of human fetuses:

These are not “baby parts.” Whether a woman has a miscarriage or an abortion, the tissue specimen is called “products of conception.” In utero, i.e. during pregnancy, we use the term “embryo” from fertilization to ten weeks gestation and “fetus” from ten weeks to birth. The term baby is medically incorrect as it doesn’t apply until birth. Calling the tissue “baby parts” is a calculated attempt to anthropomorphize an embryo or fetus. It is a false image—a ten to twelve week fetus looks nothing like a term baby—and is medically incorrect.

Every human being, alive or dead, is a product of conception, so technically Gutner is correct, but that’s irrelevant when it comes to whether or not we have the right to take life. It’s amusing that she said pro-life people are trying to “anthropomorphize” fetuses. It’s actually not possible to anthropomorphize a human being. To see an unborn baby as human is simply to align your perspective with reality. To de-anthropomorphize a baby in the womb is to detach yourself from reality, probably to make it easier to justify the unspeakable.

Gutner may want to have a conversation with the Denver Planned Parenthood abortionist featured in the fourth video, Dr. Sabita Ginde, because Ginde refers to the “product of conception” as a baby. She also wonders, “do people want brain?…Do people do stuff with eyeballs?” Yes, Gutner, these anthropomorphized products of conception have human brains and human eyeballs.

Gutner also argues that “Hearing medical professionals talk casually about products of conception may seem distasteful to some, but not to doctors. Medical procedures are gory by nature.”

It isn’t the “product of conception” that’s gory. It’s the crushing and dismembering of the “products of conception” that is gory. And though some people wouldn’t have the stomach for performing surgery, no one is offended by descriptions of surgery performed to restore health or function or reduce pain. What offends many Americans are barbarous surgical procedures performed to extinguish life.

“Progressives”—who take umbrage when conservatives cite religious convictions in defense of preborn babies (or true marriage)—often quote Reverend Martin Luther King Jr.’s paraphrase of a passage from a sermon by abolitionist and minister Thomas Parker who wrote this about the moral universe:

I do not pretend to understand the moral universe, the arc is a long one, my eye reaches but little ways. I cannot calculate the curve and complete the figure by the experience of sight; I can divine it by conscience. But from what I see I am sure it bends towards justice.

Parker goes on to say something at least as applicable to abortion as slavery:

Things refuse to be mismanaged long. Jefferson trembled when he thought of slavery and remembered that God is just. Ere long all America will tremble.

For 41 long years, many Americans have trembled at the thought of the legalized slaughter of babies in the womb. Ere long, it is hoped, all America will tremble.

It is a profoundly offensive violation of privacy and dignity that anti-abortion extremists entered our laboratory under false pretenses and are now broadcasting video of a part of the process for a safe abortion….Publicizing secret video footage of a woman’s abortion process is a grossly offensive act that should be rejected by all regardless of political perspective.

Ten weeks ago, my grandson Everett was no less human and no less deserving of legal protection from the death merchants at Planned Parenthood than he is now. It is almost unbearable to write what should be unthinkable:  In this country, my grandson could have been legally killed ten weeks ago—using my money—and his body parts sold donated for research.

My 90-year-old WWII veteran father—great-grandfather to Everett—is right: This is not the country he fought to defend.