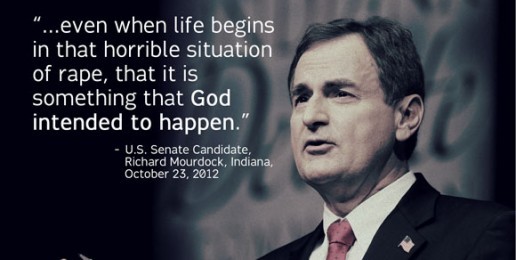 Over the years I have driven by stretches of wilderness devastated by a forest fire and wonder how such calamity could ever be rectified, how such destruction could be remedied.  Yet, as I passed those same stretches some time later I was awe struck by the wealth of life that emerged from the rubble.  Quite accurately beauty from ashes.

U.S. Senator Richard Murdock (R-IN) has been scathingly attacked by his Democrat opponents for his comments regarding the hand of God bringing forth life out of the dark evil of a rape.  He may not have stated it in the most artful words, but for those who see the hand of God at work even in the midst of tragedy, his words were not far from the mark.  Those of us who have eyes to see God at work see things a little differently.  We don’t attack Him, we thank Him.

Recall this: two thousand years ago a mob of wicked men gathered about an innocent Man, tried Him illegally, beat Him unmercifully, and hung Him upon a cruel cross.  Yet, out of that infinite injustice God provided for our salvation.  Beauty from unbelievable ugliness.  God is able to do that!  In fact, most of us do not dwell on the hideousness of the events leading up to the crucifixion due to the glory of what God produced from it.  The blame lies with the perpetrators, just as the blame for a rape lies with the rapist; but because our God is so GREAT, what He accomplished on the cross largely eclipses the shameful behavior of the mob.

Maybe, just maybe, our Great God allows that from the barbaric and evil act that a rape is an infinitely beautiful and wonderful tiny, innocent life should come into existence to help to buffer the unimaginable horror that has been inflicted upon an innocent young woman.  And, the radical left, rather than accepting the light God offers to brighten the darkness,  extinguishes it, too.

But, then again, maybe those on the left don’t know this Great God.

Or, maybe they have simply closed their eyes.  After all, they actually voted Him out of their national platform three times.