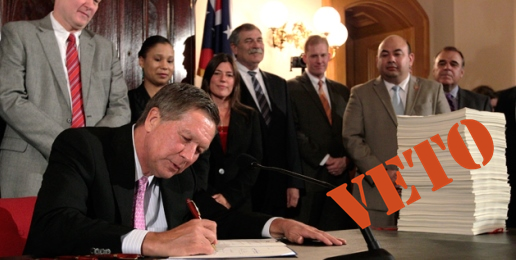 Earlier today, Gov. John Kasich of Ohio signed into law protection for the unborn at 20 weeks.  This law has an exception for abortions that are necessary to save the mother’s life or prevent serious risk of substantial bodily impairment.  The law is based on the concern that unborn humans can feel pain at 20 weeks.  Ohio joins 15 other states that protect humans from abortion at the age of 20 weeks in the womb.  Kasich vetoed a bill designed to protect unborn humans once their heartbeat can be detected, between 4 weeks and 6 weeks.

Unborn babies may be able to feel pain much earlier than 20 weeks since nerves develop around 7 weeks.  Pro-life people have been concerned for decades that unborn humans are feeling excruciating pain inside abortion clinics.  Ultrasounds of abortion earlier than 20 weeks show the unborn human reacting in a manner consistent with feeling pain.  While the pro-choice lobby scoffs at this concern, their criticism is noticeably absent when doctors give anesthesia to pre-viable babies to prepare that baby for fetal surgery.  Fetal surgery occurs when a doctor needs to perform surgery on the unborn baby, but then return the baby to the mother’s womb after the surgery because the baby is not old enough to be delivered. In these situations, when the unborn baby is a patient, pain management is understandable by everyone regardless of their view on abortion.  Yet, when the baby is scheduled to be an abortion victim, concerns about pain are criticized.  This double standard is illustrative of the double-minded way many pro-choice people approach sincere concerns about abortion.

Kasich believes in a rape exception for pro-life laws.  However, he signed this bill into law which doesn’t have a rape exception.  Pro-choice people are criticizing him for being inconsistent, but this raises some questions.  Do these pro-choice people really think it takes a woman 20 weeks to realize she was sexually assaulted?  That’s five months.  I don’t agree with Kasich on his rape exception view, but the fact is, a victim of sexual assault who decided to get an abortion would get the abortion much earlier than 20 weeks.  Perhaps these pro-choice people realize that’s the case and they’re just using the word rape to get people sad or upset.  If so, are they using the horror of rape as a political football to advance their abortion agenda?  We should all agree that it’s demeaning to rape victims to throw out the word rape just to push a political agenda.

Why Veto The Heartbeat Bill?

In his veto message, Kasich mentioned that the Heartbeat Bill goes beyond current U.S. Supreme Court rulings, it would be declared unconstitutional by the judiciary and the State of Ohio “will be forced to pay hundreds of thousands of taxpayer dollars to cover the legal fees for pro-choice activists’ lawyers.”  He also said that such a defeat “invites additional challenges to Ohio’s strong legal protections for unborn life.”  The real reason the unborn are not legally protected from the moment their heart starts beating or from the moment they are created at fertilization is because of the U.S. Supreme Court.  It would be good if Kasich signed the Heartbeat Bill into law, but the real change must occur at the U.S. Supreme Court.

What’s Next For Legal Change?

Five pro-choice U.S. Supreme Court members continue to veto the will of the people.  They are Ginsberg, Kennedy, Breyer, Kagan, and Sotomayor.  To make progress against the injustice of abortion, we need to reverse the 1973 Roe v. Wade decision.  That can occur after the Scalia vacancy is filled with a pro-life Justice and a pro-life Justice replaces one of five pro-choice members of the Court.

Meanwhile, Donald Trump can sign pro-life executive orders, can sign a federal bill protecting the unborn from abortion at 20 weeks and can defund abortion clinic chains like Planned Parenthood.  Overturning Roe is very important.  After that, defunding may have the most profound effect because many abortion clinics will close across the nation.  The defunding effort takes away federal tax dollars from abortion clinics and re-directs those dollars to Federally Qualified Health Centers to provide real healthcare to women.  Pro-life states will continue to pass pro-life legislation and pro-life people will fight to stop pro-choice legislation from passing.

What’s Next At the Grassroots?

Pro-life people need to fight the abortion clinic lobby with activism.  This is a life or death struggle that starts at the grassroots.  If we win, hundreds of thousands of lives can be saved from abortion each year. Winning means social and legal change.  We may be turning the corner with Trump, but how much progress we make depends on us being united, smart, courageous, and very active.

Lawmakers Avoid Discussions of First Principles
b
a
x
r